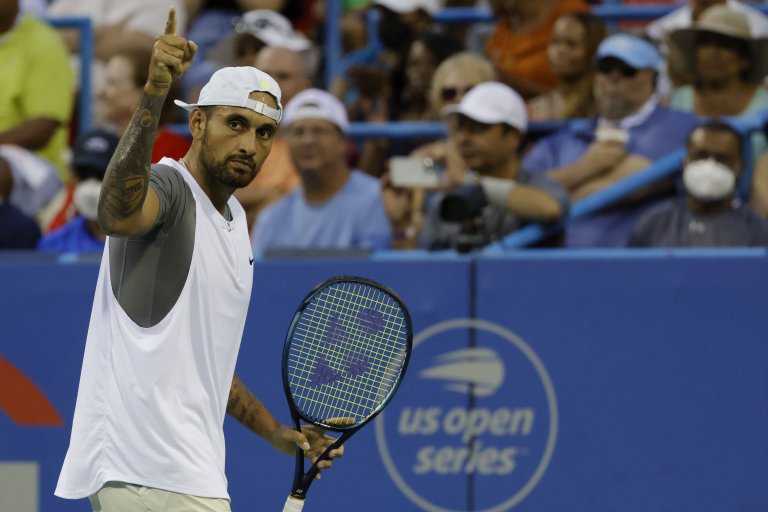 Nick Kyrgios is a big favorite against Yoshihito Nishioka in Sunday’s Citi Open singles final
Nishioka shocked No. 1 Andrey Rublev in the semifinals Saturday
Below, see the Kyrgios vs Nishioka odds, picks, and best bets for the Citi Open final

Nick Kyrgios’s 2022 season has been a renaissance, as he’s (mostly) been engaged and competitive – if sometimes fiery – in most of his matches.

In Washington, DC this week, he’s in both the singles and doubles finals and is a heavy favorite to defeat fellow unseeded player Yoshihito Nishioka.

Odds as of Aug. 7 at Barstool Sportsbook.

When he’s fully engaged, Kyrgios can beat the best in the world. But if his body often lets him down, he recovered beautifully from a late-night (early morning) marathon quarterfinal win over Frances Tiafoe that ended at nearly 1 a.m. Saturday

Ymer never had a sniff at a break point.

Then, Kyrgios and partner Jack Sock went out and won a delayed doubles quarterfinal in a match tiebreak over the French team of Mahut and Roger-Vasselin.

Nishioka is a not-dissimilar player to Ymer in the sense that he’s not especially big, but he’s very speedy and consistent.

Exhausted after his marathon win over Dan Evans, Nishioka came out and took care of No. 1 seed Andrey Rublev in an hour and 20 minutes in his semifinal Saturday.

Nishioka saving Rublev from facing Kyrgios, remembering Miami I think it is for better…pic.twitter.com/z1waJqxJTQ

Rublev has proven extremely tough to beat in ATP 500 tournaments. But not on this day; the Russian won just 31 per cent of points on his second serve.

How dominant has Kyrgios been through this week at the Citi Open?

He leads Nishioka in almost every statistical category. Both have played five matches, and Kyrgios has yet to be broken. Nishioka has had 40 break points against his serve.

Where Nishioka has been better is in his percentage of return games won. Kyrgios has won about 20 per cent of them; Nishioka has done much better at nearly 32 per cent.

Kyrgios authored the two shortest matches of the week. Meanwhile, Nishioke sweated through the three of the four longest of the week (statistics courtesy of the ATP – click here for the full report).

Kyrgios’ record against Nishioka has been pretty comprehensive. And they’ve met twice during this time of the year, in the heat and humidity of the southern U.S.

Both of those times – in Atlanta in 2016, and in Washington three years ago – Kyrgios defeated Nishioka and then won the entire tournament.

You’d expect the same on Sunday.

With the odds so heavily in Kyrgios favour, though, it’s time to look at some of the other props that can have betting value.

The odds there will be at least one tiebreak are +130.

But, given what Nishioka did to Rublev yesterday, and the fact that the Aussie must be physically and mentally exhausted by now (and ripe for a meltdown, because the plucky Nishioka is going to have plenty of support), the odds are +1050 for the Japanese lefty to pull off a straight-set shocker.