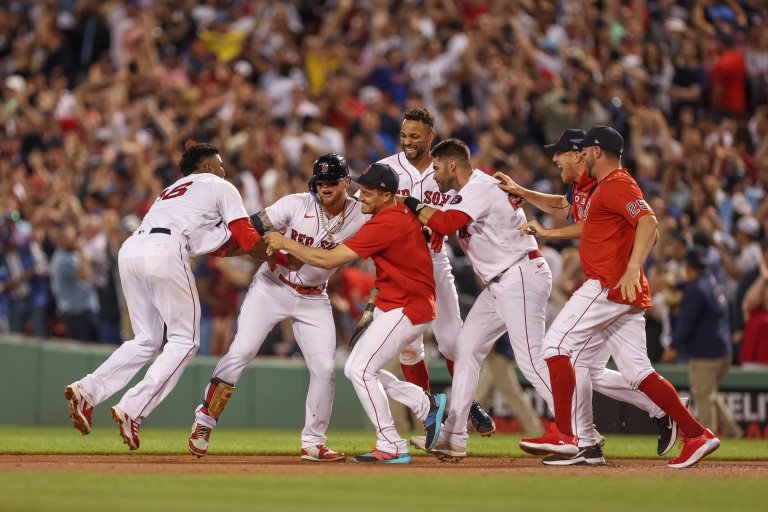 The Yankees are -130 road favorites over the Red Sox on Sunday Night Baseball
Jameson Taillon (9-2, 3.63) will pitch for New York against Nick Pivetta (8-6, 3.68)
A look at the odds and matchup can be found below with a prediction

The Boston Red Sox will try to gain a split of a four-game series when they host the New York Yankees at 7:08pm ET at Fenway Park on Sunday Night Baseball.

Odds as of July 9th at Barstool Sportsbook.

As -130 favorites, the Yankees have an implied win probability of 54.8%. The Yankees, at +400, are co-favorites in the World Series odds with the Los Angeles Dodgers while the Red Sox have odds of +3000.

The weather forecast calls for clear, a gametime temperature of 74 degrees with a low of 62 and southwest wind at 7-9 mph.

Taillon is coming off just his second loss of the season and first since April 11 when he fell to the Pirates in Pittsburgh on Tuesday. He was touched for five runs and six hits in 5.1 innings while striking out five and walking none.

It was an emotional return to his old home ballpark.

Pivetta had a three-game winning streak stopped Tuesday by the Tampa Bay Rays at Fenway Park. He was tagged for seven runs on eight hits over 5.2 innings with four strikeouts and two walks.

In four career games (three starts) versus the Yankees, Pivetta has struggled with an 0-2 record and 6.75 ERA.

Nick Pivetta was HYPED after striking out the side in the 7th. 😤 pic.twitter.com/pkqs36m8Wa

The Yankees’ Giancarlo Stanton is a .375 hitter (6-for-16) against Pivetta with two home runs. The Red Sox’s Kevin Plawecki has gone 3-for-8 with two doubles off Taillon but Jarren Duran is 0-for-5.

Alex Verdugo hit a walk-off two-run single to cap a three-run, 10th-inning and rally the Red Sox to victory Saturday night. Verdugo forced extra innings with a run-scoring single in the eighth when he tied the score at 3-3 on his way to finishing with three hits and three RBIs.

Rob Refsnyder homered and had two hits for the Red Sox, who also got two hits from Xander Bogaerts.

First baseman Anthony Rizzo returned to the lineup after missing four games with lower back stiffness and went 2-for-5 with a pair of doubles and two RBIs. Aaron Judge and Matt Carpenter also had two hits each.

The Yankees lead the season series 4-2 and hold a commanding 36-19 advantage over the Red Sox since 2019.

Neither starting pitcher inspires confidence following rocky outings Tuesday. Yet look to Pivetta to bounce back in this one as an underdog and help the Red Sox get a split with their archrivals.