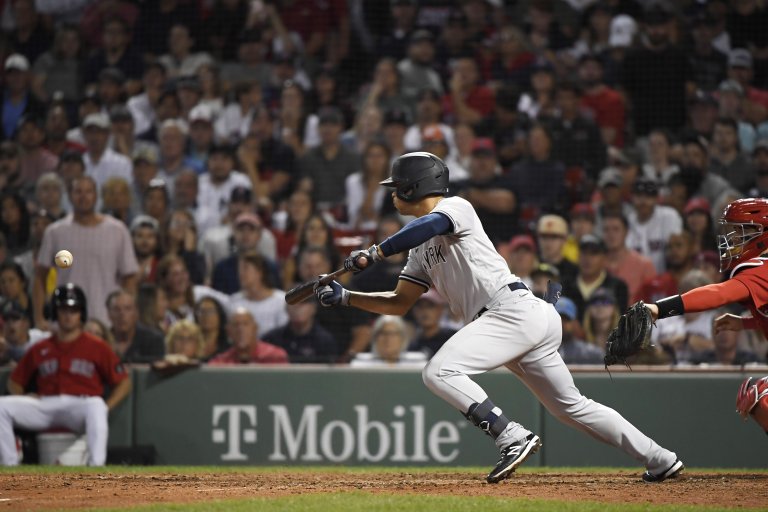 The New York Yankees and Boston Red Sox face off at Fenway Park on Sunday, August 14th
Yankees have struggled after a blistering start, while Red Sox have been in the bottom half of the AL East
Read below for the Yankees vs Red Sox odds and betting preview

The New York Yankees (72-42) face the Boston Red Sox (56-59) on Sunday at Fenway Park – the finale of a three-game series between the rivals that has a scheduled first pitch of 7:05 pm ET. Aaron Boone’s club will send Jameson Taillon to the mound, while Alex Cora’s group counters with Michael Wacha.

The Yanks are favorites in this one and heavy -10000 favorites to win the AL East. Meantime, Boston has +50000 longshot division odds in the MLB Division odds.

Odds as of August 14th at Caesars Sportsbook.

The 30-year-old Taillon is in the middle of his best season since going 14-10 with a 3.20 ERA in 2018 as a member of the Pirates. His .846 winning percentage currently leads the American League and New York has gone an impressive 17-5 in his starts, of which seven have been quality turns. But he’s gone at least five innings 16 times in 2022 and been a consistent performer in Boone’s rotation.

Aaron Boone praises Jameson Taillon’s strong 7 innings of work: “It was a big-time effort by him. We needed it.” pic.twitter.com/mmoE06weAe

He went seven innings against the Mariners in his most recent appearance last Monday, allowing three hits, three earned runs, and three walks while striking out six in a 9-4 victory.

Meantime, Boston has gone 9-4 in Wacha’s starts in 2022 — three of which have been of quality vintage. The 31-year-old veteran is making his first start since June 28th, having missed the last six weeks with right shoulder inflammation. He’s impressed during his first 13 starts with the Red Sox, producing a 2.69 ERA in 70 ⅓ innings. Judging by his last rehab start, the former All-Star appears ready for his big league return.

Michael Wacha retired the first 13 batters he faced in Triple-A Worcester, walked a batter, then bounced back with a K. He struck out 8 of 15 batters faced and was 93-95mph.

With the Red Sox rotation struggling all season – Rich Hill was hurt before his recent return and Nick Pivetta has underperformed since July – a strong start by Wacha would give Boston’s bullpen a much-needed break.

The Yankees bounced back on Saturday 3-2 to even the series with the Red Sox after losing on Friday in extra innings by the same score. Isiah Kiner-Falefa was the offensive hero for New York, going 3-for-4 and driving in all three runs, along with launching his first homer of the season.

Despite the victory, the Bronx Bombers have still dropped nine of their last 12 and are only 11-19 since July 9th. A big factor in their slide is probably injuries to key players like Giancarlo Stanton and Matt Carpenter. Of course, Aaron Judge is still the AL MVP favorite.

Meantime, the Sox have been a disappointment this season. And while Xander Bogaerts hasn’t lit the world on fire, he’s chugging away. The shortstop was 1-for-5 on Saturday with a double and has been especially proficient on grounders. The 29-year-old has an astonishing .364 batting average on wormburners this season. That’s the highest in the majors for batters who have seen a minimum of 1,500 pitches.

Xander Bogaerts recorded his 300th career double in the first inning of tonight’s game, becoming the 4th shortstop (min. 90% of games at short) with 300 doubles and 150 home runs within his first 10 seasons.

The others: Nomar Garciaparra, Hanley Ramírez and Miguel Tejada. pic.twitter.com/RrQrPqlAOp

The Red Sox currently have +30000 odds to win the Fall Classic, while the Yankees are at +450 in the World Series odds.

The Yankees have a sparkling record when Taillon gets the ball. Wacha has been great for the Red Sox — but this is his first time in action since late June. I’m trusting New York in this spot.

Boone’s group may be undermanned. But so is Alex Cora’s (no Rafael Devers, no Trevor Story). Go with the visitors in this spot.