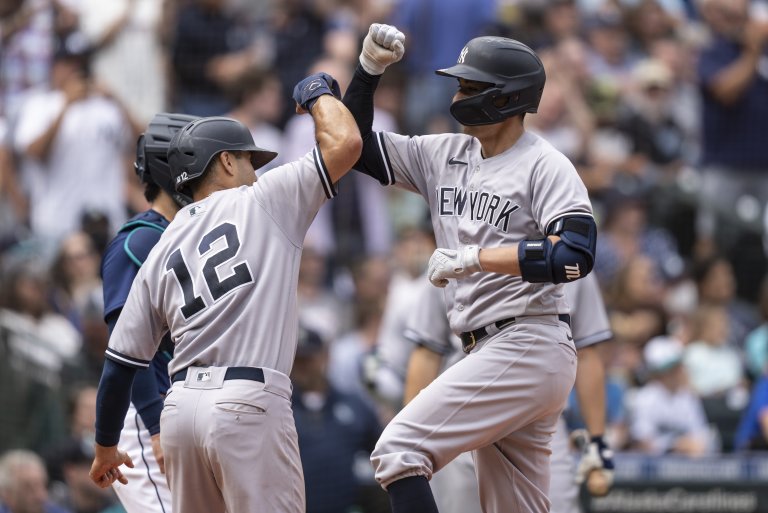 The Red Sox entered play on Thursday losers or four straight and 23 of their past 32 games overall. Oddsmakers expect their woes to continue, as New York opened up as the road chalk.

The Yankees are currently -130 moneyline favorites, in a contest that features a total of 9.5. First pitch is scheduled for 7:10pm ET at Fenway Park in Boston, Mass, with clear skies and 73 degree game time temperatures in the forecast.

The Yankees have seen their World Series odds lengthened to +450 after an uncharacteristic rough patch – more on that later. They’ll give the ball to Domingo German, who’s looking to put together his fourth consecutive strong start.

Last time out, he threw 5 innings of one run ball versus the Cardinals, scattering four hits while striking out three. He’s yielded just three runs total in 10 innings this month, and given how good his offense is New York won’t be asking a lot of him.

German posted a 2.55 ERA in three starts last season against Boston, striking out 16 batters in 17.2 innings.

The Red Sox meanwhile, will look to Nathan Eovaldi to stop the bleeding. The 32-year-old was fantastic in two June starts pitching 11 scoreless innings, but it’s been downhill ever since.

Eovaldi was tagged for seven hits and four runs last time out against light-hitting Kansas City, and has surrendered 23 runs in his last 25.1 innings of work.

He owns a 5.79 ERA in two starts against the Bronx Bombers this season, while current Yankee hitters are batting .247 against him over 176 career at-bats.

New York has lost eight of 10 games coming in. Despite the struggles, their lead atop the AL East remains at 10 games. They have a +204 run differential, the most in the AL by 80 runs, and are still producing runs at a strong rate. They’re slugging and OPS over the last two weeks is just slightly below their season long marks.

The Yankees have now lost 7 of 8 and are 19-23 since June 24. The Dbacks, Royals, Reds and Cubs all have a better record than New York over that span, and they are objectively not good baseball teams.

They are dealing with injuries as Giancarlo Stanton remains out with a mysterious Achilles issue, while Matt Carpenter has a broken foot. They did get Anthony Rizzo back on Wednesday after a five-game absence, and his left-handed bat will come in handy this weekend. Rizzo is on pace for 35+ homers for the first time in his career.

The Red Sox lineup on the other hand are in a major funk. They’re batting just .232 in August with a .282 OBP. They’re averaging four runs per contest, half a run fewer than their season average, and are only hitting .217 against Yankee pitching in 10 outings.

To make matters worse, their pitching has been abysmal. Boston’s staff has a 5.76 ERA this month, while coughing an opponent batting average of .289.

There’s reasons to be concerned about backing both teams in this matchup, but we should place much more confidence in New York.

The return of Rizzo will give their lineup a boost, while the team has raked against Eovaldi and the rest of the Red Sox pitchers this season. New York is averaging 7.3 runs per game against Boston, boasting a slash line of .279/.374/.497.