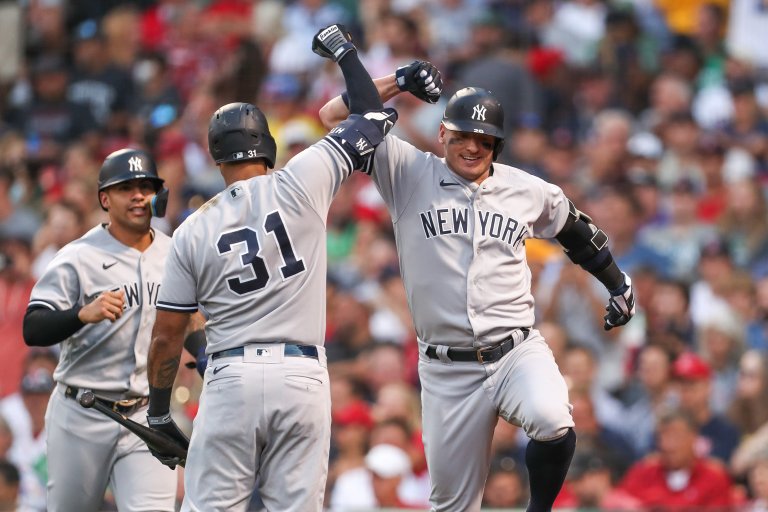 Baseball’s most storied rivalry is reignited this weekend as the Yankees and Red Sox play a four-game set. New York entered the series with a commanding 14-game lead over its AL East foe atop the division, and oddsmakers are bullish on the Bronx Bombers on the road in Game 2.

The Yankees opened up as a -155 moneyline favorite, in a game with a total of 9.5. First pitch is scheduled for 7:10 pm ET at Fenway Park in Boston, Mass, with partly cloudy skies and 81 degree game-time temperatures in the forecast.

New York, the leader in the World Series odds, will give the ball to Nestor Cortes. The southpaw has exceeded all expectations this season, posting a 7-3 record, with a 2.44 ERA and a minuscule 0.95 WHIP. He’s fresh off 6 innings of one run ball against Cleveland, which marked the 11th time this year’s he’s yielded two runs or less.

He’s posted a 4-3 record on the road, with an opponent batting average of .225, but his history versus the Red Sox lineup is slightly worrisome. Boston batters are hitting .352 against him over 37 at-bats with four homers.

The Red Sox meanwhile have seen their starting rotation decimated by injuries. As a result, they’ll turn to Connor Seabold on Friday, which must be music to the Yankees’ ears.

Seabold has a career 7.71 ERA in three big league starts, allowing 18 hits and 10 runs over 11.2 innings. He’s faced one elite lineup this season, and Toronto smacked him around. The Blue Jays touched him up for seven runs, nine hits and three homers over 4.2 innings, and there’s no reason to think the Bronx Bombers won’t have plenty of success as well.

New York took Game 1 of the series 6-5 despite playing without both Anthony Rizzo and AL MVP odds favorite Aaron Judge. Rizzo has now missed three straight games with a back issue, while Judge was given a day off to rest some lower body soreness.

Aaron Judge has 30 home runs before the All Star break! pic.twitter.com/WNf6O5KgGR

Judge will be back in the lineup Friday, and is fresh off smacking his 30th home run last time out. He’s now reached the 30 home run plateau twice in his career before the All-Star break, making him the only Yankee to do so.

New York enters play having won eight of 11, outscoring their opponents by 35 runs. They’ve yielded an average of less than three runs per game during that stretch, and lead MLB in runs per game, home runs and OPS.

After Thursday’s loss to the Yankees, the Red Sox have now dropped seven of their past 10. They’ve been outscored 21-10 in their last three outings, and are batting just .245 with an OBP south of .300 over the past week.

It’s not all bad news for Boston however, as Rafael Devers is tearing the cover of the baseball. The 25-year-old has three consecutive multi-hit games, and smacked two home runs against New York in the series opener.

If you’re looking to target a Red Sox hitter in the props market Devers is your man. He’s 2-for-5 lifetime against Cortes, with two home runs and five RBI.

The Bronx Bombers have taken six of the last seven meetings against Boston and there’s plenty of reasons to think their dominance will continue on Friday. New York has a significant advantage in both the hitting and pitching department, and also boast MLB’s highest winning percentage on the road.

Play them on the moneyline, and look to target Devers in the prop market, specifically in the home run and total bases categories.