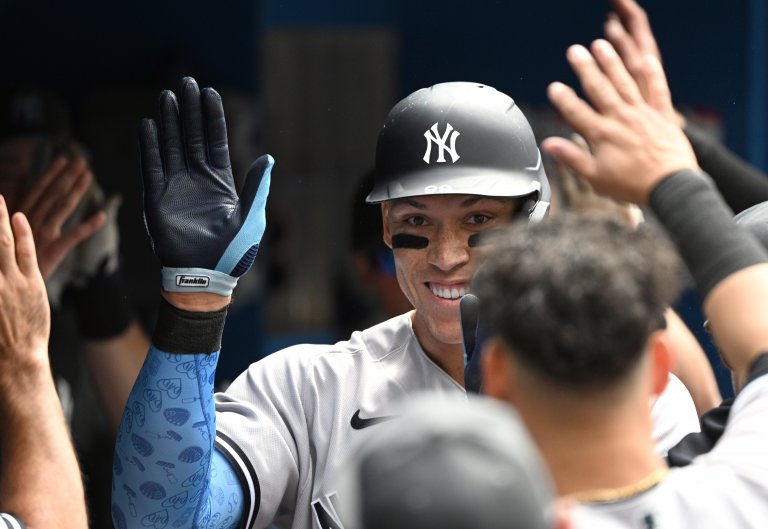 The Yankees vs Rays odds favor New York as -130 moneyline favorites on Monday (June 20th, 7:10 pm ET)
New York will send Gerrit Cole (6-1, 3.63 ERA) to the mound, while Tampa Bay will counter with Shane McClanahan (7-3, 1.84 ERA)
Read below for the Yankees vs Rays odds, analysis and betting prediction

Fresh off their sixth straight series victory, and 16 wins in their past 18 games, the league leading Yankees travel to Tampa Bay on Monday to open up a three game set with the Rays. These two teams just met last week in the Bronx, and it resulted in a three game sweep for New York.

The Yankees have had their way with nearly every opponent they’ve faced so far this season, and oddsmakers are expecting another victory from them in the series opener against Tampa Bay.

New York opened up as -130 moneyline favorites, in a contest that features a total of 6.5. First pitch is scheduled for 7:10 pm ET inside Tropicana Field in St. Petersburg, Florid.

The Yankees, who have finally pulled even with the Dodgers atop the World Series odds board, will give the ball to ace Gerrit Cole. The righty neutralized the Rays just last Tuesday, shutting them out over 6 innings while fanning seven. That start helped him bounce back from arguably the worst outing of his career against Minnesota, and it marked the second time this season he’s dominated Tampa Bay.

This is why you paid him all that money. pic.twitter.com/6ak3SDZBc8

Three weeks ago, he yielded only one run and two hits over 6 innings, while striking out 10 in Tampa Bay. Rays hitters are batting only .167 against him this season through two games, with zero extra base hits.

Tampa Bay will counter with Shane McClanahan, who is the current favorite in the AL Cy Young odds. The 25-year-old suffered his first loss since April last Wednesday against the Yankees, coughing up three hits, four runs and two homers.

Just one of those runs was earned however, which marked the eighth straight start he’s surrendered two earned runs or less. The Southpaw had won his previous six decisions leading up to last Wednesday, and leads the Majors in strikeouts (105) and WHIP (0.86).

💯 reasons why Shane McClanahan is the real deal. pic.twitter.com/ERYajwtccL

He’s held the mighty Bronx Bombers to a .222 batting average this season through 12 innings, while allowing 10 hits and striking out 14.

Given the strength of New York’s lineup, it’s absolutely shocking McClanahan has had their number to the extent that he has. The Yankees are fresh off crossing the plate 25 times in a three-game set versus Toronto, and lead MLB in runs per game, home runs, slugging percentage and OPS.

There is not a weak link in their lineup, and four players already own a WAR of 1.5 or higher. That list is led by Aaron Judge, MLB’s home run king and the leading contender in the AL MVP odds.

Babe Ruth had 24 HR’s through 62 games played in a season that he finished with 60 in.

Not to be outdone, Anthony Rizzo (18 HR) is on pace for 40 home runs, while Gleyber Torres (13 HR, 32 RBI) has found the slugging form he flashed in his first two seasons as a pro. Don’t forget their lineup also includes Giancarlo Stanton, Josh Donaldson, and DJ LeMahieu among others. It really is a nightmare matchup for anyone.

Tampa Bay on the other hand, is not so imposing. The Rays managed just four runs last week while getting swept by New York, and followed that up by crossing the plate just seven times while losing two of three to Baltimore over the weekend.

Over the past month, Tampa Bay is batting just .222, while averaging 3.5 runs per game. Entering play they rank bottom-five in slugging and OPS, and you’re simply not going to threaten the Yankees with those lowly numbers.

McClanahan may be a tough matchup, but it’s not like New York has never had success against him. They roughed him up for 17 hits and eight runs over 12 innings last season, while hitting .327 in the process. The way the Bronx Bombers are swinging the bats I’d be hard pressed to fade them against any pitcher.

Throw in Cole’s track record this season versus Tampa Bay, coupled with how lousy the Rays are swinging the bats, and the Yankees moneyline looks like a pretty compelling wager.