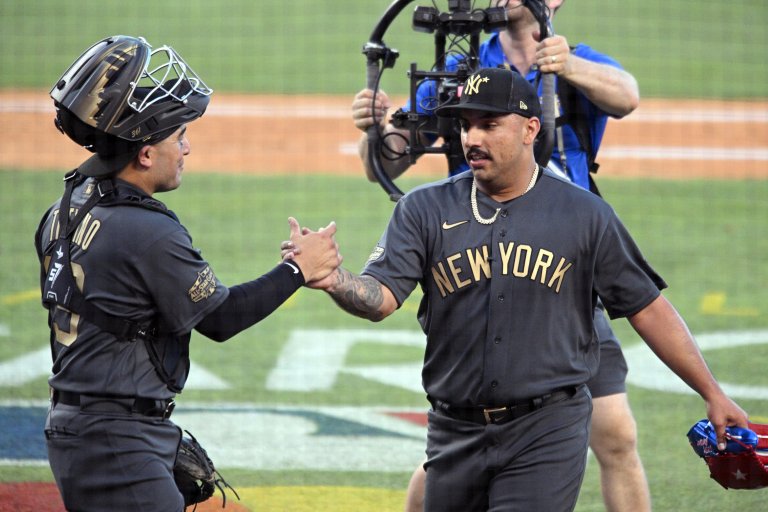 The Yankees are -139 road favorites over the Cardinals on Friday night
Lefty Nestor Cortes Jr. (9-3, 2.53) will start for New York against Dakota Hudson (6-6, 4.10)
A look at the Yankees vs Cardinals odds can be found below with a pick

The American League East-leading Yankees (70-36, 41-15 home), who were off Thursday, have lost three of their last four games, including 7-3 to the Seattle Mariners on Wednesday in New York.

Odds as of August 4th at Barstool Sportsbook.

The Yankees are -139 favorites, giving them a 58.16% expected win probability. The Yankees are co-favorites with the Los Angeles Dodgers in the World Series odds at +390.

The weather forecast calls for partly cloudy with an 85-degree gametime temperature, a low of 75 and southeast wind at 3-5 mph.

Cortes has not lost in his last six starts, going 3-0 with a 3.03 ERA. He got the win against the visiting Kansas City Royals last Saturday when he allowed two runs and five hits over five innings with five strikeouts and two walks.

“Under this body, there’s a guy that’s athletic” – @Cortes_1210 pic.twitter.com/LZinSgVB5m

This will be the first time Cortes has faced the Cardinals in his career. His AL Cy Young odds are +6000.

He lost to the Nationals last Saturday in Washington in his first start after missing 15 days with a strained neck. Hudson worked 4.1 innings and gave up two runs, four hits and two walks while striking out one.

The #STLCards have activated RHP Dakota Hudson (neck strain) from the 15-day IL.

RHP James Naile has been optioned to Memphis (AAA).

Hudson will also be facing the Yankees for the first time.

The Yankees’ Anthony Rizzo is 2 for 5 versus Hudson with the hits being a double and home run. Albert Pujols is the only Cardinals’ batter to face Cortes and hit a home run in his lone plate appearance.

Lars Nootbaar hit a tying sacrifice fly in the seventh inning and the game-winning single in the ninth inning to lift the Cardinals to victory over the Cubs in the first game of Thursday’s doubleheader.

In the second game, Tyler O’Neill hit a three-run homer in the seventh inning to break a 2-2 tie and help the Cardinals get the sweep.

Tommy Edman had three hits and two RBIs for the Cardinals. Goldschmidt had two hits and Nolan Arenado belted a two-run homer.

Kyle Higashioka provided the Yankees’ highlight in their loss to the Mariners on Wednesday with a two-run home run. He and Isiah Kiner-Falefa each had two of New York’s five hits.

The teams are playing for the first time since 2017 when the Yankees swept a three-game series at home. The Yankees hold a 9-3 edge over the Cardinals since interleague play began in 1997.

Cortes has blossomed into one of the AL’s best pitchers this season. Let’s ride with him here against the inconsistent Hudson.