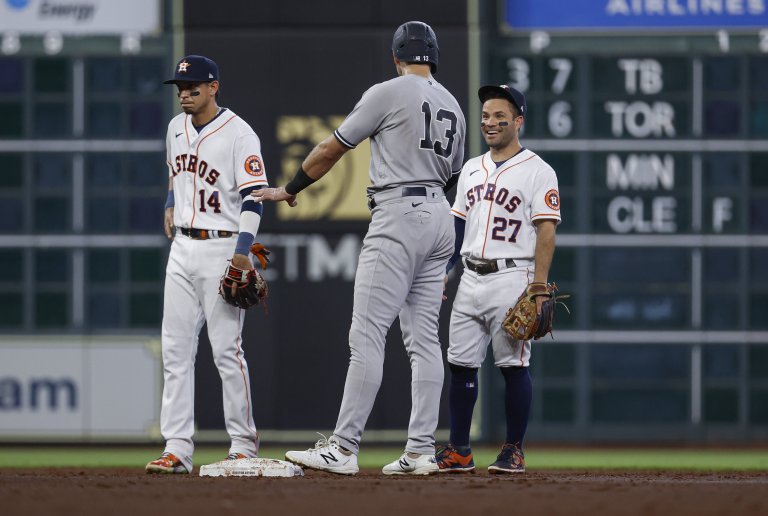 The Houston Astros are -125 home favorites over the New York Yankees in an American League afternoon game scheduled for Thursday, July 21
This game is part of a day-night doubleheader, as both teams are making up games lost in April to the MLB lockout
Below, get the Yankees vs Astros odds, picks, and betting trends

The New York Yankees (64-28, 27-16 away) and the Houston Astros (59-32, 28-14 home) were the two best teams in the American League through the first half of the MLB season. They’ll get the post All-Star Game break slate of games underway with a doubleheader against each other.

Houston owns a 3-2 straight up record against New York this season. The Astros won 2-1 in a previous game at Houston between the two clubs on June 30. Houston also took two of four games at Yankee Stadium between June 23-26.

Oddsmakers are leaning slightly toward the home team in the opener of this twin bill. It’s the Astros being established as the -125 favorites. The Yankees are an MLB-best 4-1 (.800) against the runline as a road underdog this season.

First pitch at Minute Maid Park is set for 1:10pm ET on Thursday, July 21. Cloudy skies are in the weather forecast, with 13 mph wind and a temperature of 102 degrees.

Houston is a -178 favorite, giving the Astros an implied probability of victory of 64.03% in the MLB betting line. A successful $10 wager on Houston would deliver a payout of $15.60.

The MLB betting trends are showing the public leaning solidly toward the Astros. Houston is drawing 88% of runline action and 77% on money line bets. The under is the pick in the total at 82%. Three of the past four Yankees-Astros games played at Houston have gone under.

In the MLB Division odds, the Yankees are showing as the -200 odds-on favorites to win the AL East. Houston is listed as the -350 chalk to win the AL West. The MLB pennant odds display the Yankees as the favorites at +175, with the Astros as #2 betting choice at +215. In the World Series odds, New York is given a betting line of +400, while odds of +500 are available on Houston, leaving them as the 2-3 picks in this betting market.

The Yankees are indicating that right-hander Jameson Taillon and left-hander Jordan Montgomery which pitch either end of this doubleheader. However, they’ve not announced which will pitch each game.

Jameson Taillon is a warrior pic.twitter.com/rYMidWkIV9

Astros right-hander Cristian Javier is coming off his worst back-to-back starts of the season. He took successive losses while allowing 8 earned runs, six walks, nine hits and three home runs over a combined 8.2 innings of work.

Javier worked seven hitless, shutout innings and struck out 13 and got the win as part of a shared no-hitter in a 3-0 road verdict over the Yankees on June 25. He’s struck out at least 10 batters in three of his last four starts.

The Yankees show almost no success at the plate whatsoever when facing Javier. Isiah Kiner-Falefa is 3-for-12 (.250) with a solo homer. Joey Gallo (1-for-14, .071) is the only other New York batter to reach base safely against Javier.

#OTD in 2021, Jose Altuve walked it off. pic.twitter.com/EAS95CUTMv

Houston’s Jose Altuve has slugged 11 homers in 57 games against the Yankees.

New York holds a 4.5-game lead over Houston for the best record in the AL and with it, home-field advantage in the ALCS. The Astros will want to be sweeping this doubleheader to quickly narrow that gap.

Cristian Javier & the Houston Astros combined for a no-hitter on the best team in baseball ! ? pic.twitter.com/xihcxYGcBg

Javier’s success against the Yankees should get them off to a winning start. New York leads the majors with 5.40 runs per game but the Yankees are batting .093 vs Houston pitching this season.