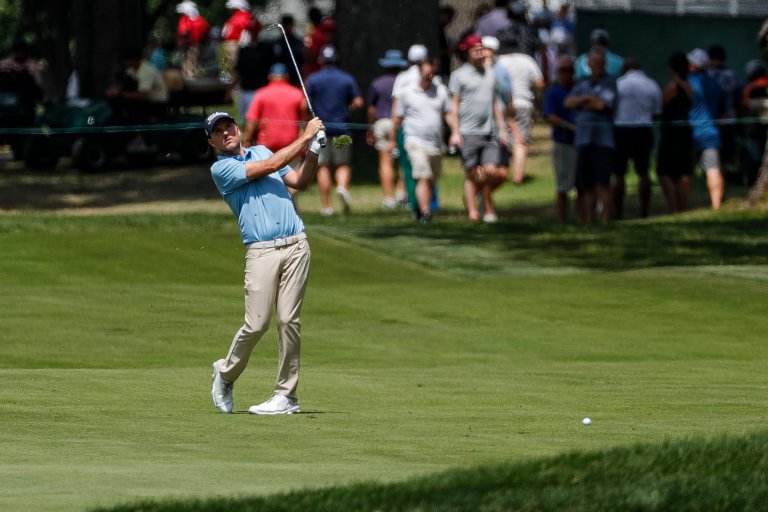 Russell Henley hits from the second fairway during Round 3 of the Rocket Mortgage Classic at the Detroit Golf Club in Detroit on Saturday, July 30, 2022.

The Wyndham Championship in Greensboro, North Carolina, tees off Thursday, August 4th, 2022
Will Zalatoris and Shane Lowry are +2200 co-favorites to be atop the leaderboard after day one
See the best bets and Wyndham Championship first-round leader odds in the article below

The final regular-season PGA Tour event of the season heads to Sedgefield Country Club for the Wyndham Championship. It’s the final opportunity for those outside the top-125 on the FedEx Cup points list to jump inside to make the playoffs. Will Zalatoris and Shane Lowry have no reason to worry about that, as they’re comfortably in, and they represent the co-favorites to win the title.

The only top-20 players competing are Zalatoris and Billy Horschel. That means there are plenty of opportunities for sleepers and longshots to make some noise given the relative lack of high-end talent competing this week.

Odds as of August 2nd at DraftKings Sportsbook.

The forecast calls for it to be mainly sunny throughout the day with a risk of thunderstorms in the early evening. Temperatures will be mid 70’s for those teeing it up first, hitting low 90’s for those playing in the afternoon. The wind will be pretty docile for the duration of Thursday, with gusts reaching between seven and eleven miles per hour.

Si Woo Kim (1:11pm tee time) has a brilliant track record around Sedgefield Country Club. It was the site of his first PGA Tour triumph, when he won it in 2016. He’s had quite a few brushes with the title after that, most notably last year, where he dropped a playoff.

In his last twelve spins around this course, his ‘strokes gained’ stats are fantastic.

The last three years at this championship, Kim has gone 5th, T-3rd, T-2nd. He’s also coming in with some strong form, posting back-to-back top-15’s, including one at the Open Championship.

Russell Henley (1:22 pm) has made a habit of getting off to strong starts on the campaign. Of those competing this week, he’s tops in scoring average on Thursday’s, with a mark of 68.56. He had been coming off a lull in his play, but rebounded with a T-10th last week in Detroit.

The other thing going for Henley was his dominance last year at this tournament, until a 72nd hole bogey made him miss the six-man playoff by a single stroke. He had been leading the tournament wire-to-wire up to that point.

That resulted in his second straight top-10 at the Wyndham. In his last eight rounds at this track, the Georgia native ranks fourth in strokes gained: tee-to-green, and fifth in total strokes gained.

Scott Stallings (1:44pm) has put together a string of strong performances, racking up three straight top-10 finishes. Those were a T-8th at the Travelers, T-4th at the John Deere and T-10th at last weeks Rocket Mortgage Classic.

In his last twelve rounds, Stallings has tremendous statistics across the board.

With his recent fantastic run, one would think his odds would be shorter than +6500 to jump ahead after 18 holes. There is a slight caution to consider in that he hasn’t been particularly strong at this course in his career. However, given his recent play, Stallings is most certainly a viable option as a sleeper contender.