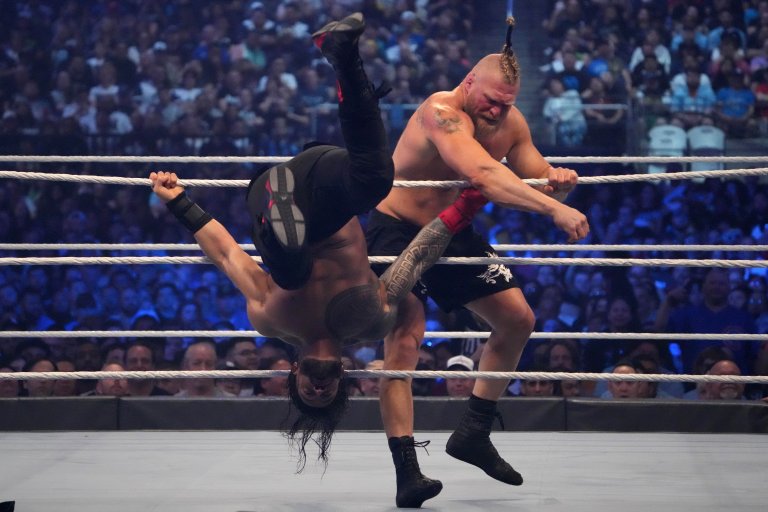 WWE SummerSlam 2022 will take place on Saturday, July 30th, 2022 in Nashville
Roman Reigns and Brock Lesnar will finally finish their feud in a high-stakes main event
Who do betting odds favor emerging victorious in each bout? See odds, analysis, and our best bets below

As one of WWE’s biggest events of the year, SummerSlam this Saturday, July 30th promises to be a blockbuster, especially with it being the company’s first pay-per-view with Triple H at the creative helm.

Vince McMahon’s recent retirement has left fans optimistic that SummerSlam will mark the dawn of a new era for the product. Every advertised matchup has potential, though it will be the night’s biggest bouts that make or break the show.

Ahead of the anticipated event, let’s take a look at the favorites that are expected to emerge victorious at WWE SummerSlam 2022, according to our own betting odds and analysis.

While not a full-time member of the roster, Pat McAfee always impresses any time he steps inside the squared circle. As of late, he’s found the perfect foil in Happy Corbin, who is in desperate need of a notable victory on a big stage.

The SmackDown announcer is currently 1-3 in his WWE career, but a loss to Corbin would hardly hurt his popularity considering he doesn’t wrestle regularly. This one could easily go either way as both men can bounce back from a loss, but Corbin could benefit more from this victory and thus the odds are in his favor.

Logan Paul is one of the most famous social media influencers in the world and an incredible athlete to boot, as seen in his WWE debut match at WrestleMania 36. Unlike like the other wrestler vs. celebrity match (McAfee vs. Corbin), Paul winning here is virtually guaranteed.

At -1900 on the moneyline, Paul is the heaviest favorite in the WWE SummerSlam 2022 odds. He’s been prominently pushed as a “fan favorite” in recent weeks (despite fans not taking to him in that role) and Miz loses nothing from eating defeat against a star of his caliber.

In this rematch from their Money in the Bank barn burner, Jeff Jarrett will serve as a special guest referee to ensure there is a decisive winner this time around. Usos have been champions for over a year, but SummerSlam could be the night they finally lose their coveted titles.

With The Bloodline still going strong, Usos retaining is always the safest bet, including at this event. A Street Profits title win is possible, but a Montez Ford singles run post-SummerSlam is more likely. The 2022 WWE SummerSlam 2022 odds suggest this will be the closest fight Saturday.

Morgan is going to be positioned as the ultimate underdog as SmackDown Women’s champion. Although the odds will be stacked against her when she defends against former champ Ronda Rousey, Morgan is still the smartest pick in this outing.

It wouldn’t be unlike WWE to put the belt right back on the ex-title holder after only one month, but things should be different during the Triple H regime. Morgan has been riding a wave of momentum this past month and any other outcome would be the wrong one.

Bianca Belair and Becky Lynch are no strangers to one another, specifically at SummerSlam. Belair exorcised her demons when she avenged her loss to Lynch at WrestleMania 39, but Lynch looking for another shot at the strap puts Belair’s reign as Raw Women’s champion in jeopardy.

Lynch getting the belt back mere months after losing it would be a step backward. Belair needs a defining defense as champ and this should be it before moving on to other challengers. The WWE 2022 SummerSlam odds give her 67% implied probability to prevail.

It’s the match that’s been done to death in WWE since 2015 yet still the biggest bout WWE can do at the moment. The “last time ever” tagline has been heavily touted heading into the event, and with that being the case, there can be no doubt that Reigns must walk out the winner.

One last time. One last match. Last Man Standing. @HeymanHustle leads Undisputed WWE Universal Champion @WWERomanReigns into battle against @BrockLesnar at #SummerSlam LIVE this Saturday streaming at 8E/5P exclusively on @peacockTV in the U.S. and @WWENetwork everywhere else! pic.twitter.com/Q7WPHQ5LQi

Lesnar gains nothing from being the one to end Reigns’ historic, dominant title run. The fall of The Tribal Chief should be imminent, but not at the hands of Lesnar. There’s a reason the six-time champion is a -400 favorite in the 2022 WWE SummerSlam odds.