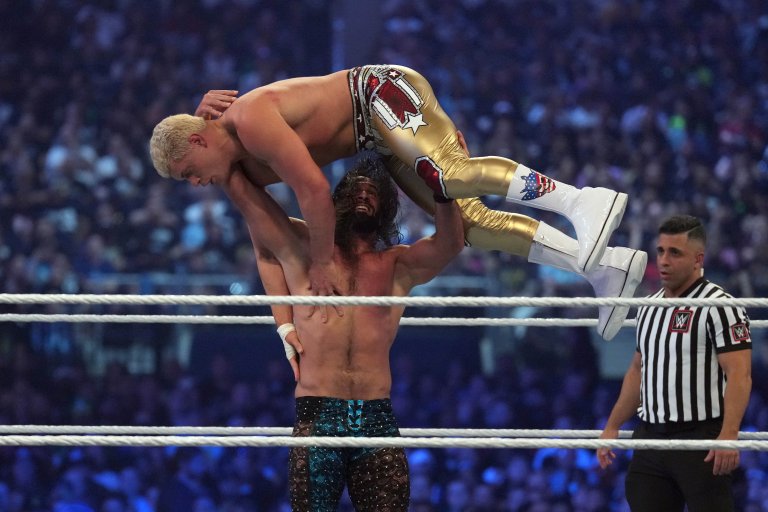 WWE Extreme Rules 2022 will take place on Saturday, October 8th, 2022 in Philadelphia
Every advertised match will carry an “extreme” stipulation
Who do betting odds favor emerging victorious in each bout? See odds, analysis, and our best bets below

WWE Extreme Rules was originally touted as the company’s most hardcore night of the year but was greatly devalued over time having lacked the stipulations that made it special in the first place.

The 2022 installment looks to restore the excitement that has long been missing from Extreme Rules with a stacked six-match card, headlined by WWE’s first-ever Fight Pit match between Matt Riddle and Seth Rollins.

Ahead of the anticipated event, let’s take a look at the favorites that are expected to emerge victorious at WWE Extreme Rules 2022, according to our own betting odds and analysis.

On the eve of Extreme Rules, Gunther will defend his Intercontinental Championship against Sheamus. There’s a strong possibility Sheamus walks out with the title, and if he does, Imperium will avenge the loss with a win in six-man tag team action the following night.

At #ExtremeRules, The #BrawlingBrutes and #Imperium will look to rip each other apart in a Six-Man Tag Team Good Old Fashioned Donnybrook Match!https://t.co/1dCwUyIHJ0 pic.twitter.com/2wbUVzppzc

The opposite is bound to be true, which would see Gunther keep the gold but Brawling Brutes stand tall in the end on Saturday night. This will be an all-out war right up the alley of Sheamus and company.

Karrion Kross made his shocking return to WWE immediately following SummerSlam by setting his sights on Drew McIntyre, making an enemy out of the face of Friday nights in the process.

The two have tormented each other in every way possible in recent weeks, but the outcome of this collision will be crucial in determining Kross’ chances at attaining super stardom in WWE. Kross winning is imperative and the best bet for this bout, but McIntyre pulling out the victory following his devastating loss to Roman Reigns at Clash at the Castle isn’t entirely out of the question.

At +150 to Ronda Rousey’s -150, Liv Morgan shouldn’t be the underdog in the odds as SmackDown Women’s champion. However, Rousey’s credentials dwarf Morgan’s, not to mention she poses the ultimate threat to the title.

Morgan only escaped from her past battles with Rousey unscathed thanks to extenuating circumstances. In a fair fight (albeit with no rules), Rousey has Morgan beat and should be expected to leave this event with the gold in her grasp.

Damage CTRL has dominated the entire WWE women’s division since arriving on the scene at SummerSlam and have already procured the WWE Women’s Tag Team Championship. Bayley winning the Raw Women’s Championship in this Ladder match would make every member a champion and complete their takeover.

??? I’m a menace!!!!!!!! I’ve been manifesting, visualizing, and obsessing over ladder matches since my Hardy Boyz/Edge & Christian days. Bianca can’t even begin to comprehend what that means, but she’s really done for this time. ???#ExtremeRules pic.twitter.com/R44g9XPIlW

That said, Belair has had such a stranglehold on the title that it’s difficult to imagine her losing it here. Both women have an equal chance of winning, hence the tied odds, but Bayley emerging victorious might be the slightly safer pick because Belair being back in chase mode would freshen up their feud.

Edge has been the biggest thorn in the side of The Judgment Day since his exile from the group at the start of the summer, and now all the bad blood boils down to this. Most notably, he’s beaten the group whenever it has mattered most on pay-per-view, and thus Edge beating Balor at Extreme Rules would be pointless.

Similar to McIntyre vs. Kross, Edge can easily win and Judgment Day loses whatever credibility they have left, but the powers that be in WWE have to know Balor coming out on top is the way to go. Balor leading in the odds at -250 gives him that advantage.

No match is more anticipated on the Extreme Rules card than the first-ever Fight Pit matchup in the history of the main roster. Matt Riddle is the perfect person to be taking part in it given his involvement in the inaugural installment in NXT, and it serves as the perfect culmination for his feud with Seth Rollins after many months.

[email protected] vows to become the “King of the Fight Pit” at #ExtremeRules. #WWERaw pic.twitter.com/08YO3vvA5z

Riddle has gotten attacked by Rollins at every turn throughout their rivalry and this should be where he finally scores that decisive victory, making him the heavy favorite here. UFC Hall of Famer Daniel Cormier serving as the special guest referee only helps his cause and tips the odds a bit more in Riddle’s favor.