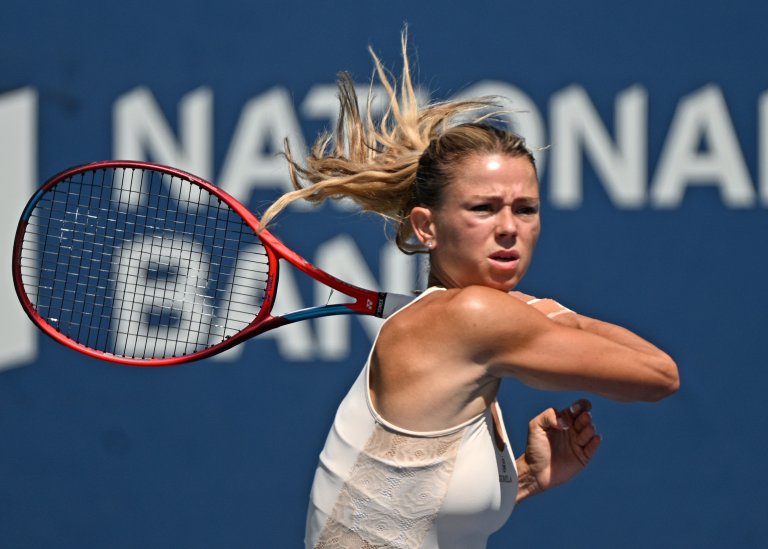 The round of 16 of the National Bank Open begins August 11th
Five matches are on the slate for women’s singles play
Take a look below for match odds, select previews and best bet analysis

The National Bank Open has been going on for a couple of days now, and the round of 16 will begin on Thursday, August 11th. Five matches will be played for women’s singles, with the rest following on Friday.

Tournament favorite and World No. 1 Iga Swiatek will be headlining the day, as she takes on Beatriz Haddad Maia.

Odds as of August 10th at DraftKings.

The round of 16 will continue on Friday with the remaining matches.

Former World No. 2 Sabalenka will take on 18-year old Gauff on Thursday. The two are set to play at 11 am ET in Toronto. This is not the first time these two players have gone up against one another. Gauff currently holds the head-to-head lead 2-1, with their last match coming back in 2021.

As the sixth seed, Sabalenka has only played one match. She defeated Sara Sorribes Tormo fairly easily, winning 6-4, 6-3. Sabalenka was able to convert six of 11 breakpoints, and saved 12 herself to help her win. Her biggest struggle of the day was her serve. The Belarusian has been having issues with it as of late, and it looked to continue as she recorded 16 double faults during the match.

This is another match that could really go either way. Look for the two to go to three sets to decide a winner.

This matchup dates back to 2011, when Pegula and Giorgi went head-to-head for the first time. The two have faced each other a total of seven times, and Pegula does hold the head-to-head lead with a 5-2 record. The two have played each other a handful of times in recent year though. Twice last year, where they split 1-1, and now this will be the second time this year.

Earlier this year Pegula defeated Giorgi in three sets in the round of 64 in Madrid. Giorgi will look to avenge that loss, and continue her run to defend her 2021 title.

Camila Giorgi continues her quest to become the first back-to-back champion in two decades with a 6-3, 7-5 win against Elise Mertens. #NBO22 pic.twitter.com/RBIzhddGBq

As the seventh seed, Pegula just has the one match under her belt entering the round of 16. The 28-year old defeated fellow American Asia Muhammad 6-2, 7-5, to move on. Pegula managed to maintain control of the match from start to finish, and was rarely tested by her opponent.

Giorgi has had an exciting week already. The Italian ended teenage phenom Emma Raducanu’s run early defeating her in the first round, and breezed past Elise Mertens in straight sets earlier today.

This will be an interesting match between the two, given their history. Pegula has been more successful than not against Giorgi, but the Italian is playing some high-class tennis at the moment, and riding a lot of momentum.

Regardless of the winner, look for the match to go three sets.

This will be another exciting round of 16 match, as Riske and Putintseva have gone head-to-head quite a few times. This will be their six encounter, but the first in five years. The first match between these two dates back 10 years to 2012, with their most recent happening in 2018. For the sake of mentioning, Riske does hold the 3-2 head-to-head record, but seeing that they haven’t played each other in five years, it’s something that doesn’t hold much weight.

Riske enters the third round, coming off another three-set upset over 16th seed Jelena Ostapenko. Riske defeated Ostapenko 7(7)-6(2), 0-6, 7-5, to move onto the third round of the National Bank Open for the first time in her career in seven appearances.

Putintseva sees herself in the round of 16 after her second round opponent, Paula Badosa retired from the match at 7-5, 1-0, with an injury.

The Kazakh hasn’t had the best of luck here at the National Bank Open. Prior to this year, she had only managed to win one match is all five appearances.

Things seem to be pointing in the direction of Riske for this one. She’s been challenged more this tournament, and playing at a bit of a higher level.