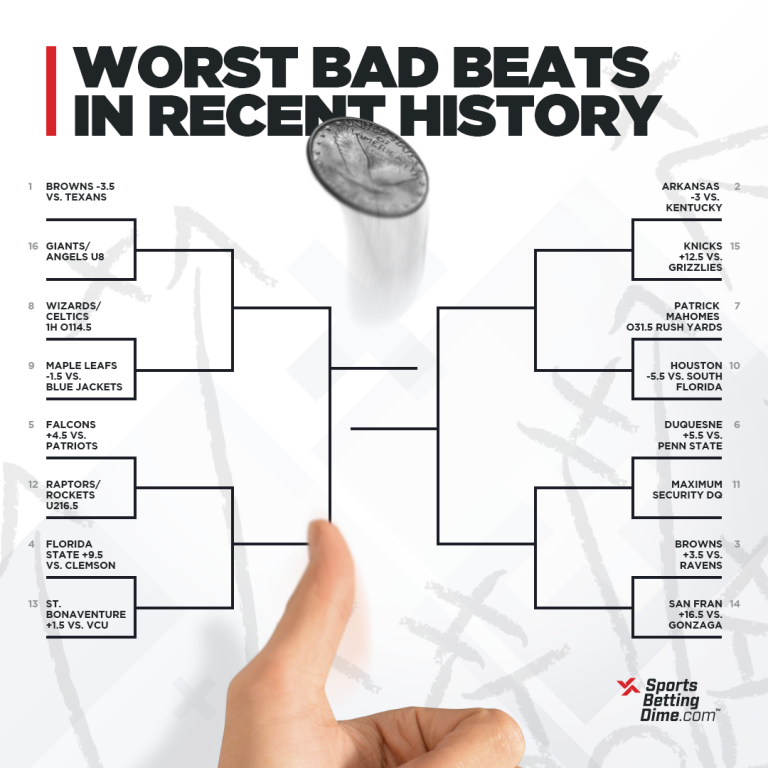 SBD is running the first-ever Bad Beats Bracket
We have gathered the worst beats of the past five years and now it’s up to you to vote on the winner (loser?)
Below, see the bad-beat contenders plus more information on how to vote

“Few players recall big pots they have won, strange as it seems, but every player can remember with remarkable accuracy the outstanding tough beats of his career” – Jack King, Confessions of a Winning Poker Player

Chances are, if you’ve been betting on sports for any length of time, you’ve lost a bet that you had already chalked up as a win. SBD’s Bad Beats Bracket is here to determine just who had it worst of all when it comes to the astoundingly bad luck that’s befallen sports bettors.

Whittling the list down to 16 was a Herculean task in and of itself, and we recognize there will be endless cries of “What about …?” But after extensive research that looked eerily like procrastination, this is the list we landed on. 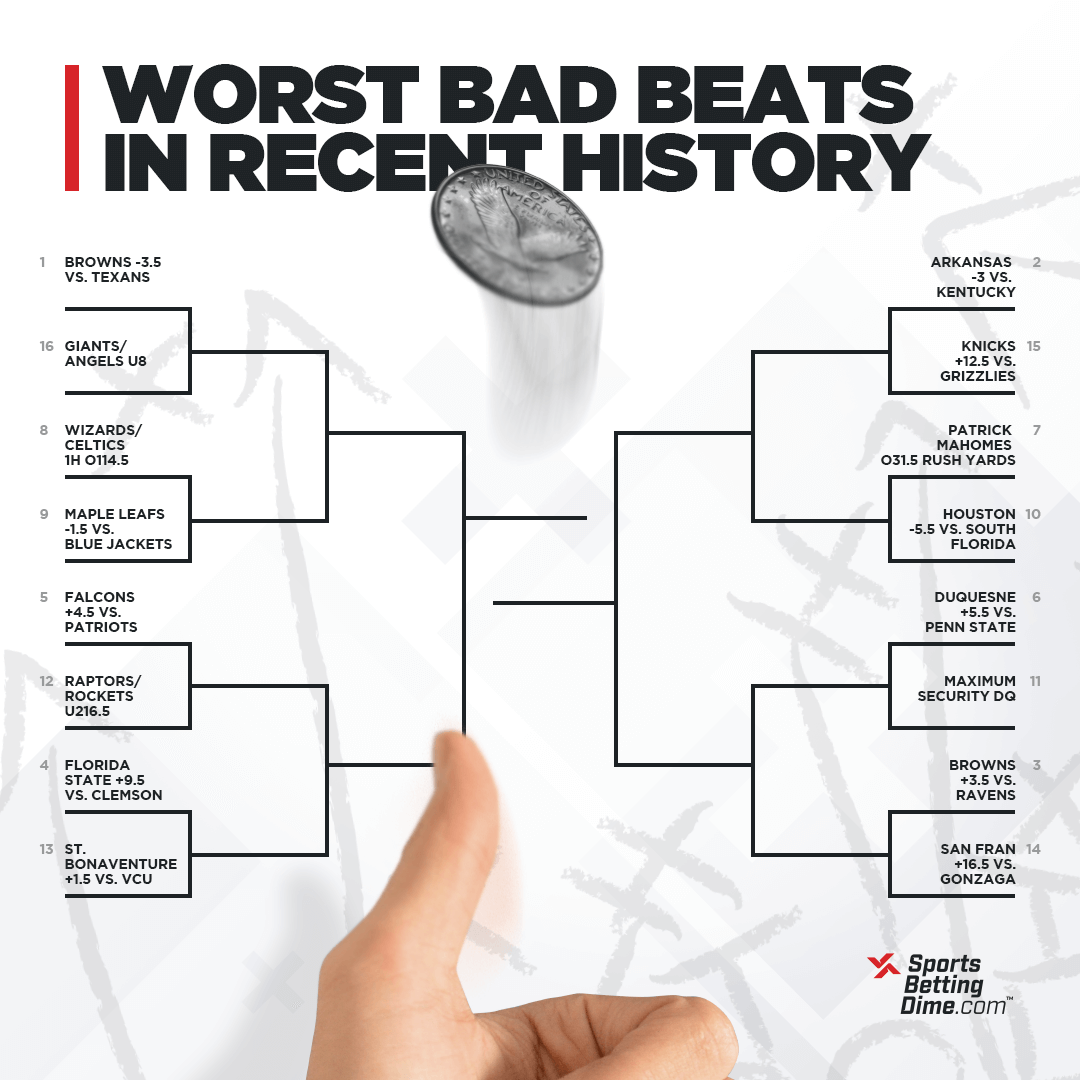 First up, we have the Browns failing to cover as 3.5-point chalk in a 2020 game versus the Texans. Up a field goal with a minute to play, Browns RB Nick Chubb could have capped off a stunning 59-yard run by strolling into the end zone. Instead, he stepped out of bounds at the one. Two knees later, the game was over.

Chubb’s selfless act is up against a ridiculous extra-innings game in Los Angeles between the Giants and Angels from June 2021. Thanks to duelling aces Shohei Ohtani and Kevin Gausman, the game was tied 1-1 after nine innings. Anyone who’d wagered on under 8.0 runs was likely a little annoyed they had to wait to get their money, but not sweating the outcome.  Improbably, the teams went through the 10th and 11th without scoring a run. (Remember, a runner is placed on second at the start of each half inning.)

After trading runs in the 12th, the 13th spelled doom for under bettors. The Giants tagged Angels relievers Adam Claudio and Junior Guerra for sevens runs total. After a meaningless run from the Halos in the bottom half, the game ended 9-3.

The #2 seed in our bracket is Arkansas bettors getting burned by a meaningless Kentucky buzzer beater in February 2022. The Razorbacks were 3.5-point favorites against the visiting Wildcats, and Hogs backers were feeling good when their team went on a late 6-0 run to take a five-point lead with just 4.4 seconds on the clock.

But then TyTy Washington went BankBank™ as time expired.

Banked 3 at the buzzer for Kentucky, Arkansas wins by 2 https://t.co/T6zJven1Xd pic.twitter.com/iDku27SmFL

The #15 seed here is truly perplexing. The Knicks were 12.5-point underdogs at Memphis. The Grizz had a ten-point lead and the ball as time was expiring.  Wade Baldwin IV appeared  to be following standard NBA protocol and dribbling out the clock. But as Knicks players started walking off the court, the rarely-used Baldwin decided this was his time to shine! Not only did he break an unwritten NBA rule by launching this 41-footer, he shattered the hearts of Knicks bettors the world over.

If everybody could say a quick prayer for me, that’d be great. pic.twitter.com/aMOHLvJg31

The #3 seed is another Cleveland Browns fiasco. The Browns, 3.5-point road underdogs at Baltimore, were down 45-42 with just two seconds to go and the ball at their own 25. After lateralling the ball for a full 30 seconds, they had lost 20-plus yards and were now perilously close to their own end zone.

Eventually, Tee Higgins was hit while attempting the seventh lateral of the play. The ball wound up out the back of the end zone … for a safety. Game over, 47-42 Ravens.

Cleveland’s opponent is the San Francisco Dons getting screwed by a garbage-time three from WCC Goliaths Gonzaga back in February 2020. Already up 14 points (68-54) with just 3.9 seconds on the clock, the Zags decided to practice an inbounds play instead of running out the clock.

Sharpshooting Corey Kispert darted to the near corner, took a feed from Admon Gilder, and buried a triple. That put the Dons, a 16.5-point underdog, down 17.

Our #4 seed is another last-second lateral play gone very wrong. In October 2021, the Florida State Seminoles headed into Death Valley as 9.5-point underdogs to Clemson. After going toe-to-toe with the ACC powerhouse for four quarters, they trailed 24-20 with four ticks on the clock and the ball at their own 33.

Nothing but a return TD could kill FSU bettors. So you know what happened.

This might be the baddest beat I’ve ever seen. Florida State was +9.5 and the over/under was 48. 😳 pic.twitter.com/VIJ4S9yhJk

With our #13 seed, the blame can, perhaps fittingly, be pinned on the some of the very fans who were screwed by the outcome. Back in February 2017, St Bonaventure’s Matt Mobley hit a three-pointer with 0.4 seconds left to give the Bonnies (who were 1.5-point home underdogs) a 66-65 lead over visiting VCU.

Bonnies fans, however, stormed the court before the game was officially over. That’s a technical foul. VCU hit the ensuing free throw and then dominated OT for an 83-77 win.

Next up is the Atlanta Falcons Super Bowl collapse in 2017. Everyone remembers the outcome on the scoreboard. Atlanta raced out to a 21-3 halftime lead, extended it to 28-3 in the third quarter, and then let it all slip away, eventually losing in OT.

What only Atlanta ATS bettors remember is that the Falcons were 4.5-point underdogs. Even when the game went to OT, basically only a New England TD on the first drive of the extra frame could kill their bets. Which is exactly what happened.

Patriots come back from being down 28-3 against the Falcons in super bowl LI pic.twitter.com/CKrj4z16bl

On the other side of this matchup is a brutal beat for under bettors in a Raptors vs Rockets game back in 2016. This was another case of one player getting overzealous when the outcome had long been decided. NBA fans will not be surprised to know that that player was Patrick Beverley.

With Houston up 113-102 in the dying seconds, Toronto guard Kyle Lowry was holding the ball, waiting for time to expire. He was literally standing still near half-court for a handful of seconds. But Beverley kept going for the steal and was called for a foul with 0.2 seconds remaining. Lowry hit both free throws to make it 113-104. The total was 216.5. You do the math.

Next up is a truly unique bad beat from 2018. A 5.5-point home underdog, Duquesne had battled Penn State to a 67-67 tie with just 5.2 seconds remaining. The Dukes were then called for a two-shot foul, which coach Keith Dambrot did not agree with.

Dambrot proceeded to argue fervently with the ref and picked up, not one, but two techs. If you’re keeping score at home, that’s now six free throws coming up for the Nittanies. Rasir Bolton hit the first four and Lamar Stevens the final two, putting PSU up six. Duquesne would turn the ball over on their final possession. PSU wins by six.

What a way to end the game.

Tied at 67 with 5 seconds remaining, technicals were handed out to Duquesne coach Keith Dambrot after a foul resulting in SIX straight FT’s for @PennStateMBB to secure the victory. pic.twitter.com/r10cvdYCUH

That Duquesne debacle is up against the strangest Kentucky Derby outcome of all time. Back in 2019, Maximum Security appeared to win the Run for the Roses as a 9-2 (+450) wager. But bettors’ elation was short-lived. After an inquiry, it was ruled that Maximum Security had illegally impeded the path of War of Will. He became the first Derby winner ever to be disqualified in the (then) 145-year history of the race.

The #7 seed is the first and only player prop to make the bracket, but boy was it gut-wrenching. The over/under for Patrick Mahomes rushing yards in Super Bowl 54 was set at 31.5 yards.

Thanks to an epic 21-point fourth quarter, KC was in a position to kneel out the clock on the final drive of the game. Mahomes had piled up 44 rushing yards in the first 59 minutes, hitting the over and then some.

Then came the kneel-downs.

Mahomes took three knees in total, and wound up losing a massive 15 yards between all three. That bumped his rushing yards down to 29.

On this day, 2 years ago Super Bowl bettors suffered an epic bad beat:

Patrick Mahomes over/under for rush yards in Super Bowl 54 was 29.5.

Coming in as the #10 seed is another garbage-time bucket from the college ranks. In February 2020, the Houston Cougars – a 5.5-point favorite – had built a six point lead at South Florida with just 3.9 seconds on the clock. USF was inbounding from under its own basket with no hope of even forcing OT. But Laquincy Rideau wasn’t hearing it.  The senior guard went coast-to-coast at top speed for a layup with 0.1 on the clock.

In the #8 slot we have a first-half over from Wizards vs Celtics in October 2021. The first-half over was set at 114.5. The score was 62-52 (114) with under 10 seconds to play, but a Boston turnover sent the Wizards on a 2-0 break the other way. Kentavious Caldwell-Pope fed Bradley Beal directly under the basket.

Finally, we have our lone hockey entry in the bracket. The Leafs were -1.5 on the puckline against the visiting Columbus Blue Jackets in a December 2021 game in Toronto. The Leafs took a 5-1 lead into the third period and were up 5-2 with fewer than four minutes to play. Even after Sean Kuraly made it 5-3 with 3:35 on the clock, bettors who had Leafs -1.5 still had to be feeling pretty good.

But with just 0.6 seconds remaining, Max Domi took a slick doorstep feed from Jakub Voracek and trimmed the lead to one.