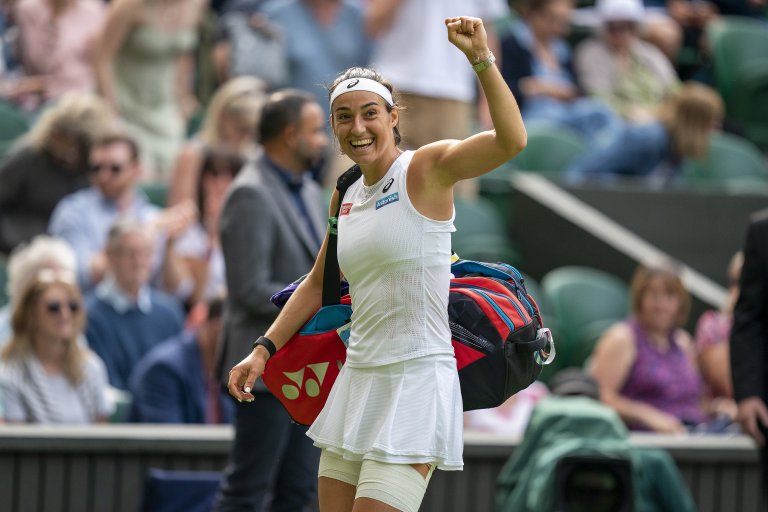 Only one top-10 remains in the entire bottom half of the Wimbledon women’s singles draw
No,. 3 seed Ons Jabeur therefore has to be considered the strong favorite to survive out of this half
Read on to see who else might give her some competition, and where the potential upsets are

No. 2 seed Anett Kontaveit, No. 5 Maria Sakkari and No. 7 Danielle Collins are long gone from the bottom half of the Wimbledon women’s singles draw.

So that leaves No. 3 seed Ons Jabeur as the big favorite to get to the final out of this half.

Wimbledon Women’s Round of 16 Odds

Odds as of July 2at Caesars Sportsbook

Except … that pesky Jelena Ostapenko – the only remaining player in the bottom half who actually has WON a Grand Slam title, is lurking.

And given the level she’s capable of on any given day, it would be dangerous to write her off.

Iga Swiatek, the world No. 1 and the owner of a 37-match winning streak that dates back to February, was upset in straight sets by veteran Alizé Cornet in the third round Saturday, in the top half.

Swiatek was the overwhelming pre-tournament favorite; now, Jabeur takes her place at the top of the Wimbledon odds list, after being second in line before the tournament began.

At 34, and after two maternity leaves, Maria entered Wimbledon on a protected ranking and has shocked her way to the second week with upsets over No. 26 seed Sorana Cirstea and, on Friday, No. 5 seed Maria Sakkari.

Her varied, clever game and top-class slice backhand should work very well on the grass. But Maria had only made it past the second round at the All-England Club once before – and that was all the way in 2015,

“I like to come back to tennis after having kids, I guess.”

More on the mother of two: https://t.co/FQHFpbMfLm#Wimbledon

Against Sakkari, whose results really have been up and down this year, she had all the questions, and Sakkari had no answers without much power to work with.

But in that context where the underdog’s tournament is already made, she will run up against a brick wall in Ostapenko, who can smell an opportunity a mile away.

This is a danger match for Jabeur, who comes up against the next-highest ranked player after Ostapenko in a match she should win.

But Mertens has been among the most consistent performers in the majors over the last few years (damning with faint praise, in a sense, because “consistent” in this context means making the third round).

The two have met once – and it was also at a major. Mertens defeated Jabeur in straight sets in the third round of last year’s US Open.

Mertens’s straight-sets upset win over No. 15 seed (and former Wimbledon champion) Angelique Kerber was a shocker given she struggled to get through her first two rounds against opponents with far thinner resumés.

Her best results have come at the Australian Open. But beyond some second-week breakthroughs she has typically been a player seeded in the 20s, who loses in the third round as she’s expected to do.

Jabeur should get through, but not without some anxious moments. She often hasn’t reacted well to being the favorite; it’s still uncharted territory for her.

Niemeier is a 22-year-old who made her Grand Slam main-draw debut just last month at the French Open.

Watson is a 30-year-old veteran, oft-overlooked but very solid, who is playing her 12th straight Wimbledon (whether through home-country wild cards, or on her own ranking).

She has made two runs: to the third round both in 2012 and 2017. And after all that effort and a couple of lean years, she’s into the second week for the very first time.

Only her nerves can stop her from making the quarterfinals; her superior athleticism and grass-court experience should be too much against the neophyte Niemeier.

Still, it is not going to be a cakewalk.