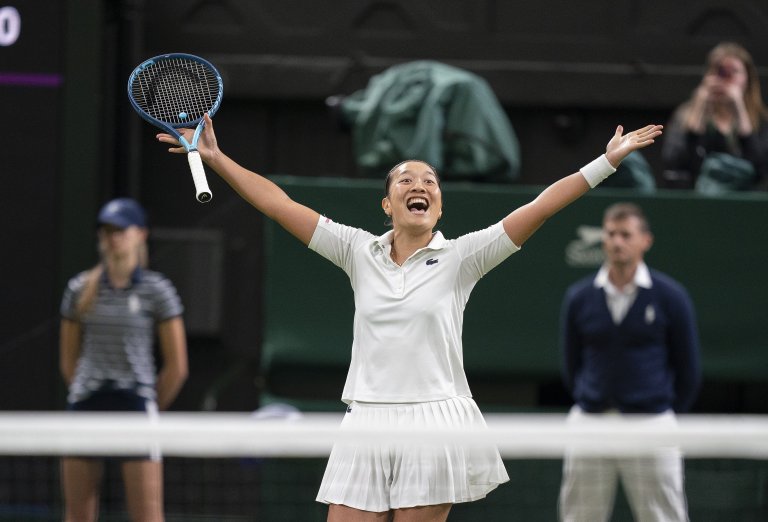 The July 4 round of 16 matches feature former Wimbledon champ Simona Halep – and the rest
Can Harmony Tan, the unseeded Frenchwoman who toppled Serena Williams in the first round, advance?
Scroll down as we try to make sense out of this most unpredictable Wimbledon

Someone is going to win the Wimbledon ladies’ singles title this year.

It’s just not going to be someone most expected.

Wimbledon Women’s Round of 16 Odds

Odds as of July 3 at Barstool Sportsbook

Iga Swiatek was the overwhelming pre-tournament favorite. But she’s out; Jabeur takes her place at the top of the Wimbledon odds list, after being second in line before the tournament began.

That she’s well ahead of Simona Halep, the 2019 champion, is somewhat surprising.

Most players who have a moment like unseeded Harmony Tan had on No. 1 Court, as she toppled returning queen Serena Williams a week ago, don’t necessarily follow it up.

But Tan – who would have had to go through qualifying had there been a full field including the Russians and Belarussians, has made good.

The draw gave her the opportunity, and she took it. Her funky game got her past Sara Sorribes Tormo, the No. 32 seed who usually is the one who slices up opponents. And then she ran into British wild card Katie Boulter, who ran out of emotional energy after a great run that included an upset over 2021 finalist Karolina Pliskova.

So, good for her. But Anisimova got through a tough one against countrywoman Coco Gauff, ranked higher and in better form, to get here. She has more experience in the later stages of Grand Slams and also an ability to build upon an expected win. If she can keep her emotions in check; so often she just looks despondent out there.

Tan is playing with house money (literally; she’s already earned $190,000, almost a quarter of her entire career earnings so far).

It is an unexpected pleasure for both veteran players to find themselves in the second week of Wimbledon.

Cornet, 32, plans to likely call it a day at next year’s French Open. This is her 62nd consecutive Grand Slam played, and she’s made the second week at all of them. But she’s only made one other quarterfinal – in January at the Australian Open.

Causing an upset on No.1 Court 🤝 @alizecornet

Tomljanovic, 29, also has only made one other quarterfinal; it came a year ago at Wimbledon where she defeated Cornet in the second round.

Cornet is the slight favorite in this one. Their head-to-head is 2-2, and they split their 2021 meetings with both being long three-setters.

We’re expecting another three-setter Monday, and two things could happen. Either Cornet will just run out of gas from playing three events – and beating the world No. 1 in the previous round.

Or Tomljanovic will put herself in a position to win – only to fail to close it out. She has done this enough times in big matches before that it’s not out of the question.

Halep won Wimbledon the last time she played it, which was pre-COVID back in 2019.

She pulled out late from the 2021 event.

As the only remaining player in the draw who actually has won a Grand Slam – specifically, this one – you’d have to shoot her right to the top of the favorites list.

But she’s still well behind Ons Jabeur in the odds, even with her experience and even though she’s beaten the Tunisian two of the last three times they’ve met.

She’s probably fine with that.

The two have played once – just a few months ago on clay in Madrid. Halep ceded just four games on a day the Spaniard Badosa barely showed up. But Halep will have that in the bank.

We think she’ll do it again, because Halep is looking fresh and Badosa must back up a tough, tough win over two-time champion Petra Kvitova in the third round.