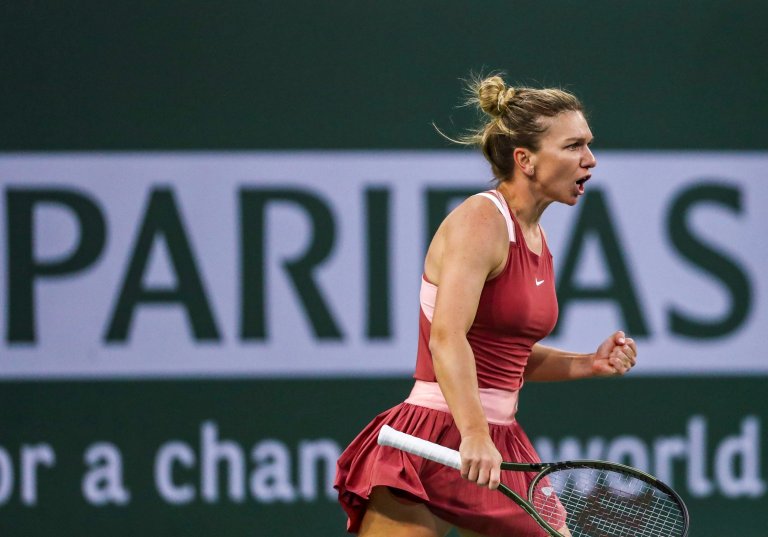 Simona Halep of Romania reacts to a point against Iga Swiatek of Poland during the WTA semifinals at the BNP Paribas Open at the Indian Wells Tennis Garden in Indian Wells, Calif., Friday, March 18, 2022.

Day 2 of Wimbledon will take place on Tuesday, June 28th
Round one will continue with 30+ matches
Continue below for odds, match previews, and best bet predictions

Round one of women’s singles play at Wimbledon continue on Day 2. With 30+ matches on the slate, it is another day full of tennis.

Tournament favorite and World No. 1 Iga Swiatek headlines the day, as she goes us against qualifier Jana Fett. With -8000 odds on the match, she is the heavy favorite to win her opening match.

Odds as of June 27th at Caesars Sportsbook.

Continue below for three match previews, and a few extra bets below.

This is the second meeting between Zheng and Stephens, with their one and only previous meeting happening earlier this year in Charleston. Zheng won that match in three sets.

Stephens definitely has the slight upper hand on this surface, as well as a bit more success of the year. The American has won 10 of 19 matches on the year, and went onto win the title in Guadalajara. But has only managed 6 win in 13 matches on grass since 2016.

But Stephens is coming off a opening round loss at Bad Homburg. She won the first set against opponent Katie Swan, but the Brit found a way to comeback.

In terms of the grass-surface, Zheng has lost two opening-round matches already. These are her only experience on grass on tour.

But the Chinese teenager will be aggressive off the jump. She enjoys using a variety of shots in her play to win points, as well as utilize her strong baseline play.

There are factors that pay into both players’ game, which could result in either of them coming out on top. Because of that, look for the match to go the distance.

This is the third meeting between Liu and Parrizas Diaz. Their first meeting came last year in 2021, with this most recent one coming in the Round of 16 of Melbourne 250 #2. Parrizas Diaz won both.

Neither player has much experience on grass, so we do have to look at their previous play for an indication of some sort.

Both players are coming off first round exits, and are still looking to have a bit of a breakthrough this year. Given the relevant match history between the two, look for Parrizas Diaz to win.

Muchova and Halep will go head-to-head for the first time on Tuesday. The two are set to take the court at 10 am ET.

Halep is the favorite entering this match, but not as strong of one as you might have imagined. The former World No.1 has had her Wimbledon Odds hover around the +1500 match since late 2021.

She has had a relatively good year so far, having won 26 of 34 matches she has played. The concern comes from his withdrawal in the semifinals of Bad Homburg, where she was slated to go up against Bianca Andreescu. The Romanian had a pretty good grass court season up until that point, but retiring from a match is not what you want ahead of Wimbledon.

Despite Halep entering the match as the favorite, it won’t be an easy win. Overall, Halep has more experience on grass with a career 42 wins in 58 matches, but Muchova has won eight of 13, and reached the quarterfinals of Wimbledon last year.

Once again, regardless of the winner here, look for it to go the distance.