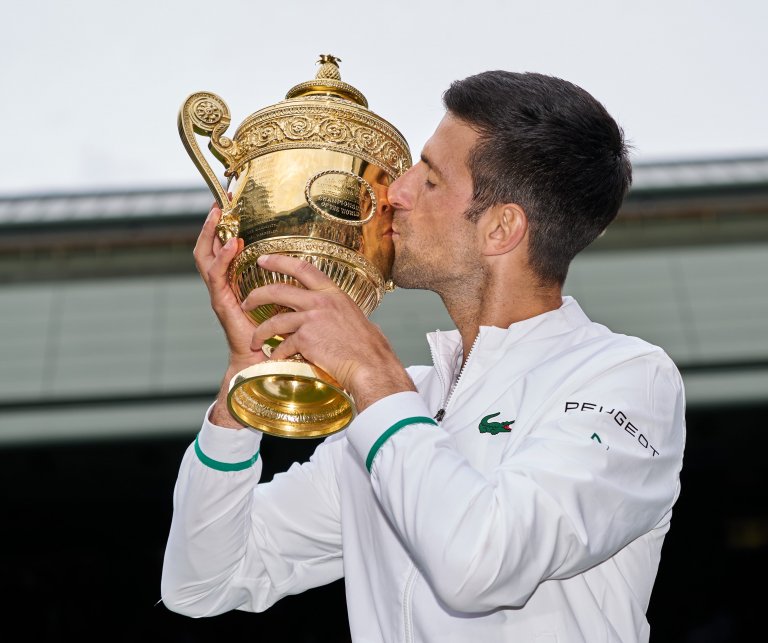 The Men’s Singles draw at Wimbledon begins on Monday, June 27th at the All-England Club
Three-time defending champ Novak Djokovic is the biggest favorite to get through his Quarter of the draw and reach the semifinals
See below for odds to win all four Quarters, plus analysis and bets to target

The Men’s Singles draw at Wimbledon is set to begin in less than 24 hours. This year’s field, however, is minus two very important names.

Eight-time champ Roger Federer will miss tennis’ most prestigious event while he recovers from knee surgery. World number one Daniil Medvedev meanwhile, has been banned from playing along with all the other Russian and Belarusian players due to the invasion of Ukraine.

Their absences have caused oddsmakers to be extremely bullish on three-time defending champ Novak Djokovic not only in the outright Wimbledon market, but in the Quarters futures as well.

All odds as of June 25th at DraftKings Sportsbook.

Djokovic is the overwhelming -120 favorite to claim victory in the Wimbledon odds, and by far the biggest favorite to win his quarter of the draw and advance to the semis.

The above odds and more can be found by using the best tennis betting apps.

The Serian boasts -360 odds to reach the final four, with the stiffest test on his side of the draw expected to come from Carlos Alcaraz. The rising Spanish star has been one of the top players on the ATP Tour this season, but he’s unproven on grass.

Djokovoic on the other hand, has won the Wimbledon crown six times and hasn’t lost at the All-England Club since 2017. No need to get cute in this quarter of the draw, lean with the man searching for his seventh career Wimbledon title.

Sticking with the chalk, the second Quarter is not the bracket to get cute in either. Hubert Hurkacz enters the biggest tennis betting event of the year in fantastic form, having just dominated at the Halle Open.

He cruised past Medvedev in the final, after beating Felix-Auger-Aliassime and Nick Kyrgios in the quarters and semis. Speaking of semis, he reached the final four at Wimbledon last year before losing to Matteo Berrettini.

In addition to his stellar recent form, Hurkacz has the luxury of headlining the weakest Quarter. The trio of Cameron Norrie, Casper Rudd and Grigor Dimitrov are expected to be his top competition, but none of the three have made it past the third round at the All-England Club since 2017. Rudd in particular has struggled at Wimbledon, losing in both of his first-round appearances in the main draw.

The third Quarter at Wimbledon might as well be labelled the group of death. Berrettini is a deserving favorite after claiming back-to-back titles on grass in Stuttgart and the Queen’s Club. He’s won 20 of his past 21 matches on grass, and was runner-up to Djokovic at this tournament last year.

Matteo Berrettini makes it back-to-back titles on the grass 👏 pic.twitter.com/7xlWO8CSa4

However, don’t sleep on Nick Kyrgios. The controversial Aussie has let his racquet to the majority of his talking lately, as he’s reached three consecutive semifinals. Last time we saw him, he lost a heartbreaking match to Hurkacz at the Halle Open, dropping the final two sets in a tiebreak.

He didn’t lose a game on his serve in that match, and is 3-0 versus fourth seed Stefanos Tsitsipas, his likely fourth round opponent. Kyrgios has the type of game to give top players fits, including Berrettini.

The fourth Quarter is where you’ll find 22-time Grand Slam champion Rafael Nadal. He’s won each of the season’s first two Majors, but no matter which of the best tennis betting apps you peruse, he’s still considered a long shot to win his third Wimbledon crown.

That’s because he’s nursing a foot injury and he’s set to face some pretty stiff competition. His Quarter is deep with talent, headlined by Auger-Aliassime. The Canadian has made the quarterfinals in three of his past four Slams, including at the All-England Club last year.

He did fall to Nadal in the fourth round at Roland Garros last month, but he took the King of Clay to a deciding fifth set. Auger-Aliassime’s game is best suited for grass, and he’s a strong value to upset Nadal should they meet again.