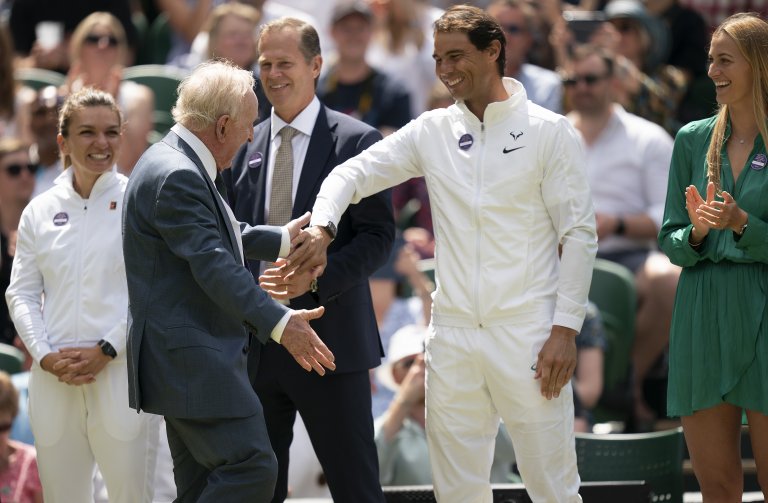 Nick Kyrgios is in the spotlight as quarterfinalists in the bottom half of the singles draw are determined
All four round of 16 matches Monday could well be determined in straight sets
Below, see Wimbledon round of 16 odds and picks plus a straight-sets parlay with a huge payout

Will Nick Kyrgios behave on Monday at Wimbledon? More crucially, will he win and get to the quarterfinals? Kyrgios heads into the round of 16 as a -335 favorite over Brandon Nakashima. The odds for Monday’s matches are listed below, followed by best bets for the day.

Wimbledon Men’s Round of 16 Odds

Odds as of July 3 at Barstool Sportsbook.

Nick Kyrgios’s odds to win Wimbledon were +1800 before the tournament began.

He’s now the +700 third-favorite, and -162 to win his quarter. When you consider the other options are Alex de Minaur, Cristian Garin and his Monday opponent, Brandon Nakashima, that seems about right.

You’d expect his semifinal opponent, if he makes good, to be Rafael Nadal, which would be a blockbuster.

The only person who is likely to beat Kyrgios in this matchup is Kyrgios himself.

His third-round match against Stefanos Tsitsipas was … contentious, to say the least. But Nakashima is so stone-faced and mild-mannered on court he definitely won’t produce any grist for the Kyrgios mill.

Kyrgios on Tsitsipas: “He’s got some serious issues. I’m good in the locker room, I’ve got many friends…he’s not liked. Let’s just put that there.” pic.twitter.com/L7ufKLHZxY

Will that help him, or hurt him? Well, it will probably help him; he could use a breather from the drama before the potentially huge second-week matches to come.

It’s also in his interest, since his body can break down, to get it done in three sets.

Whatever you think about him, he’s serious about winning this Wimbledon.

FanDuel Sportsbook Promo Code: Get the Best Bonus for Phillies vs Cardinals on Sunday Night Baseball

Kubler, a qualifier, has already had the Grand Slam tournament of his life as he took advantage of a great draw.

He beat No. 28 seed Dan Evans in straight sets. Then he met two fellow qualifiers: Dennis Novak (won in four) and then Jack Sock. Sock is a former top 10 player and two-time Wimbledon doubles champion. So not your typical qualifier.

But the American has been out of action a lot in recent years. And the toll of a run to the Ilkley final, then getting through qualifying, then the singles, doubles and mixed at Wimbledon meant that he just ran out of steam in Kubler’s five-set win.

This save by Taylor Fritz 😱😱😱

Meanwhile, Fritz has gone through the draw quietly, without dropping a set in three matches. And only two of those sets even went to tiebreaks.

He’s not the most graceful mover or the most accomplished volleyer. But he thumps the serve and the groundies and is a threat to anyone on the day.

Fritz must be looking at the draw and thinking this is a serious opportunity for a deep run, even though he’ll likely have to take his chances against Nadal in the quarterfinals.

Garin, known more for his work on the red clay of his native Chile, wasn’t expected to be in the second week, especially as he was drawn to play 2021 finalist Matteo Berrettini in the first round.

But Berrettini was a late scratch because of COVID.  And then the Chilean had a pretty sweet draw – two lucky losers in a row to start. After that, he drew No. 28 seed Jenson Brooksby, who is a grass neophyte and did a great job just getting to the third round. Garin has dropped just one set.

De Minaur, seeded No. 19, might have quietly made his way to the second week, except for the the fact that he played Brits in the second and third rounds.

“Before we talk about my match, can we just talk about Katie Boulter today?”

Alex de Minaur with arguably his best winner of the night to open the on-court interview, bumping up his boyfriend/honorary Brit stock nicely. pic.twitter.com/H21zYrextO

So that gave him pretty big court assignments. And even though he dashed the home hopes – twice – he’s a fairly popular fellow around the All-England Club.

This is a sweet opportunity for him to make the quarterfinals. And his movement around the court is his big edge over Garin. The Chilean also doesn’t have a big serve, so that will allow de Minaur to get into the rallies and take control.

De Minaur is 3-0 against Garin. And that includes a 6-3, 6-3 victory just two weeks ago at Eastbourne, on grass.

This should be another fairly routine win.

If you want an interesting tennis parlay, take de Minaur, Fritz and Kyrgios all to win in straight sets; that will give you odds of +1109.