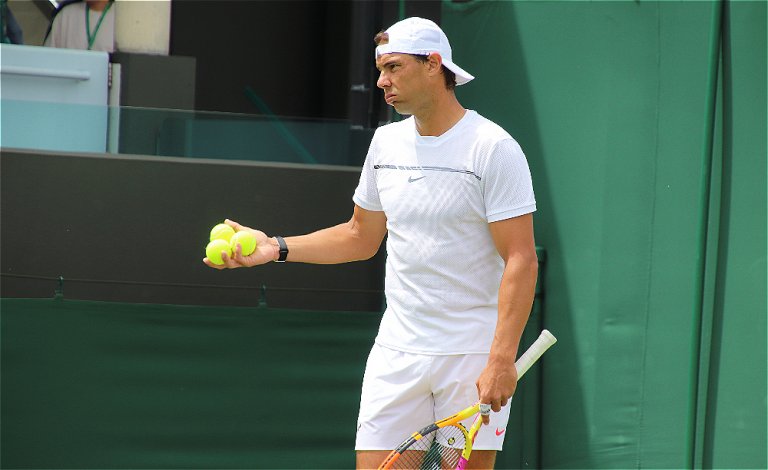 Rafael Nadal practices at the All-England Lawn Tennis Club on Saturday, June 25, in preparation for his first-round match Tuesday at Wimbledon (Photo by Stephanie Myles/Open Court)

With some holdovers from Monday, the first round of Wimbledon men’s singles still might not finish Tuesday
Rafael Nadal and Stefanos Tsitsipas are strong favorites to win their openers
With more than 30 matches on the schedule, we pick out a few that might produce good value.

No. 1 seed Novak Djokovic got through a tricky first-round test against Soonwoo Kwon of Korea. Tuesday, it’s No. 2 seed Rafael Nadal’s turn to do the same, against Argentine clay-courter Francisco Cerundolo on Wimbledon Day 2.

Odds as of June 27 at Caesars Sportsbook

Not much has changed on the pre-tournament favorites list after the first day. Except that Hubert Hurkacz, the No. 7 seed and fifth on the list of Wimbledon odds favorites on the best tennis betting apps, is already out.

On paper, No. 6 seed Félix Auger-Aliassime should have a fairly routine first round against American Maxime Cressy.

But Cressy is an old-school, throwback grass player who serves and volleys. All the time.

That type of opponent is rare, and Auger-Aliassime will have to be prepared to hit a ton of backhand passing shots to get through the American (who is at a career-high ranking of No. 45 after making the final in Eastbourne last Saturday).

As for Shapovalov, he has lost his last six matches – three of them at grass-court events – since upsetting Nadal in Rome, on clay last month. And first-round opponent Arthur Rinderknech defeated him earlier this year on hard courts on Doha.

Both Canadians had great Wimbledons last year – Shapovalov made the semifinals, Auger-Aliassime the quarterfinals – and will be unable to defend those points as none are awarded this year.

But it still feels as though both are going to have good tournaments.

And it starts Tuesday.

Despite Rune being the seeded player, Giron is the slight favorite in this one.

Still, Giron is 7-5 on grass over the last year. And he’s posted some good wins – especially in Halle.

Rune is making his Wimbledon debut and if he’s been built up as a “big-occasion player”, he lost both his grass openers in warmup events the last few weeks.

Both Zapata Miralles (the No. 1 seed) and Sock came out of the qualifying.

But there the resemblance ends.

Sock, a former top-10 player a bit down on his luck, is a two-time Wimbledon doubles champion. He has never done great in singles there (to be fair, he lost twice to Milos Raonic during the Canadian star’s peak years). But he’s miles ahead of Zapata Miralles in terms of grass experience.

Zapata Miralles appeared at Wimbledon for the first time last year, at age 24. He qualified. And then he lost in five sets to fellow clay-courter Christian Garin in the first round.

There’s no quit in him, but he’ll be outmatched.