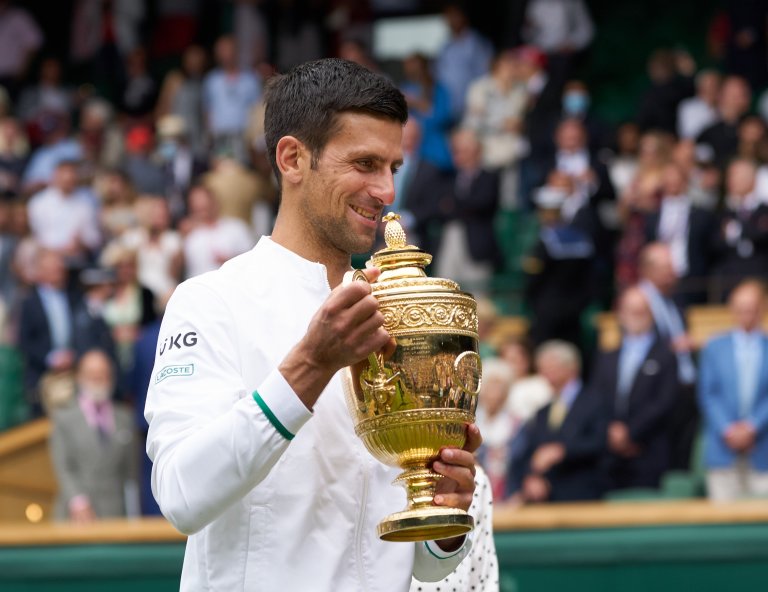 Novak Djokovic has been the favorite to win Wimbledon 2022 almost since 2021 was Wimble-done
The absence of several Russians at the top of the game likely won’t change the outcome much.
Defending finalist Matteo Berrettini is next; we break down the odds and find some good long shots

Novak Djokovic has always been the heavy favorite to win this year’s Wimbledon.

He’s the only one in the negative, and that number hasn’t changed a lot in the last six months. as reflected in the Wimbledon odds.

What has changed some is that Rafael Nadal has joined the party.

Odds as of June 25 at Barstool Sportsbook

The above odds and more can be found by using the best tennis betting apps.

You wouldn’t have given 2021 finalist Matteo Berrettini much of a shot a month ago, after hand surgery and with so little tennis.

He’s also in a friendly quarter where the highest seed is Stefanos Tsitsipas, who has yet to have his grass breakthrough.

Watch Out for Nadal

The way Rafael Nadal limped out of Paris – even if he limped out with the trophy– you wouldn’t have given much for his chances at Wimbledon.

He’s won it before, but “only” twice.

But with his No. 2 seeding he’s in the opposite half to Djokovic, and that’s a plus.

Solid grass performers Marin Cilic (the 2017 finalist) and Félix Auger-Aliassime stand in the way of a semifinal between himself and Berrettini.

But that outcome would no longer be surprising as Nadal pronounced the procedure he had on his chronically painful foot after the French Open to be a rousing success.

Despite being the favorite, Jannik Sinner comes into Wimbledon with zero grass court matches, as he had to tend to the knee injury that forced him to retire in his fourth-round match at the French Open.

Sinner also has yet to win a match at Wimbledon. Ever.

Wawrinka is 37, and coming back from a pair of knee surgeries. But at least he played a few matches on grass this spring.

And even though it was awhile ago, he made the Wimbledon quarterfinals in both 2014 and 2015.

He’s 2-0 against Sinner on faster surfaces (not grass), although those results came three years ago when Sinner was just turning 18.

If you’re looking for a tasty tennis prop this Wimbledon, tiebreak props are always more prevalent. Take over 1.5 tiebreaks on this one at +210.

Ruud, despite being the No. 3 seed, is even less experienced on grass than Sinner. And, it has to be said, even more hapless.

The Norwegian, who made the French Open final on clay earlier this month, played one official match on grass and lost to a British wild card at Queen’s Club.

Ramos-Viñolas, 34, is also a clay-courter and has lost in Wimbledon’s first round 6-of-8 times overall. Still, he knows how to play on it and has made the third round on two occasions.

Can you bet on both to lose? No, but it’s an upset in the making with Ramos-Viñolas the underdog at +400 to win outright.