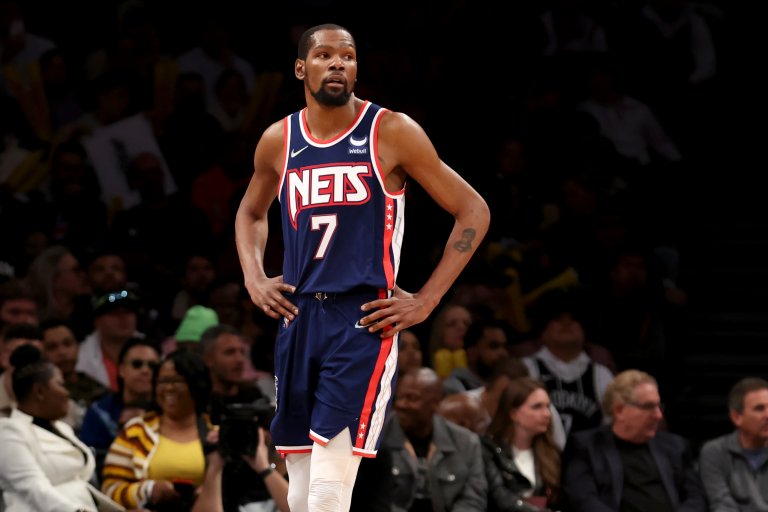 No more than three weeks ago, and it looked like the Brooklyn Nets were on the verge of a complete collapse. They got swept out of the first round of the 2021-22 NBA Playoffs by the Boston Celtics, both Kyrie Irving and Kevin Durant wanted to be traded, and Ben Simmons had yet to play a single second in a Nets uniform. Across the board, the NBA betting odds were painting the picture of the Nets needing a rebuild of sorts in the very near future.

However, fast forward to July 20, and things have progressively quieted down in Brooklyn. Irving and Durant are both still on the roster, and their top potential trade partners are seemingly exploring other options. Now, the Nets at +1500 to win the NBA Finals is starting to look like a decent value bet.

Odds as of July 20, courtesy of DraftKings. Claim this DraftKings Sportsbook promo code before betting.

No matter how you slice it, whatever team Kevin Durant plays for this season is going to have a good shot at winning the NBA Finals. Despite the Nets’ postseason struggles last year, Durant is still one of the most lethal scorers in the league. His ability to score at all three levels will always have his team getting favorable NBA Championship odds.

A Durant trade felt likely a few weeks ago. However, according to ESPN insider Brian Windhorst, talks have stalled as of late. The Nets are no longer calling teams about taking on KD.

Trade talks around Kevin Durant have ‘slowed to a trickle,’ per @WindhorstESPN

The Nets ‘are not aggressively’ reaching out to teams pic.twitter.com/NkYbvKxDsF

The Phoenix Suns were seen as the most likely landing spot for Durant, but they just attached themselves to Deandre Ayton by way of a max contract, complicating a potential trade.

Regardless of what happens with Irving, Durant remaining in Brooklyn next season makes them a serious threat to come out of the Eastern Conference. He’s always going to be an NBA MVP odds betting favorite.

Similar to Durant, trade talks around Kyrie Irving are starting to lose steam.

The Los Angeles Lakers were always viewed as the most likely landing spot. However, recent reports seem to suggest LA would be willing to pivot in a different direction if the Nets refuse to take Russell Westbrook in return.

One or two reports have also emerged stating Irving’s willingness to remain in Brooklyn alongside KD, potentially revealing his acceptance that a trade to Los Angeles is no longer likely.

Check out my latest in an all new edition of Scoop B Intel Presented by @BallySports.

Amidst all the drama and noise in Brooklyn is former No. 1 overall pick Ben Simmons. The main returning piece in last year’s James Harden trade, the world has yet to see what Simmons looks like playing alongside Irving and Durant.

Of course, Simmons has a long list of limitations. He refuses to shoot the ball, he struggles at the free throw line, he hasn’t played NBA basketball in a full year, and he seems to get easily upset and disinterested. However, Simmons is still a multi-time All-Star who excels on defense and passing the ball.

If Durant and Irving stay, and Simmons clicks playing alongside them, that could genuinely be the best ‘Big Three” in the NBA.

There’s still a lot to figure out when it comes to the Nets this offseason. However, grabbing them at +1500 — the ninth best odds in the NBA — to win it all at least deserves a second glance.