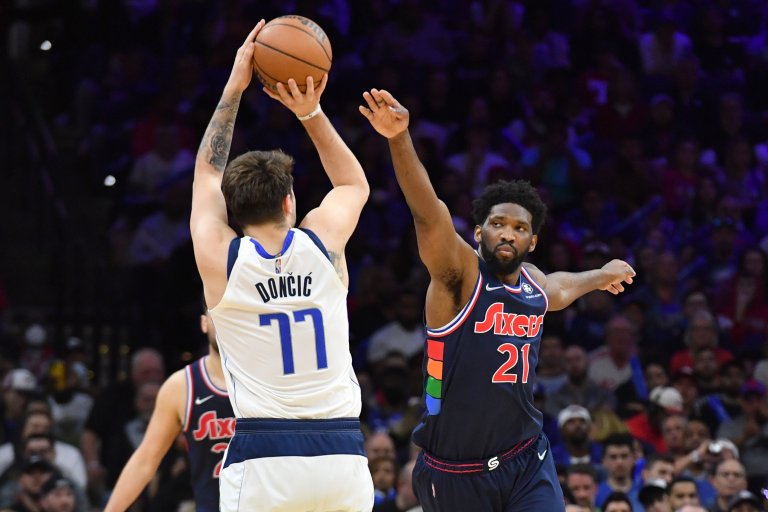 2022-23 NBA MVP odds have Luka Doncic in the lead at +460
Doncic is slightly ahead of fellow stars Joel Embiid and Giannis Antetokounmpo
Below, find out why Doncic is viewed as the top betting favorite

With most of the major NBA offseason moves out of the way, a clearer picture of what the 2022-23 NBA MVP picture will look like is starting to emerge. Of course, there’s still potential for a blockbuster Kyrie Irving and/or Kevin Durant trade to go down, which would massively alter the landscape of the league. However, for the most part, the NBA MVP odds are starting to solidify.

Why Luka Doncic Is the Betting Favorite

Luka Doncic has yet to win an NBA MVP. In fact, he hasn’t really been in the conversation for the award since debuting in 2018.

It’s largely been a three-man battle between Antetokounmpo, Nikola Jokic, and Embiid the past four years. Giannis secured back-to-back MVPs in 2019 and 2020, while Jokic has won the award the past two seasons. If anything, Embiid is the one who’s been progressively getting closer and closer each year. Many thought he was the deserving winner this past season.

With all of that said, it became increasingly clear during the Mavericks’ most recent playoff run that Doncic is ready to take that next step. He averaged 31.7 points per game and brought Dallas all the way to the Western Conference Finals.

To make matters even more interesting in Dallas, Doncic’s primary running mate this past season — Jalen Brunson — left for the New York Knicks in free agency. Doncic’s already high usage rate should only go up during the 2022-23 season.

Brunson is currently +1800 to win NBA Most Improved Player of the Year following his move to New York.

Luka Doncic is HIM

He finishes the first half with 27 points ?

It can be a frustrating reality at times, but the NBA undoubtedly plays favorites when it comes to awards like MVP. Jokic was the media darling the past two seasons due to his strong advanced numbers, blowing away his competition in the voting process when it really should have been a lot closer.

This favoritism helps someone like Doncic, as many view him as a potential “next face” of the NBA. However, it hurts someone like Joel Embiid.

Embiid continues to get better and better, both offensively and defensively. He led the league with 30.6 points per game last season — a statistic that probably should have won him MVP considering how hard it is for big men to succeed offensively these days.

However, when the voting results came out, it was clear Embiid was never really considered for the top spot over Jokic. It’s not fair to Embiid in the slightest, but it’s beginning to feel like there’s nothing he can do to win the league MVP moving forward, making him at +550 an unattractive betting option.

What a night for Ja Morant!

It feels likely Doncic secures his first career MVP this season. However, there’s still some good value to be had further down the board.

Durant could find himself on a new-and-improved team as soon as tomorrow, which would cause his MVP odds to skyrocket. Ja Morant — similar to Doncic — is beloved by the media, and LeBron James is always going to be in that conversation, regardless of the Los Angeles Lakers’ NBA Championship odds.