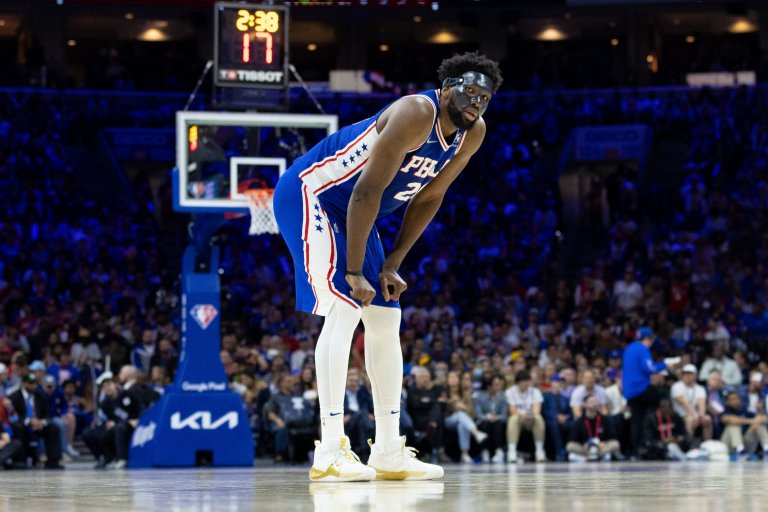 May 12, 2022; Philadelphia, Pennsylvania, USA; Philadelphia 76ers center Joel Embiid (21) looks on during the third quarter against the Miami Heat in game six of the second round of the 2022 NBA playoffs at Wells Fargo Center. Mandatory Credit: Bill Streicher-USA TODAY Sports

Joel Embiid is second to only Luka Doncic in the latest NBA MVP odds
Embiid has finished as runner-up in MVP voting in each of the last two seasons
Is there value backing the Cameroonian at +550?

After placing second to Nikola Jokic in 2020-21 and 2021-22, Joel Embiid is second favorite in the preseason NBA betting MVP odds at FanDuel. Embiid is priced at +550 behind Luka Doncic (+450) and just ahead of two-time MVP Giannis Antetokounmpo (+650).

Jokic is out at +1000 to defend his crown, with an expectation that voters will resist handing the Serbian a three-peat. Despite his offseason trade request, Kevin Durant is as short as +1200, just in front of his former teammate Steph Curry.

Odds as of Jul 29 at FanDuel. Claim this FanDuel Sportsbook promo code before betting.

Embiid played a career-high 68 games in 2021-22. He overcame Ben Simmons-related turmoil, and became the first center to win the scoring title since Shaquille O’Neal. It still wasn’t enough to win MVP ahead of Nikola Jokic, who posted astonishing statistics in both traditional and advanced categories.

He has managed to put most of his injury woes behind him, with his recent health concerns being a result of freak contact injuries for the most part. Still, the Sixers will be careful with his workload, and he’s unlikely to get any higher than 70 games in a season.

With Simmons absent, this was also a set of unique circumstances for the former third overall pick. Embiid had to do everything for the Sixers on offense, leading to a career-high usage rate. He topped the points per game charts, played great defense and advanced numbers rated his season very highly (third in overall RAPTOR), but Embiid still fell short.

While he has continued to improve, it’s hard to see Embiid playing much better than he did in 2021-22, plus there was an element of narrative in his favor with the Simmons circus.

The 2022-23 season should be calmer, and the Sixers’ record should be better as a result. So much for Philadelphia comes down to how James Harden looks — is he the guy we saw when he first got to Brooklyn? Or are the Sixers stuck with the sluggish Harden from the 2022 playoffs?

Harden’s performances naturally impact Embiid’s MVP candidacy. They were an unstoppable pick-and-roll duo even with Harden limited as a scorer. If Harden’s conditioning is better and his hamstring is fully recovered, the Sixers may well be a top two team in the Eastern Conference, which might nudge Embiid from runner-up to winner.

Alternatively, while improving the Sixers’ NBA Championship odds, Harden being somewhere near his best could hamper Embiid’s MVP chances, just as a lack of help in 2021-22 aided the argument for both Jokic and Embiid.

Daryl Morey has constructed a roster of well-fitting pieces around his two stars. It makes the Sixers an intriguing prospect in NBA odds and could allow Embiid to put up even bigger numbers. Even so, there is a narrow window of Harden’s performance that can enhance Embiid’s award opportunities. If he’s too good, there will be less of a spotlight on Embiid. If he performs as he did last season, the Sixers will win fewer games, which will be used as a reason not to vote for Embiid.

Injuries, the wide range of outcomes with Harden, and the strength of the field make Embiid a bad bet at this price. Some voters might want to back Embiid after how close he’s got in each of the last two seasons, but that’s not enough to make him a good wager in NBA MVP odds at +550. It becomes a more appealing option if he drifts towards +800.

There are a lot of interesting longshot candidates at the moment from Anthony Edwards (+12000) to Zion Williamson (+6500) and Jayson Tatum (+1400). The best bet of the lot, though, is Antetokounmpo.

The Greek Freak has suffered from a bit of voter fatigue, but he’s once again coming off a historic playoff performance and is all but guaranteed of being on one of the five best teams in the Association in the regular season.

If anything, Antetokounmpo has improved since his last MVP. He’s arguably the best defender in the league, and despite not really being in the MVP conversation, he was third in WAR and second in overall RAPTOR last season after finishing second in scoring, sixth in rebounding and third in usage rate. He’s superb value at +650.