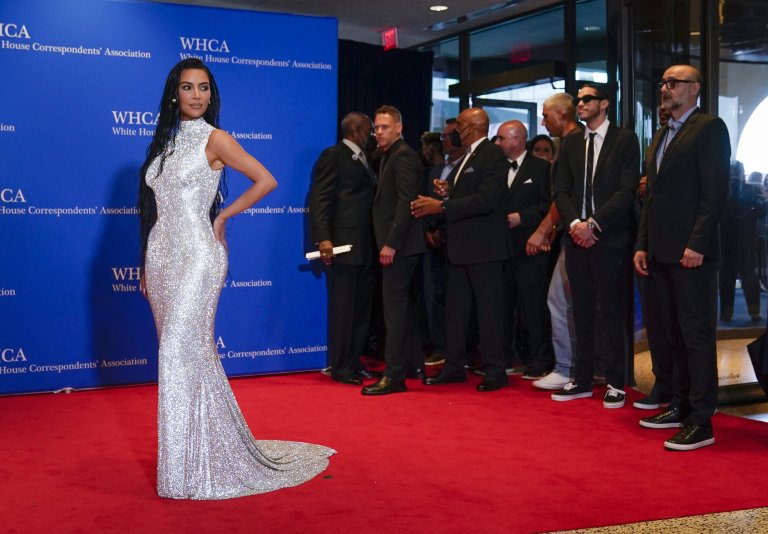 Apr 30, 2022; Washington, DC, USA; Kim Kardashian poses on the red carpet as Pete Davidson looks on from the wings as they arrive at the White House Correspondents’ Association annual dinner at the Washington Hilton. Mandatory Credit: Jack Gruber-USA TODAY

Kim Kardashian and Pete Davidson split after less than a year
The world watches closely to see who Kardashian pairs up with next
Odds have been released for Kim’s next boyfriend, with Van Jones being the favorite

The Kardashians always seem to give us something to keep up with, especially Kim. The former Mrs. West has moved on from her most recent beau, comedian Pete Davidson.

The pair cite schedules and long distance as the primary issue. However, other sources say Kardashian thought the two were getting too serious too soon. According to sources, Davidson got Kardashian’s initials tattooed on his body.

Despite the split, the pair are still delivering headlines. While there is speculation about who Davidson’s next girlfriend will be, the real question is who will newly single Kardashian snuggle up with next.

Odds for Kim Kardashian’s Next Boyfriend

CNN political commentator, Van Jones, tops the list for Kardashian’s next romantic quest. Jones and Kardashian originally connected back in 2018 at the Criminal Justice Reform Summit. While Jones continues to mentor the reality tv star on her legal career, the two insist their relationship is strictly platonic.

Kardashian reports Jones texted her “This rumor has gotten me so many dates and I’m so grateful, So I owe you.” The dating rumors circulated post her divorce from Kanye West. Since then, Jones and Kardashian have maintained the same storyline, even addressing the rumors together on air.

While the two continue to flatter one another publicly, it seems as though they truly are “just friends.” The internet shows very little evidence that they share any interests or time with one another unrelated to criminal justice reform.

Could Kim Rekindle With Kanye?

While this may seem like an odd bet, celebrities get divorced and get back together quite frequently. There have been over 30 celebrity couples who got divorced and then remarried, according to Women’s Health.

Since the divorce, Kanye has made it clear he wants his ex-wife back. From breaking things off with his flings to destroying a claymation figure of Davidson in his latest music video, West is declaring his desire to rekindle the romance with Kardashian.

West and Kardashian share four kids together. All Kardashian fanatics know Kim has a soft spot for her children and the notion of a two-parent household. As the two continue to co-parent, signs point to increased positive family interactions. Kardashian praised West for being the best father to their kids on Father’s Day.

Speculation of their reunion has begun to surface. Oddsmakers are intrigued by the possibility of Kim and Kanye getting back together, as they’ve set the “Gold Digger” singer at +750 to be Kim’s next boyfriend in the betting odds.

The list for the next boyfriend is rather lengthy with some candidates being laughable. While second chances seem to be common in Hollywood, it is highly unlikely Kardashian would reconnect with some of her former boyfriends. Many of them have ended in less than ideal circumstances, including Ray J, who infamously leaked their sex tape.

One interesting longshot bet is Cincinnati Bengals running back Chris Evans (+1200). The up-and-coming NFL star responded with a side eye emoji and thinking emoji when he realized he made the list of potential love interests.

While there is not much of a connection between the two, Evans’ response may trigger a little interest in Kardashian. The reality star has been known to dip her toes into the NFL pool, dating Reggie Bush and marrying Chris Humphries.

While Bengals fans would be upset about the Kardashian curse, it would not be a surprise to see Kardashian back with a pro athlete.

Sally is an avid sports and entertainment fanatic. For over two decades, she has made personal predictions on anything from NFL games to who will be the next Bachelorette. Sally has since parlayed her predictions into writing gigs for various media outlets before joining the team at SBD.

Sally is an avid sports and entertainment fanatic. For over two decades, she has made personal predictions on anything from NFL games to who will be the next Bachelorette. Sally has since parlayed her predictions into writing gigs for various media outlets before joining the team at SBD.