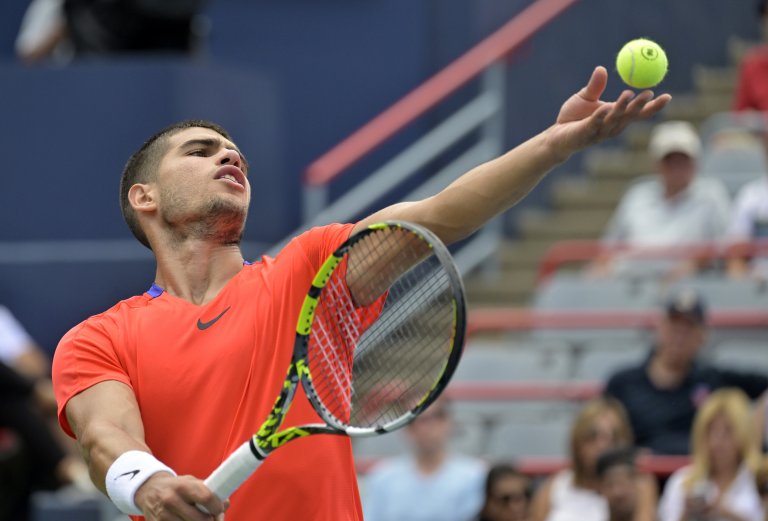 Round of 16 play at the ATP Western & Southern Open begins on Thursday, August 18th
Carlos Alcaraz is seeking his third Masters 1000 series title of the season
See below for available Round of 16 odds, plus analysis and best picks to target

We’re down to the Round of 16 at the ATP Western & Southern Open. The round of 32 produced a trio of notable upsets as number two seed Rafael Nadal, fifth seed Casper Rudd and eighth seed Hubert Hurkacz all bit the dust.

One of the favorites to survive and advance was third seed Carlos Alcaraz, who breezed through his Tuesday match versus Mackenzie McDonald 6-3, 6-2. That sets up a showdown with former US Open champ Marin Cilic on Thursday, for a spot in the quarterfinals.

Cilic has been on court twice in the past three days, defeating qualifier Jaume Munar 6-3, 6-3 in the round of 64, before a hard-fought three-set victory over Emil Ruusuvuori on Wednesday.

Alcaraz was our pick prior to round 1 to take home this week’s Cincinnati title, which would be his third Masters 1000 series triumph of the season. The 19-year-old improved to 16-3 in Masters 1000 series events this season and 13-3 on the hard court with his latest victory.

Not only did Alcaraz never face a break point, he never went to deuce on his serve either. He dispatched McDonald in just 65 minutes, winning for an ATP-high 43rd time in 2022.

First win in Cincinnati ✅@carlosalcaraz defeats Mackenzie McDonald 6-3, 6-2 to advance to the next round [email protected] | #CincyTennis pic.twitter.com/3cireaGVxn

Cilic on the other hand has shrugged off a disappointing first few months of the season putting together five quality showings. He’s reached the round of 16 in five straight starts, highlighted by a semifinal berth at Roland Garros.

The 33-year-old is one of the bigger servers in the men’s game, ranking 13th in serve rating, which sets up quite the battle with Alcaraz who ranks seventh in return rating. Cilic was good on just 50% of his first serves versus Ruusuvuori on Wednesday, and if he replicates that effort on Thursday Alcaraz will eat him up.

Alcaraz took their only career hard court meeting in straight sets this season in Miami and appears primed to silence all the critics who doubted him after last week’s collapse in Montreal. Bet him to make short work of Cilic in the round of 16.

CoolBet Ontario: Sign up With the Most Transparent Sportsbook in Canada!

Our next target is another 19-year-old in Ben Shelton. The University of Florida product edged out Lorenzo Sonego in the round of 64, then made quick work of of the fifth seed Rudd on Wednesday. Shelton dropped just eight points on serve in the entire match, winning 85 percent of his first serve points, and 78 percent of his second serve points.

He pulled off one incredible point after another versus Rudd, and capitalized on all three of his break point opportunities. The victory was his first over a top-10 player in the world, and now he looks to replicate the feat against the ninth seed Cameron Norrie.

The Brit has had a much tougher road to this point, needing three sets in both of his first two matches. Norrie snuck past Andy Murray on Wednesday after dropping the first set, and survived a hard fought battle over Holger Rune on Monday.

Cam comes through ? @cam_norrie edges 2-time #CincyTennis champ Andy Murray 3-6 6-3 6-4 to reach the round of 16. pic.twitter.com/bX7wMWJKyI

Norrie has been broken six times already through two matches, and has converted only 43 percent of his own break point opportunities. His fist serve percentage dipped below 60% against Murray, and that kind of effort will be punished by Shelton.

It remains to be seen if Shelton’s Cinderella run will continue, but he won’t go down without a fight. Expect him to push Norrie to the limit.