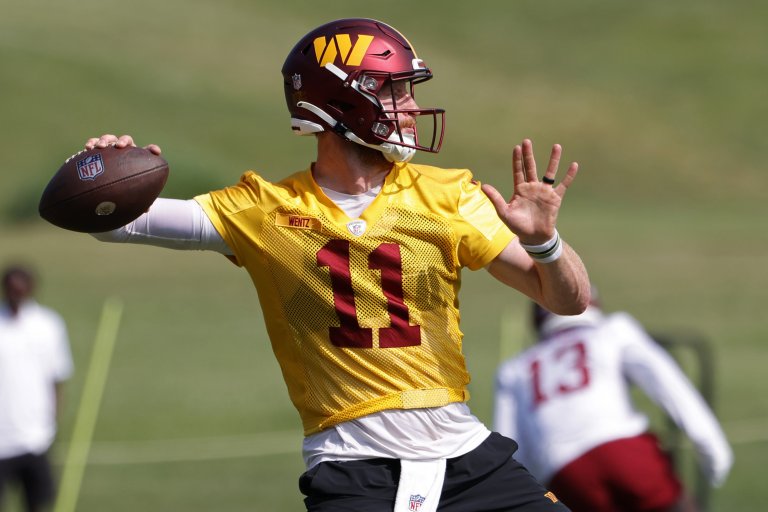 No quarterback has started in more Washington NFL season openers over the past five seasons than Carson Wentz. Oddsmakers are expecting that trend to continue.

Newly-signed by the newly-minted Washington Commanders, it’s the veteran Wentz who is pegged as the overwhelming odds-on -1100 favorite to be the team’s 2022 Game 1 starting QB. Rookie Sam Howell, the club’s 145th overall selection in the 2022 NFL Draft out of North Carolina, is given a +550 betting line of unseating Wentz for the position.

In the NFL wins totals odds, Washington is set at 7.5. Bet the over and the odds are +104. With a wager on the under  -134 odds will apply. In the NFL playoff odds, the Commanders are given a betting line of +210 to make the playoffs and -260 to miss out on postseason play.

Three times in the past five years, Washington opened the NFL season facing the Philadelphia Eagles – in 2020, 2019 and 2017. In each of those games, Wentz was the starting QB for the Eagles. He went 2-1 against Washington.

In fact, there’s been a carousel ride under center for the Commanders over the past five seasons. They’ve seen three QBs start a game in each of the past three seasons. In 2018, Washington utilized four different starting QBs.

Ryan Fitzpatrick, last year’s opening-day starter for Washington, didn’t even make it through one game. He suffered a hip injury and later underwent season-ending surgery.

Howell’s Time Is Not Now

At one time speculated to be a contender for first-round selection. Howell slid all the way to the fifth round before he heard an NFL team call his name. There is a coach out there saying that all Howell needs is a chance to show he’s got NFL ability.

It’s not unheard of for a mid-round pick to end up as an NFL starting QB. But they don’t get the nod in the opener of their rookie season.

Even the GOAT, Tom Brady, didn’t gain the starting job in New England until his second NFL season.

Commanders Will Go With The Carson Show

Last season, his first with the Indianapolis Colts, Wentz passed for 27 touchdowns against just seven interceptions. That’s less than half of the NFL-worst 15 picks he threw in his last season with the Eagles in 2019.

As well, his passing yardage totals (3,563) were Wentz’s best total in three years. His passer rating (94.6) was at its highest level in four years.

QB1 officially has his WR1??

Terry describes what stands out most about new teammate Carson Wentz ⬇️ pic.twitter.com/TC06sxTSw1

He could make an instant connection with Commanders’ wide receiver Terry McLaurin. And Wentz also fits the mold of the typical Washington starter. He’s on his third NFL team. Three of the past four opening-day starters for the Commanders – Fitzpatrick, Keenum and Smith – all played for at least three NFL teams.

If Wentz is healthy, he’s under center when the Commanders play host to the Jacksonville Jaguars on September 11. Case closed.

Kept your wallet closed as well. At odds of -1100, this isn’t a bet worth making.