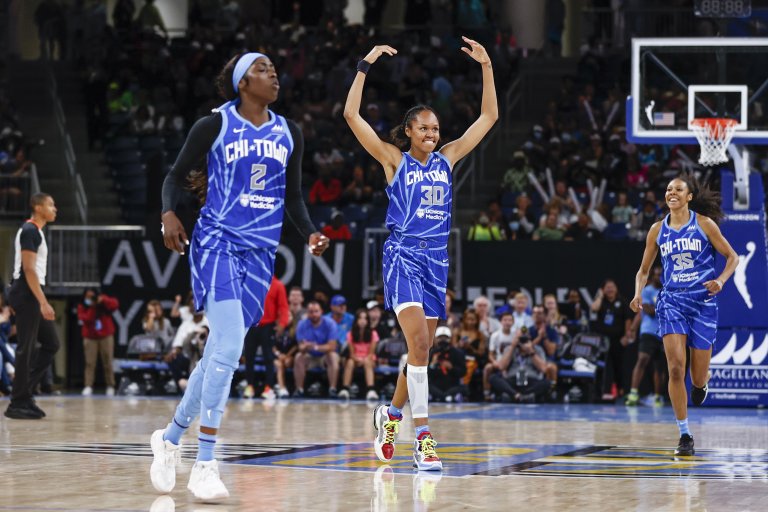 The Chicago Sky are 6-point home favorites over the Washington Mystics in a WNBA game scheduled for Friday, August 5
Chicago is 2-3 straight up over the past five games
Washington is 7-2 SU over the past nine games

Eastern Conference-leading Chicago has won just two of the past five games. Meanwhile, third-place Washington is 5-1 straight up through the past six games and 7-2 over the last nine contests.

Still, it’s the Sky who are being set by oddsmakers as 6-point home favorites in this game between these two WNBA Eastern powers. The Mystics are 3-2 SU in the past five against the Sky and 2-1 SU in the last three games played at Chicago.

Tipoff for this game is set for 8:00 pm ET on Friday, August 5 at Wintrust Arena. The game is available for viewing on NBA TV in both the USA and Canada.

At a moneyline of -110 on their 6-point spread, the Sky are given an implied probability of victory of 53.38%. Bet $10 on Chicago to cover the spread and if the Sky does indeed come through with the victory by more than five points, that will provide a payout of $19.10.

In future book betting, Chicago is the second betting choice in the WNBA championship odds. The Sky, defending WNBA champions, are given odds of +200  to win the title. The Mystics are the fifth choice in this betting market at +850.

Chicago was carrying a franchise-record 10-game home-court winning streak to the floor for their last game against the Dallas Wings. Well, they’ll be seeking to launch a new streak when facing the Mystics.

Dallas ended up downing Chicago 84-78. The Wings were able to do this despite being without Arike Ogunbowale due to an ankle injury. She’s the WNBA’s third-leading scorer, averaging 19.9 points per game. Chicago committed 16 turnovers and missed eight free throws.

Sky post a clean injury report ahead of tomorrows game against the Washington Mystics.

Small forward Kahleah Copper led the Sky with 19 points. That was two more points than Chicago all-stars Candace Parker (eight) and Courtney Vandersloot (nine) combined to score in the game. With 27 points, Copper also led Chicago in scoring in the previous game, a key road win over the Connecticut Sun.

Dallas (15-16) is fighting for a playoff spot, while Chicago is fighting with Las Vegas for the top seed in the WNBA. But the Sky might want to take a look over their shoulder. Both the Sun (22-10) and the Mystics are lurking nearby in the Eastern Conference standings.

Nothing Mystical About Washington Success

WNBA champions three years ago, the Mystics could potentially topple the league’s two best teams in successive games. In their last outing, they ended the four-game win streak of West-leading Las Vegas by dropping the Aces 83-73. That same Las Vegas club recently won by 10 points on the road at defending champion Chicago.

Note: Elena Delle Donne will not travel to Chicago for the Sky game. Taking another rest day. #wnba #MYSTICS25

Teamwork is making the dream work for Washington. In the win over Las Vegas, the Mystics drew assists on 25 of 31 made field goals.

On the one hand, Chicago’s recent inconsistency is making it tough to bet the Sky. On the other hand, the Sky are a combined 5-1 against Connecticut (3-0) and Washington (2-1), their closest pursuers in the Eastern Conference. However, Washington is 6-3 SU over the last nine games played at Chicago.

Overall, five of Washington’s last six losses were by five points or less. However, minus Delle Donne, the Mystics will be susceptible to a setback in Chicago.