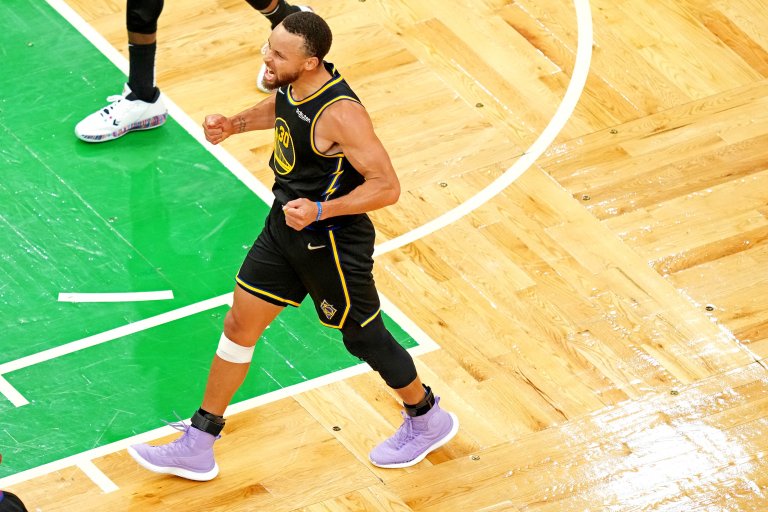 The NBA Finals return to San Francisco for Monday night’s Game 5
Off the back of a gem from Steph Curry, the Warriors evened the series on Friday
Read below for Warriors vs Celtics Game 5 player props and our best bets

This enthralling NBA Finals is back in San Francisco on Monday night for Game 5. Inspired by a 43-point outing from Steph Curry, the Golden State Warriors evened the series in Boston on Friday. The Dubs once again became favorites in NBA Championship odds as a result.

Back in front of their home crowd at Chase Center, the Warriors are unsurprisingly favored for Game 5. Steve Kerr’s team suffered their only home loss of the postseason in Game 1.

Odds as of Jun 13 at FanDuel

We couldn’t stay away from the Steph Curry props after his monster Game 4 performance. The two-time MVP put in arguably the greatest performance of his illustrious career to keep the Dubs in the series, and while even Curry is likely to cool down a bit in Game 5, he’s still set to put up some big numbers.

The Warriors are not getting reliable offensive production from elsewhere. Curry has to get up well over 20 shots per game, and he’s taken 11 or more threes in each game in this series. Ime Udoka has hinted that the Celtics aren’t going to change their coverage against Curry, partly because the Celtics’ largest problem has been giving up good looks in transition.

If the Cs are better at defending in transition, Curry will have fewer easy opportunities to score. He is still getting decent shots and draining challenging ones in the halfcourt, however. The concern with backing just his points over is the risk of Boston going to full Curry-stopper mode. Doubling and trapping the Finals MVP favorite would limit his shot totals. That’s why we’re going with the assists combo here, as a form of insurance against the Celtics switching up their defense.

These are the five players who have taken the most *very tightly* contested shots this playoffs. Here are their FG%:

Curry might have only passed this line in two of four Finals games, but we still like the value here. He’s going to get most of the way there in points, and we could see an uptick in his assist total with a more aggressive Boston defense and improved shot-making at home from the other Warriors.

Smart Will Shoot and Shoot

Marcus Smart is unafraid of the moment to the point of sometimes being a detriment to his team. Smart got up 35 shots over the two games in Boston, and a combined 37 across the final two games of the Conference Finals. When the pressure ratchets up, Smart backs himself and will keep shooting even when the shots aren’t falling.

They’re the first trio to post 20-5-5 in the same NBA Finals since Kareem/Magic/Michael Cooper in 1984.

They’re the only trio to do it twice in the same playoffs. pic.twitter.com/f74yQNR0Ii

As a result, he’s passed this points line in four of the last five games. The only time he fell short was the Game 2 blowout, when he managed just two points on six field goal attempts. With the Warriors’ defense leaning heavily towards the star wing duo and worried about the lob threat of Rob Williams, Smart is often the forgotten man. Steve Kerr has been content with Smart jacking up outside shots.

The Defensive Player of the Year has scored 15 or more points in 11 of 19 postseason appearances. When he’s played 36 or more minutes, he’s passed it in 10 of 13. Ime Udoka is going to play his starters more and more minutes as this series goes on — Smart’s track record suggests he will get into the high-teens in scoring if he plays over 35 minutes again.

It’s a short price, but this is still a good value wager for a Warriors vs Celtics pick. It will take massive foul trouble or a blowout in either direction to stop Smart from reaching 15 points.