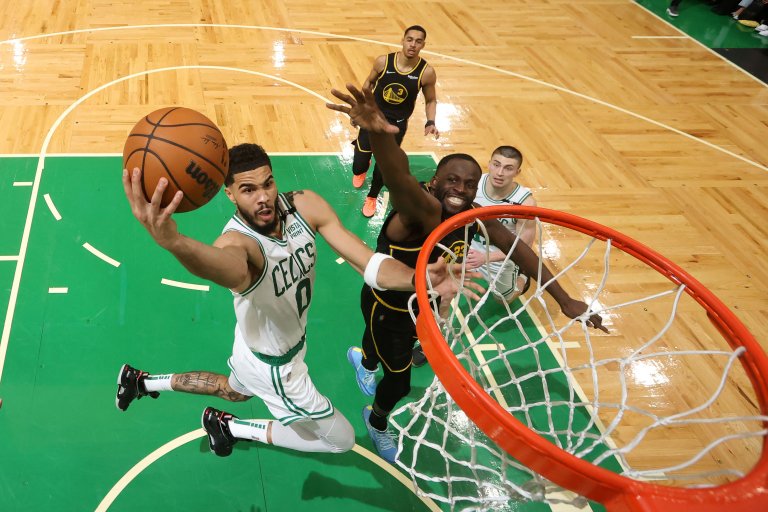 For the Golden State Warriors, Wednesday’s Game 3 loss was extremely painful. Not only were they completely outplayed by the Boston Celtics, but two-time MVP Steph Curry had to leave the game late in the fourth due to a foot injury.

Friday’s Game 4 odds suggest Curry will suit up for Golden State, but the line has already moved towards the Celtics.

Odds as of June 9th from FanDuel Sportsbook.

Boston is currently a 4-point favorite, up half a point from the opening line. The contest features a total of 214.5, which is up two points from the previous matchup. Tip-off is scheduled for 9pm ET at TD Garden in Boston, MA, with ABC providing the broadcast coverage.

As for the series market, the Celtics’ price has been significantly shortened in the NBA Championship odds. Boston entered Game 3 as a -115 favorite to raise the Larry O’Brien Trophy for a record breaking 18th time, but after grabbing a 2-1 series lead their odds are now -240.

Inconsistency plagued the Celtics offense in Games 1 and 2, but there were no such issues in Game 3. Jayson Tatum and Jalen Brown splashed 26 and 27 points respectively, while Marcus Smart rebounded from a two-point effort in Game 2 with 24 points.

The Celtics take Game 3 to go up 2-1 in the series pic.twitter.com/4aL4VvJKhT

A major issue in Game 2 was Boston’s willingness to settle for jumpers, instead of attacking the rim. The Celtics took just six shots at the rim in Game 2’s loss, and they quickly corrected that problem on Wednesday.

Boston attempted 14 shots at the rim in the first half alone and recorded a 52-26 advantage in the paint for the contest. So much emphasis around the NBA has been put on playing small and fast recently, but the Celtics flat out bullied Golden State in Game 3.

This finish from Tatum ? pic.twitter.com/BlOust1YHG

Boston forced 17 turnovers, had 16 more rebounds, and finished with a decisive 15-6 advantage on the offensive glass. Their primary rotation has a significant size advantage over the Warriors which could eventually force Steve Kerr to alter his game plan if the bullying continues.

If you’re a potential Golden State backer, it must be extremely discouraging that the team got 31 points from Curry before he left, plus a breakout game from Klay Thompson and they still got trounced.

Thompson entered Game 3 shooting 30% through two games, but responded with 25 points. Curry poured in six triples and shot 55% from the field, but the big story is the status of his foot.

The Warriors heart and soul was seen limping after the game with his foot heavily wrapped. Both he and coach Kerr were adamant that he’d be suiting up on Friday, but Curry’s teammates seemed a bit more concerned.

Curry has accounted for 30% of Golden State’s points through three games and the Warriors need him at 100% to have any chance of coming back from this deficit. Thompson flashed in Game 3 but that may not be sustainable.

Both Jordan Poole and Andrew Wiggins, the team’s third and fourth leading scorers, struggled again to produce in Game 3, leaving Golden State without many reliable offensive options outside of Curry.

Without a further update on Curry’s health, it’s tough to back Golden State in Game 4. If you’re going to play a side, Boston makes the most sense because if Curry is limited that -4 number will keep creeping up.

Steph is ready to go for Game 4 ? pic.twitter.com/DfuW5dOjDT

One bet worthy to attack at the moment is over 108.5 points for the Celtics. They’ve cleared that number in two of three Finals games so far, and the primary reason they didn’t in Game 2 was because they pulled their starters with over 10 minutes remaining.