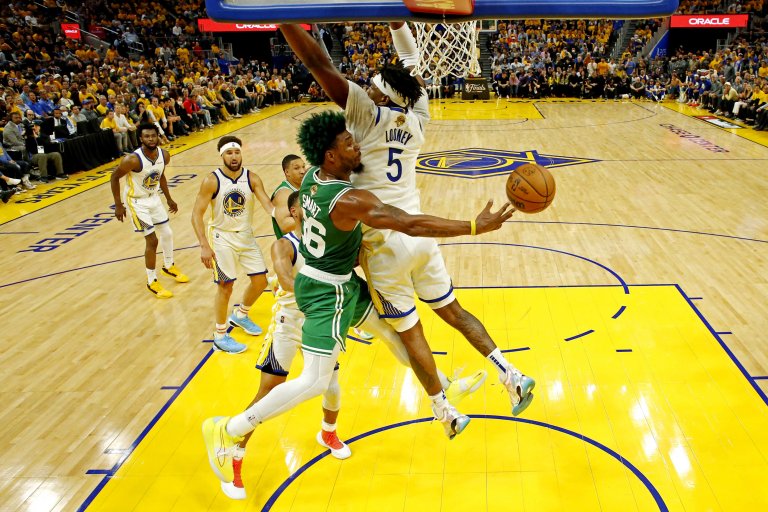 The NBA Finals are all square thanks to a convincing Warriors victory in Game 2. After squandering a 15-point lead in the series opener, Golden State rebounded on Sunday versus the Celtics, blowing the contest open in the third quarter before cruising to a 107-88 win.

The scene now shifts to Boston on Wednesday for Game 3, where the Celtics will be laying points for the first time all series.

Odds as of June 6th from FanDuel Sportsbook.

Boston is currently a 3.5-point favorite, in a contest that features a total of 212.5. Tip-off is scheduled for 9pm ET at TD Garden in Boston, MA, with ABC providing the broadcast coverage.

As for the series market, the Celtics remain the chalk in the NBA Championship odds, although barely. Boston entered Game 2 as a -190 favorite to raise the Larry O’Brien Trophy for a record breaking 18th time, but that number has been sliced to -115.

Golden State took a two-point lead into the half in Game 2, before coming out for the third with their hair on fire. The Warriors outscored the Celtics 35-14, which was their best point differential in any Finals quarter in team history.

The Warriors outscored the Celtics 35-14 in the 3rd quarter. The +21 is their best point-differential in any quarter in the Finals in franchise history.

Boston had more turnovers (5) than field goals made (4) in the 3rd quarter. pic.twitter.com/GGXOVBmtOc

Golden State held Boston to just four field goals during the opening 12 minutes of the second half, and built a 29-point lead two minutes into the fourth quarter. At that point, the Celtics emptied their bench content to go home with a series split.

Steph Curry led the way for the Warriors with 29 points, but it was far from an efficient effort. He made only 9-of-21 attempts, but did splash five three’s. Jordan Poole scored 17 points after a quiet Game 1, but like Curry and most of the Golden State stars, his efficiency was lacking. Poole was 6-of-14 from the field, while Klay Thompson continued to struggled.

Thompson managed only 11 points and is now shooting just 30% through two games. Not to be outdone, Andrew Wiggins was a dismal 4-of-12, but fortunately for the Warriors most of the Celtics secondary pieces didn’t show up.

A game after scoring 26 points, Al Horford was held to one field goal. Marcus Smart also contributed only 2 points, after splashing 18 in Game 1. Leading scorer Jayson Tatum did bounce back from a horrific series opener with 28 points, but Boston shot just 37.5% for the contest, and managed only 6 points at the basket.

The big narrative heading into Game 2 was Golden State’s prolific record when coming off a loss. Curry and Co. delivered as many thought they would, but now let’s not overlook Boston’s ability to bounce back.

The Warriors are now 5-0 this postseason following a loss, outscoring their opponents by an average of 15.4 in those games.

That PPG diff is the 5th-highest across the past 50 postseasons.

The Celtics are a perfect 6-0 after a defeat this postseason, covering in all six instances and posting an average win margin of 15.5 points.

The Warriors have been historically good at home this postseason per the advanced metrics, but on the road it’s been a different story. Golden State’s offensive rating is 9 points lower away from home, while their defensive rating is 10 points worse. They own a 12.5 net rating at the Chase Center, but are a -6.6 in that category as visitors.

They’re 3-4 overall on the road, and just 2-5 ATS. They’ve lost two of their past three road games by double-digits, and the lack of production they’re getting from their secondary pieces through two games, most notably Thompson, is concerning.

Boston meanwhile, had plenty of issues with their ancillary scoring as well in Game 2, but players like Horford, Smart and Derrick White were difference makers in Game 1.

What a #NBAFinals debut for Al Horford!

All three have averaged more points and better long range shooting numbers at home this season than on the road, and will be counted on by the Celtics to produce like they did in the series opener on Wednesday.