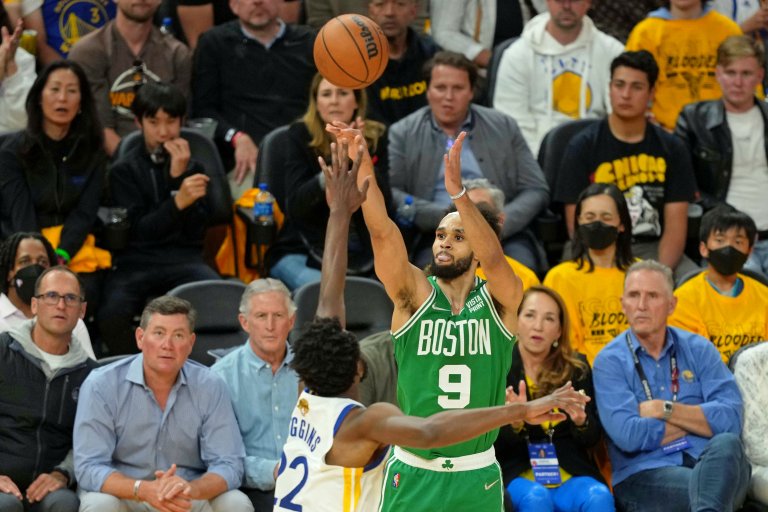 Game 2 of the 2022 NBA Finals takes place on Sunday June, 5th with the Golden State Warriors looking to bounce back after a fourth-quarter collapse in the series opener. The Dubs are 4.5-point favorites for Game 2 despite the Celtics coming from behind to win in emphatic fashion on Thursday night.

Having lost homecourt advantage, Sunday’s clash is a must-win for the Warriors. Heading to Boston with the series 2-0 would leave Golden State with a gargantuan mountain to climb.

Odds as of Jun 5 at FanDuel.

The Warriors got an historic first quarter from Steph Curry in Game 1, and the two-time MVP is given the highest points line for Sunday night’s matchup at 28.5. Golden State needs Curry at his best if they are to fight back in NBA Championship odds.

Derrick White produced an explosive offensive performance in Game 1, scoring 21 points and draining five threes. After struggling as a scorer earlier in the postseason, White has been more effective since the birth of his child, averaging over 15 points per contest across the last five.

As Draymond Green made a point of in the aftermath of the opener, White hit some shots that you wouldn’t expect him to make. The former Spur was also left open on occasion, however, and that’s an inevitability in Game 2 as well with Golden State focusing their defense on Jayson Tatum and Jaylen Brown.

White got up eight three-point attempts on Thursday. He’s shot seven or more times from beyond the arc in three of the last five games, and he’s set for another high minutes total with the Celtics needing his defensive prowess. The three-point shots are going to keep coming.

This is the Derrick White that the Spurs saw in the bubble back in 2020 that made so many people think he could be the #1 guy for San Antonio.

Happy he is showing out in his first ever finals appearance. Go Derrick Go.

The 1.5 line for White’s threes is on the low side. While far from a knockdown shooter, he is going to have the volume, and he’s been more effective from deep than he was for the first few months of his Celtics tenure. Having recorded two or more threes in each of the last three games, there’s value on this over at -130.

The Boston Celtics defense gave Steph Curry some easy looks in the first quarter of Game 1. It’s a mistake they’re unlikely to repeat, yet Curry is still going to get up plenty of outside shots. Boston was able to slow down Golden State’s offense, and when a defense can do that, it often leads to the star player getting up more field goal attempts.

Curry has made five or more threes in four of his last seven games, including making seven of 14 attempts in Game 1. He has reached double figure three-point attempts in outside shots in 10 of 17 games this postseason, and the volume is bound to be there once again in Sunday night’s Game 2.

There is a dependency on Curry in the halfcourt. Jordan Poole’s defense makes him borderline unplayable, leaving the Dubs short on shot creation, particularly with the Celtics doing a good job of disrupting some of their favored actions.

Over 4.5 threes is a great value wager at +112 for the greatest shooter of all-time. He’s going to have the quantity, and even this Celtics defense cannot stop Curry’s outrageous shot-making ability.