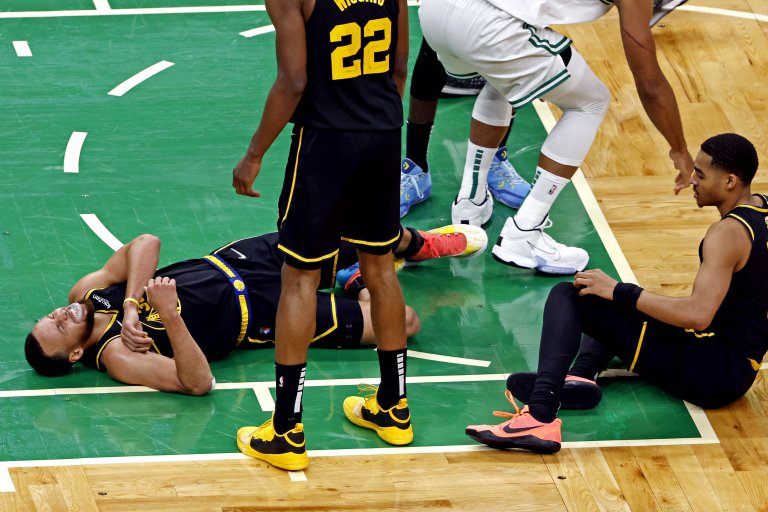 As the Golden State Warriors prepare to face the Boston Celtics in Game 4 of the NBA finals, everything appears to be stacking up against them.

They are down 2-1 to the Boston Celtics in the best-of-seven series. Game 4 is at Boston’s TD Garden. And it’s entirely possible that Steph Curry – Golden State’s best player and arguably the NBA’s best player – may not be available for Game 4. Curry suffered a leg injury during Game 3. At the bare minimum, he won’t be 100% healthy.

All of these elements are conspiring to swing the NBA betting lines on the 2022 NBA Finals from favored status for Golden State to listing Boston as the current chalk.

Game 4 of the NBA Finals is set for 9 pm ET on Friday, June 10 at TD Garden. ABC is carrying the broadcast. Canadians can watch the game on TSN.

Warriors in a Heap of Trouble

Steph Curry with the update on his left foot injury.pic.twitter.com/okDgIiTkmm

Beyond Curry, Golden State isn’t getting much in terms of consistent offensive contribution. Through the first three games of the NBA Finals, he’s leading the Warriors with 25.5 points per game.

Klay Thompson broke out of a shooting slump and hit for 25 points in Game 3. However, Golden State got just two points from Draymond Green. Andrew Wiggins and Jordan Poole are also underperforming.

Curry was hurt in the fourth quarter when Boston’s Al Horford rolled on his left leg during a scramble for  loose ball. Other players on the court remarked that they could clearly hear Curry screaming in pain.

He tried to keep playing but after about 90 seconds, was subbed out by coach Steve Kerr with 2:19 left to play.  Arriving for his postgame media availability, Curry’s limp was noticeable.

Steph Curry: “I’ll be all right. Got caught underneath Al.” Said he’s in pain. Same foot sprain that he suffered against Boston earlier this season, but “not as bad”. Said he doesn’t believe he will miss Game 4.

Curry admitted that the injury is similar to one he suffered in a March 16 game, also against Boston. In that contest, Celtics guard Marcus Smart crashed into Curry’s left leg. Curry suffered a left foot injury. He sat out a month and was utilized as a sub during the Warriors’ first four playoff games against the Denver Nuggets.

Speaking to reporters, Curry insisted that he’d be playing in Game 4. He stated that he felt all right.

These Aren’t the Warriors of Old

This Golden State team isn’t the same as the club that reached five straight NBA Finals from 2015-19. Curry was also the star and leader of those teams. However, his supporting cast was much deeper and stronger.

There’s no Kevin Durant to be a second scoring option and draw defenders away from Curry. Thompson isn’t nearly as versatile a threat as the five-time all-star was prior to losing consecutive seasons to ACL and Achilles tendon injuries. Green hasn’t been a factor in the series.

The fact of the matter is an all right Curry won’t get it done for Golden State. The Warriors need Curry to be outstanding to hold out any hope of beating the Celtics. You can’t bet them right now.