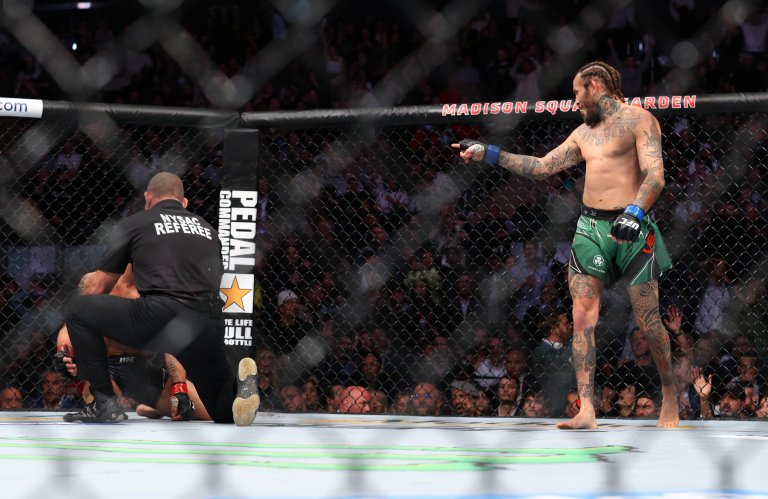 Prelim action is scheduled for 4:30pm ET on Saturday afternoon at Pechanga Arena in San Diego, California. The main card follows at 7:00pm ET, with all the action available on ESPN.

Marlon Vera has earned a performance bonus in each of the contests during his current three-fight win streak, which has lifted him to No. 5 in the UFC bantamweight rankings.

Marlon Vera is aiming for his third win in as many meetings with ranked opponents. “Chito” tallied a five-round unanimous decision win over Rob Font four months ago at UFC Vegas 53. That came on the heels of a sensational KO win over Frankie Edgar at UFC 268 last November.

Vera is the all-time leader among UFC bantamweights with nine finishes, including four submission victories. He has also demonstrated his ability to go deep, with four of his past six contests getting decided by the judges.

Chito has had his hands full during his current 3-0-0 run. He has been outstruck on two occasions, including a wide 271-159 margin in his recent date with Rob Font. Vera has also been taken down five times over that stretch.

Dominick Cruz has shown steady improvement since making a comeback after three-and-a-half years away from the octagon. “The Dominator” failed to live up to his name in his long awaited return at UFC 249, mustering just 33 total strikes before suffering a second-round TKO loss to Henry Cejudo in his bid to reclaim the 135-pound strap.

Henry Cejudo finishes Dominick Cruz in the second round and retires on top.

Cruz has followed up with consecutive wins by decision, capped by a three-round unanimous decision victory over Pedro Munhoz at UFC 269, which also earned him his fourth career Fight of the Night bonus.

Dominick Cruz is coming off of a win against Pedro Munhoz.

After losing the 1st round, Cruz took complete control of the fight.#UFCSanDiego pic.twitter.com/lKorhCScxq

Despite showing flashes of the speed and agility that powered his long reign as UFC bantamweight champion, Cruz’ ability to go deep in a five-round clash with an accomplished grappler like Vera remains in doubt.

Nate Landwehr aims to tally consecutive wins for the first time since joining the UFC in 2020. “The Train” claimed a third-round submission victory and Performance of the Night bonus in his last outing against Ľudovít Klein at UFC Vegas 40.

However, Landwehr has also suffered stunning first-round KO losses in two of four UFC clashes to date, and has absorbed a massive 5.96 significant strikes per minute over his first four UFC appearances.

In addition to enjoying a two-inch height advantage, Onama also enjoys a two-inch reach advantage over Landwehr. Onama has recorded five career first-round knockouts. However, he came up short in his lone career contest to go the distance, a three-round unanimous decision loss to Mason Jones in his promotional debut at UFC Vegas 41.

Azamat Murzakanov (-165): Murzakanov has finished opponents nine times while compiling an 11-0 pro record, while his opponent Devin Clark has been outclassed in two straight losses as a light heavyweight.
Bruno Silva (-295): Silva went the distance before losing by decision to top contender Alex Pereira last time out, ending a seven-fight win streak.
Youssef Zalal (-127): Zalal is coming off three straight heartbreaking losses by decision, but is poised to rebound against Da’Mon Blackshear, who is making his promotional debut.