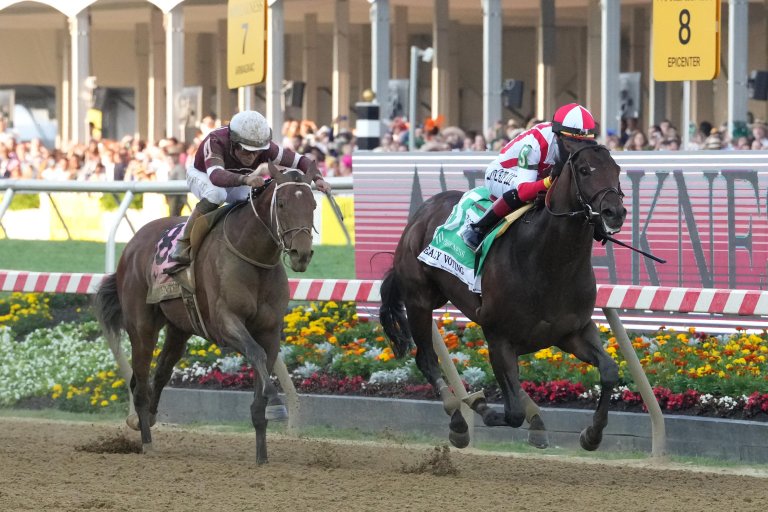 Three-year-old racing this year has not only been competitive, but impressive. Rich Strike shocked Epicenter and Zandon in the Kentucky Derby. Early Voting was well rested and took care of Epicenter in the Preakness Stakes. Mo Donegal won the Belmont over Rich Strike, and last week Cyberknife topped Taiba and Jack Christopher in the Haskell Stakes.

Who is the best three-year-old this year? Saturday’s Grade 2 Jim Dandy Stakes matches Epicenter, Zandon, and Early Voting. That group and several others are eyeing the Travers Stakes where Rich Strike will run next.

In addition to the three-year-olds, Saturday at Saratoga Race Course features the Grade 1 Vanderbilt Handicap. Jackie’s Warrior will be a big favorite, but is he the one to bet on?

How should we bet the two big races this Saturday at Saratoga?

The mile-and-an-eighth $600,000 Jim Dandy is slated for a 5:37 pm EST post time, about 45 minutes after the Vanderbilt goes. Both races will be televised by FOX. The weather is expected to be in the 70s with very little chance of rain. With a small field, we might need to be creative to find value. Understanding horse racing bet types can aid how you attack the two feature events.

After winning the Risen Star Stakes and Louisiana Derby, Epicenter was the favorite on the first Saturday in May at Churchill Downs.

While everyone will remember Rich Strike’s incredible run to glory, Epicenter ran well. In eight career races, he has four wins, three seconds, and has earned $1.9 million.

Two weeks after the runner-up performance in the Kentucky Derby, Epicenter ran into the well-rested and opportunistic Early Voting.

Early Voting has been perfectly managed by trainer Chad Brown. He won his debut in December and took the Grade 3 Withers in February. After just missing against Mo Donegal in the Wood Memorial, Brown recognized the suicidal pace scenario likely in the Kentucky Derby and pointed his talented colt to the Preakness.

Zandon has not run since the Kentucky Derby. He seemed to be in a great spot headed for home in Louisville, but couldn’t go by Epicenter, never mind Rich Strike. He won the Blue Grass Stakes in April.

Before winning in Lexington, Zandon finished third in the Risen Star behind Epicenter, and just missed against Mo Donegal in the Remsen Stakes closing out 2021. Saturday’s distance may be his best.

Tawny Port sandwiched wins between a seventh-place performance in the Kentucky Derby. He beat an ok but not great field three weeks before the Derby in the Lexington Stakes, and took the Ohio Derby, a good but not top tier three-year-old race last month.

Western River has two career wins in seven starts and was not competitive in his only graded stakes race.

The competition for top three-year-olds this year is wide open. Early Voting has done nothing wrong, but also was positioned incredibly well on Preakness day. Now Epicenter is well rested and meeting his rivals on equal footing at Saratoga Race Course.

A purse of $350,000 attracted only six horses to the Vanderbilt, and that has a lot to do with nobody wanting to run against Jackie’s Warrior. He has 11 wins in 15 career races and has lost only once racing around a single turn. However, does he have better than an 80-percent chance of winning. If not, you should be looking elsewhere.

Jackie’s Warrior is three-for-three this year including romps on Derby Day in Louisville, and Belmont weekend on Long Island.

He is four-for-four at Saratoga, and has 10 career wins in graded stakes. The rest of the field has two total graded stakes triumphs. That said, he was forced into a speed duel in the Breeders Cup last year and finished sixth. Will somebody hook him on Saturday?

Ny Traffic is approaching $1 million in career earnings and has changed his game of late. He used to compete at the classic distances and was the runner-up to Maxfield in the Matt Winn Stakes and Authentic in the Haskell. He has cut back to sprints recently, and the results are strong.

While facing weaker competition than Jackie’s Warrior, Ny Traffic has won his last four one-turn races. He has always been a tough, hard worker, and maybe is better going short. That said, he will need someone to battle Jackie’s Warrior early on so that he can sit just off the pace and make the first run.

Willy Boi has won three straight, stepping up in class for each victory.

Like Ny Traffic, Willy Boi probably isn’t as quick as Jackie’s Warrior early on. That said, he is in terrific form and this is his preferred distance.

Kneedeepinsnow and Doc Amster both tend to be forwardly placed. Neither has hit the board in a graded stakes race, but if either sends, could they at least make Jackie work early? It is a big question as to whether they possess enough speed to keep up.

Jackie’s Warrior is far and away the most likely winner at Saratoga Race Course, but the ROI betting on him is not attractive. Ny Traffic has traded blows with top horses, seems to have evolved nicely into a sprinter, and has the best opportunity to pull the upset.