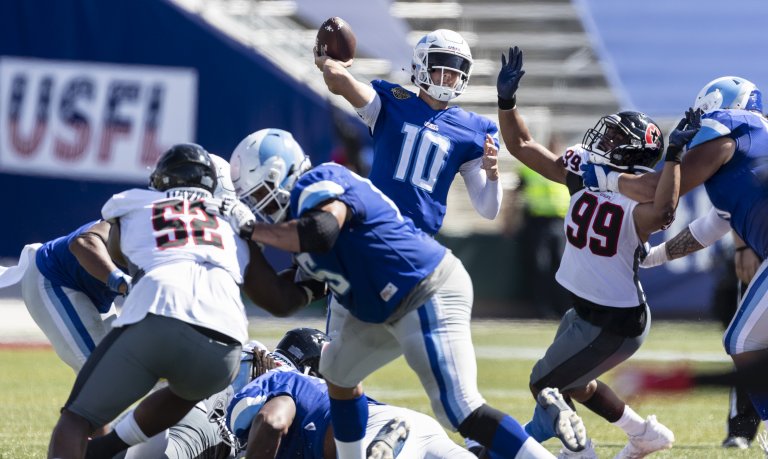 The USFL regular season concludes with a four-game slate this weekend starting on Saturday (June 18, Noon ET)
Birmingham is the biggest favorite on the board at -3.5 points over Tampa Bay, while the Michigan vs Pittsburgh matchup features a slate-high 42 point total
See all of the Week 10 odds below, plus analysis and betting predictions

The USFL’s inaugural regular season wraps up this weekend with a four-game slate. The action gets started at Noon ET on Saturday with a pair of games, and concludes on Sunday with two more matchups.

Week 10 will definitely be the trickiest to handicap as all of the playoff matchups and seedings have already been finalized, leaving us guessing which coaches will play their key starters and for how long.

Nevertheless, there’s value to be had in the betting market, so checkout the odds below plus a few bets to target.

Odds as of  June 17th at Caesars Sportsbook.

The 8-1 Birmingham Stallions, fresh off their only defeat of the season, opened up as the biggest favorite at -3.5 over the recently eliminated Tampa Bay Bandits. That game also features the lowest total of the slate at 40.5 points, a number they fell 14.5 points short of in their only meeting this season.

The highest total belongs to the Michigan and Pittsburgh contest, a matchup which features two of the three worst scoring defenses in the league. New Jersey meanwhile, is the shortest favorite on the board at -2.5 over Philadelphia, and in my opinion a glaring value.

All USFL games are being played at Legion Field and Protective Stadium in Birmingham, Ala. Television broadcasts are being shared by FOX Sports and USA this week.

There’s extra intrigue to this matchup as the two teams will also meet next week in the semifinal playoff round. Both head coaches are claiming they’re playing to win, and that should favor the Generals.

The MOST All-USFL players in the league ??

Since a Week 1 loss, New Jersey has racked up eight straight victories, including a 24-16 win over Philadelphia earlier in the season. The final score was actually flattering to the Stars as the Generals completely dominated the play. New Jersey held a 36:48 to 32:12 advantage in time of possession and ran 28 more plays.

The Generals boast the league’s third-best scoring defense and the league’s number one rushing attack. They outgained Philadelphia by nearly 200 yards in their first meeting, and are a perfect 5-0 within the division.

The Stallions may have won eight of their past nine, but it’s the under I want to target in this matchup. Each of the Bandits last three contests have fallen well short of the total, while Birmingham’s last two outings have produced only 32 and 19 points respectively.

These two teams played to a 16-10 decision in favor of the Stallions in Week 4, and only one defense in the USFL allows fewer points than Birmingham.

Tampa Bay was supposed to be one of the league’s most exciting teams but they’ve been anything but that. They rank second to last in points per game and starting QB Jordan Ta’amu has been picked off a league-high 11 times.

Both of these teams have been eliminated from playoff contention, although the number one pick in every round of next year’s draft is up for grabs.

This Sunday, the WINNER of the game between the 1-8 @USFLPanthers & @USFLMaulers will be awarded the 1st pick in each round of the 2023 Draft.

EVP of Football Ops @DarylJohnston breaks it down ⬇️ pic.twitter.com/geApPz7GM0

That honor will go to the winner of this game as revealed on Friday by the league, meaning both teams will be incentivized to go all out.

Michigan hasn’t won a game since it blanked Pittsburgh back in Week 3, while the Maulers are winless since Week 5. Pittsburgh has performed better defensively than the Panthers, and are fresh off holding Philadelphia, the highest scoring offense in the league, to only 17 points.

The Panthers, on the other hand, have coughed up at least 25 points in every game since their lone victory, while forcing the fewest turnovers and racking up a measly 13 sacks.

Last, but not least, we’ll be fading New Orleans in the regular season finale. This is a let down spot for the Breakers who have absolutely nothing to play for after clinching the final playoff berth last week.

Houston, meanwhile, just handed Birmingham its first loss of the season and have been much more competitive than their 2-7 record indicates. They played phenomenal defense against the Stallions, holding them to just 15 points, while racking up a safety, an interception and two sacks.

This trio has been a force on defense all season long ?

Five of their seven losses have been by a single score, including a 7-point loss to New Orleans in Week 4. If a couple of those games go their way instead, we could be talking about a potential playoff team.

With the Breakers likely looking ahead to their playoff game next week, give me Houston to pull off its second straight upset.