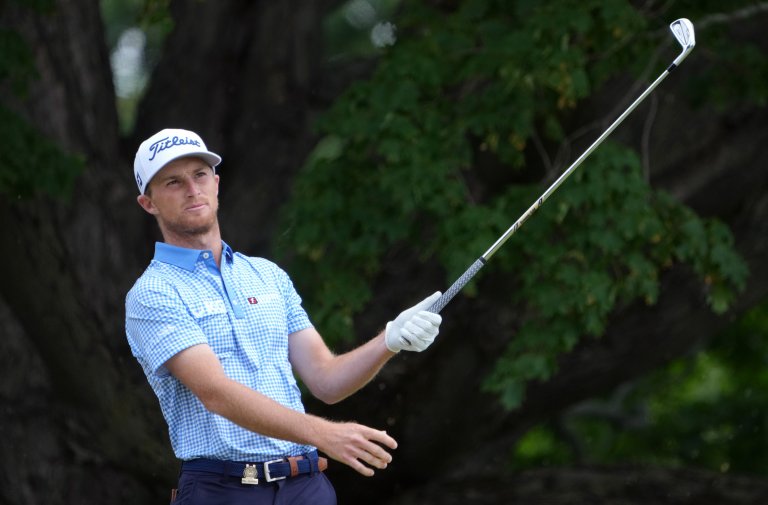 Jun 18, 2022; Brookline, Massachusetts, USA; Will Zalatoris watches his shot from the sixth tee during the third round of the U.S. Open golf tournament. Mandatory Credit: John David Mercer-USA TODAY Sports

Will Zalatoris and Matt Fitzpatrick co-lead the U.S. Open by one shot over Jon Rahm after round three
16 players are within five shots in a tight leaderboard
See the updated 2022 U.S. Open odds below for Sunday’s final round below

Through 54 holes at the U.S. Open, Will Zalatoris and Matt Fitzpatrick co-lead by one stroke over defending champion Jon Rahm. Zalatoris shot a third round best score of 67 to top the leaderboard while Fitzpatrick had a great 68.

Neither have held a 54-hole lead at a major championship. They also both haven’t won on the PGA Tour, though Zalatoris has contended at several majors and Fitzpatrick has won seven times on the DP World Tour.

Heading into the championship, Fitzpatrick, who won the 2013 U.S. Amateur at this golf course, had +3000 odds to win outright, while Zalatoris was priced at +3500. Lurking behind them is defending champ Rahm, who double bogeyed the final hole Saturday to fall out of top spot. A further stroke behind are a pair of major champions in Scottie Scheffler and Keegan Bradley, with 2011 U.S. Open winner Rory McIlroy three shots adrift.

Read on to see the updated odds and best value bets heading into Sunday’ final round.

Odds as of June 18th at DraftKings Sportsbook

Top Of The Board

Will Zalatoris and Matt Fitzpatrick are no strangers to being on the first page of the leaderboard in majors, as just last month at the PGA Championship they were tied for second entering the final round. Fitzpatrick wound up T-5th, whereas Zalatoris very nearly won his first major, losing in a playoff.

The 3 leaders in strokes gained total per round at the majors since the beginning of 2020 (through Saturday):

Despite neither of them ever winning a PGA Tour event, it’s not as if they’re struggling pros, with Zalatoris posting five top-8’s in the last seven majors, and Fitzpatrick winning seven times in Europe. Of the two of them, Zalatoris has contended in far more majors in recent years, and he’s surprisingly sixth in putting this week, given that the putter has long held him back. He’s the better play at +300 compared to Fitzpatrick.

The player that is most desirable to wager on, however, is Jon Rahm, who won it last year and is the second ranked player in the world for a reason with his clutch play. He’s second in SG: off-the-tee and third in putting through 54 holes, and he’s shot 68 or 69 in four straight Sunday’s.

Scottie Scheffler (+600): Reigning Masters champ Scottie Scheffler still has an intriguing number, as he sits just two back. Scheffler led by two strokes midway Saturday before a rough stretch dropped him out of it. He’s first in strokes gained approach and sixth off-the-tee through three days. Scheffler has four victories on the campaign, two of which came when he was trailing entering the final round (when he was two back, just like he is now).
Rory McIlroy (+1000): Rory McIlroy didn’t have his best stuff on the greens on the front nine Saturday, but made up for it on the back nine to keep himself in contention, as he’s just three behind. He’s 16th in both SG: off-the-tee and approach after 54 holes, and leads the field in putting, picking up over a whopping seven strokes on the greens this week. He’s fifth in final round scoring, with rounds of 68 or better in five of his last six Sunday’s, including a 62 to win the RBC Canadian Open last weekend.