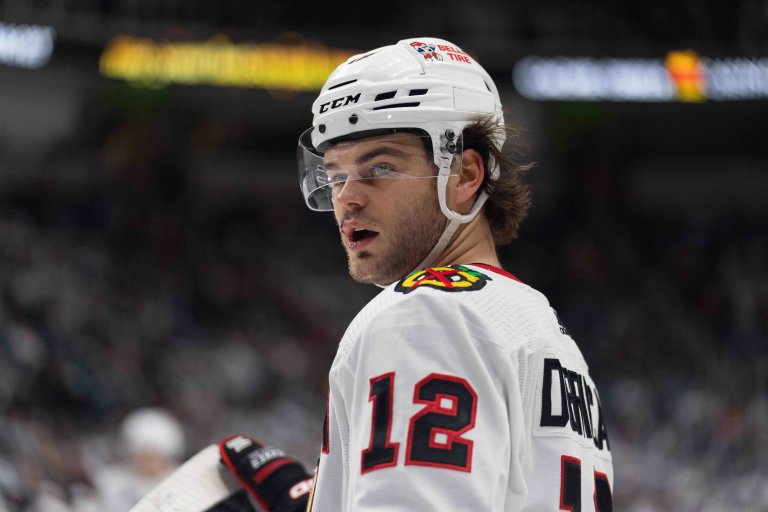 The 2022 NHL Entry Draft took place in Montreal on July 7th-8th
The Blackhawks made a number of deals, including trading Alex DeBrincat to the Senators
Read below to see the updated Stanley Cup odds for all 32 teams following the 2022 NHL Draft

The 2022 NHL Draft took place in Montreal on July 7th-8th and featured some surprising selections and big trades. Projected first overall pick Shane Wright not only wasn’t chosen first overall by the Habs but slipped all the way to fourth and the Seattle Kraken.

The Chicago Blackhawks were the most active team at the NHL Draft, trading away Alex DeBrincat and Kirby Dach. It’s no surprise the Blackhawks are sitting at the bottom of the 2023 Stanley Cup odds.

It wasn’t a complete shock that hulking Slovakian forward Juraj Slafkovsky was taken first overall by Montreal, but the tension when Wright got to the stage after being selected 4th by the Kraken was through the roof, culminating with a glare that many say was meant for Montreal’s draft table.

The Canadiens also picked up Kirby Dach from the Chicago Blackhawks and sent hard-hitting defenseman Alex Romanov out of town. Despite drafting Wright and adding Dach, the Habs still have the second-worst Stanley Cup odds at +15000.

While many expect Slafkovsky and Wright to compete in the Calder Trophy odds next season, one of the favorites will likely be Wright’s teammate Matty Beniers, who had nine points in just 10 games with the Kraken last season after being selected second overall in 2021.

Some notable transactions that happened during the two-day draft include the Red Wings adding Ville Husso from the Blues. That will solidify their goaltending situation with Alex Nedeljkovic, who struggled in his first year with Detroit last year.

A couple of veterans were also re-signed as Marc-Andre Fleury will be back for the Wild and his former teammate Kris Letang signed a new six-year contract with the Penguins. All eyes will be on Pittsburgh next week to see if they can get Evgeni Malkin to return and bring the whole band back again.

There was only one team that saw movement in the 2023 Stanley Cup odds and that was the squad that made the biggest addition. The Senators acquired Alex DeBrincat from the Blackhawks in exchange for three draft picks.

Although the 24-year-old winger has just one year left on his contract, he is a bona fide 40-goal man, hitting the mark twice already and probably would’ve made it three times had it not been for the Covid-shortened season in 2020-2021.

Alex DeBrincat has his number and #Sens fans have their newest wallpaper!! 🔥1️⃣2️⃣#GoSensGo pic.twitter.com/0jYQSpft1H

The Senators Stanley Cup odds shortened from +7500 to +6500 after the trade, so while they’re still massive longshots, they should be taken more seriously in the Eastern Conference next season. The Sens have a ton of young improving forwards in Brady Tkachuk, Tim Stutzle and Josh Norris.

The Sens also have a Norris Trophy caliber defenseman in Thomas Chabot and an emerging starting goalie in Anton Forsberg, so they could surprise next year. Ottawa might be a good bet in the Eastern Conference Playoff odds, but Lord Stanley’s mug still seems a little far-fetched.

The defending champion Colorado Avalanche remain favored in the Stanley Cup odds at +400. The Avs could have a new goalie for the third straight season, however, after acquiring Alexandar Georgiev from the New York Rangers. The trade makes Darcy Kuemper dispensable.

Joe Sakic let all 32 GMs know he’s ready and willing to move Darcy Kuemper’s rights for a late-round pick. Wouldn’t be shocked if that materializes given the scarcity on the goaltending market.

Edmonton traded Zack Kassian and veteran defenseman Duncan Keith announced his retirement. That’s almost $9 million of cap space for GM Ken Holland to work with. Despite the transactions, oddsmakers still have the Oilers as +1800 longshots in the Stanley Cup odds.

Goaltender Mike Smith ($2.2 million) and defenseman Oscar Klefbom ($4.1 million) are also both expected to spend next season on long-term injured reserve. If all the aforementioned transactions came to fruition, the Oilers could have as much as $22 million to work with this summer.

The Oilers obviously need a starting goalie, but it’s not like Mike Smith was a Vezina contender. We all saw the impact Evander Kane had in his short stint with the team last year, so the added money makes Edmonton a dangerous team to watch out for.

Edmonton is currently longshots in the Stanley Cup odds, but those odds could change once free agency opens up on Wednesday. With all the cap space they have, expect the Oilers to be in on some of the big names and potentially see their betting odds improve.