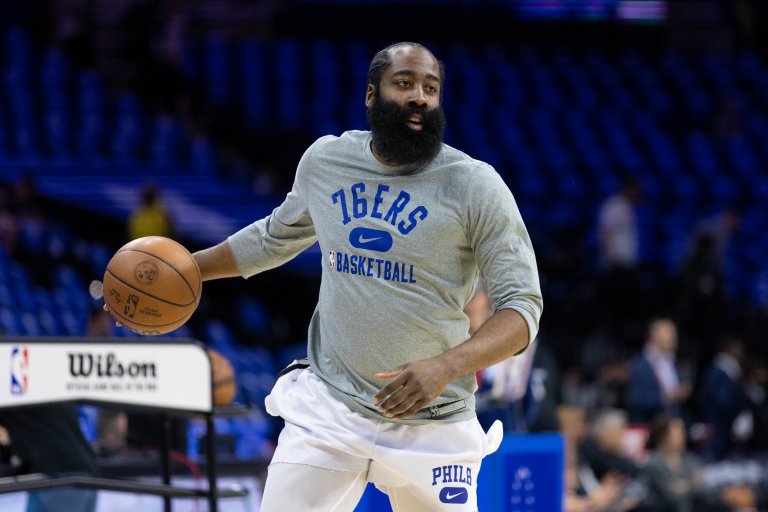 May 12, 2022; Philadelphia, Pennsylvania, USA; Philadelphia 76ers guard James Harden warms up before action against the Miami Heat in game six of the second round of the 2022 NBA playoffs at Wells Fargo Center. Mandatory Credit: Bill Streicher-USA TODAY Sports

James Harden just signed a two-year/$68 million extension to remain with the Sixers
Updated look at the Philadelphia 76ers championship odds
Below, get the latest NBA betting odds and analysis on the 76ers’ NBA Finals chances

Fresh off a frustrating early exit in the 2021-22 NBA Playoffs, Dary Morey and the rest of the Philadelphia 76ers front office knew they had to have a busy offseason. They’ve brought in several new additions, including the likes of P.J. Tucker, De’Anthony Melton, and Danuel House. James Harden signing his new two-year/$68 million extension is likely the last major piece to the puzzle. However, the 76ers championship odds for the 2022-23 NBA season have yet to take a big jump.

Here’s a look at the updated NBA championship odds following Harden’s decision to *officially* return to Philadelphia this offseason.

Odds as of July 21, courtesy of BetMGM. Claim this BetMGM promo code before betting.

Tucker, Melton, and House provide some much-needed wing depth and floor spacing to the Sixers roster — something that was only made possible due to Harden opting out of his $47 million player option and signing back on a smaller annual salary.

However, the NBA odds are still refusing to label the 76ers as a serious threat to come out of the Eastern Conference. BetMGM currently has the 76ers championship odds at +1400 — tied for the third best in the conference, with the Boston Celtics and Milwaukee Bucks way ahead at +550.

The 76ers championship odds have dipped as low as +2000 on some sportsbooks this offseason. Clearly, some of the oddsmakers are still unimpressed with the state of the roster Daryl Morey has constructed.

Daryl Morey — with an assist from Harden — has had a brilliant offseason. Harden’s salary reduction freed the Sixers to sign Tucker, House — and Philly may not be done dealing.

Daryl Morey and the Sixers Need to Stay Aggressive

Finding a way to fit Tucker, Melton, and House under the cap (thanks to Harden taking a pay cut) was some shrewd work by Morey and Co. However, if they want to seriously contend with the Celtics and Bucks this winter, more work needs to be done.

Tobias Harris and Matisse Thybulle have both had their names floated around in trade talks this offseason. Harris’ lofty salary could be used to acquire another floor spacer like Eric Gordon, who thrived playing alongside Harden with the Houston Rockets.

Thybulle, on the other hand, is unlikely to receive a second contract in Philadelphia, and could be used to land another shooter/backup ballhandler.

Patrick Beverely is a name who has been mentioned as a good fit in Philly. He has a good relationship with Morey and would add some much-needed toughness to the Sixers’ roster.

Tired: The Sixers are going after Eric Gordon to turn into Rockets East

Wired: The Sixers will go after Patrick Beverley to turn into Rockets East

76ers Championship Odds – It All Hinges on James Harden’s Health

Filling out the depth is nice and all — NBA coaches need 7-8 guys they can trust in the postseason. However, the 76ers championship odds ultimately hinge on James Harden’s ability to stay healthy.

The whole point of acquiring him in the first place was to give Joel Embiid — a top choice in the NBA MVP odds — an elite running mate on offense. Harden was great in the passing game last year, but his scoring never reached the level Philadelphia was hoping for, especially in the playoffs.

If the Sixers want to see their title odds improve, Harden needs to show up to training camp in elite shape — ready to have an All-NBA type season.