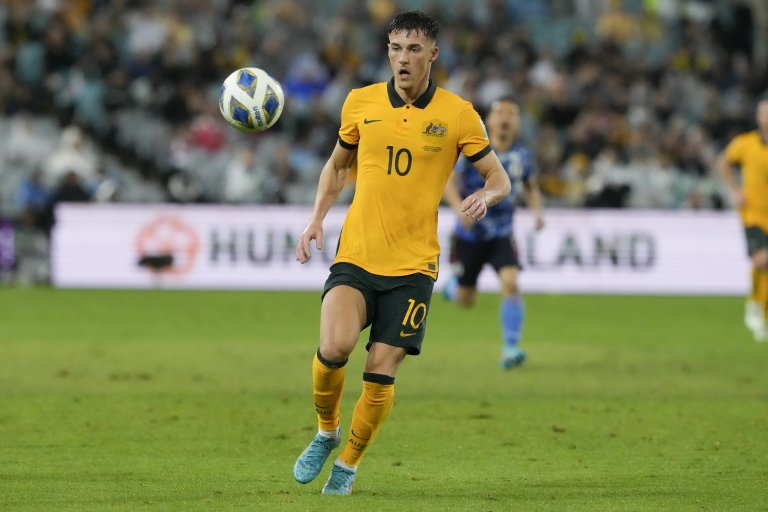 It is United Arab Emirates vs Australia in a World Cup qualifier in Doha on Tuesday, June 7 at 2:00 pm ET, with the winner playing Peru in the inter-confederation playoff for a place in Qatar 2022 on Monday, June 13.

To reach this winner-takes-all playoff, both teams have played no less than 18 games, progressing through two group stages before this final eliminator.

We preview United Arab Emirates vs Australia and offer below some analysis, team news, and picks from the World Cup odds for this massive playoff.

Odds as of June 6 at Caesars Sportsbook.

The draw after 90 minutes also offers a decent return at +215, an implied probability of 31.75%, and in playoff games of this type should never be discounted.

Caesars has pitched ‘over 2.5 goals’ in plus money at a very decent +130, and under 2.5 at -160 The plus money bet is a decent one given how fancied the Aussies are for a comfortable win.

In the second phase of their qualifying campaign, UAE made a slow start and looked unlikely to progress from their five-team group but four consecutive wins in their last four games were enough to see them through to the next phase. In round three they were grouped with Lebanon, Syria, Iran, Iraq and South Korea but despite not getting a win on the board until game six, managed to sneak into third place in the group.

Back-to-back defeats in games 8 and 9 against Iran and Iraq looked to have ended their hopes of making into third but a fine 1-0 away in South Korea on the final matchday, while Iraq could manage only a 1-1 draw with Syria, was sufficient to see them claim the final playoff spot.

The important win in South Korea came after a change of manager, with Rodolfo Arruabarrena overseeing the UAE’s most important win in years in his very first game in charge. It was a win, against the odds, that set them up with this chance to take another step closer to only their second-ever World Cup Finals.

They warmed up for this massive game with a friendly against Gambia – ranked 123rd in the world by FIFA – but could only manage a 1-1 draw. Despite going ahead through an Ali Mabkhout penalty, the Gambians equalized and so UAE will need to show more resolve against a very decent Australia team.

Australia smashed their second qualifying group with a perfect record of eight wins from eight, scoring 28 goals and conceding just two, and carried that brilliant form into the third qualifying phase where they were grouped with China, Vietnam, Oman, Japan and Saudi Arabia.

Three straight wins in their opening three games set them up perfectly for a route to Qatar but consecutive draws against Saudi Arabia (h) and China (a) in games 4 and 5 slowed their progress. With only one more win forthcoming and then losing the last two games of the group against Japan (h) and Saudi Arabia (a), they had to settle for third place – the playoff spot.

The Socceroos warmed up for this huge clash in Doha with a friendly against Jordan – ranked 91 in the world by FIFA – and came away with a confidence-boosting 2-1 victory with goals from Bailey Wright and Awer Mabil.

While I expect this to be much closer than the odds suggest, it’s hard to make a strong case for a UAE win. Australia’s starting XI will be stronger and they have more squad depth and if they play well they should win the game.

I don’t however expect a goal-fest and it could be as narrow as a one-goal win for the Aussies.