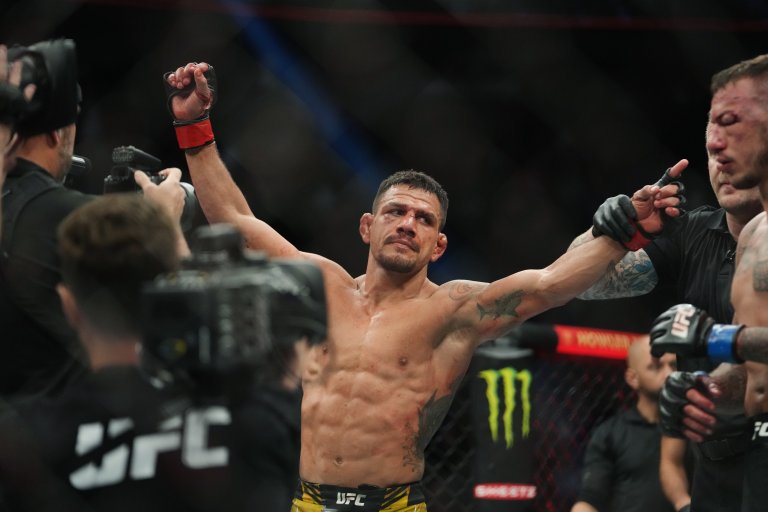 The UFC returns to the Apex on Saturday, July 9
A lightweight bout between Rafael dos Anjos and Rafael Fiziev headlines the card
See the UFC Vegas 58 odds below, along with our best bet predictions for the main card

The UFC Vegas 58 main card airs live on ESPN/ESPN+ at 9 pm ET. The table below shows UFC Vegas 58 odds for the main card at Barstool Sportsbook followed by our UFC Vega 58 best bets.

*All odds as of July 5. Get this Barstool Sportsbook promo code to bet on the UFC this weekend

The battle of Rafael’s headlines the card in what should be a very fun fight. dos Anjos is a solid striker but can also mix in his wrestling to win the rounds. Fiziev, meanwhile, is a phenomenal striker as he is based out of Tiger Muay Thai in Thailand and will throw flashy strikes to find the KO.

This will be a very intriguing lightweight matchup as this will be Fiziev’s first true tough test of his career as he fights a former champion and a top-10 opponent in dos Anjos. It will also be Fiziev’s first time going five rounds in the UFC which will be interesting see how his cardio holds up as he did get tired against Bobby Green in the third round but proved that wrong in his last fight as he got the third-round stoppage.

dos Anjos, however, has proven he can go five hard rounds and can do so using his wrestling and make it a hard grinding pace. If he has a similar game plan to his last fight, he could have a lot of success here.

I think the odds are off here as dos Anjos has more paths to victory as he is as a good enough striker to have success on the feet but it will be his wrestling and grappling that leads to him controlling the fight. Along with that, when a kickboxer/Muay Thai fighter faces a wrestler they usually will throw less kicks as they will be scared of getting taken down, and if he throws fewer kicks, RDA will only have more success.

This is a competive fight, but dos Anjos has proven his chin is there and I think the grappling will lead to him controlling the fight and gassing out Fiziev. If Fiziev doesn’t get the finish early, dos Anjos will use his wrestling and either ride out a decision or get the submission win as five rounds favor the former champ here.

Caio Borralho is set for his second UFC fight and for the second straight time he will be the co-main event as the UFC clearly sees something in him.

Borralho showed well in his last fight as he proved he can mix in the wrestling and striking well and now gets a tough challenge in Perosyan who is also set for his second UFC fight. In his debut, Petrosyan was in a war with Rodrigues as both men landed heavy shots and he showed off his power and chin.

In this fight, however, I expect Borralho to use his wrestling to take Petrosyan down and control the fight that way and ride out a decision win. Borralho is a solid parlay piece for this weekend.

Said Nurmagomedov (-278): Nurmagomedov is a very good striker that can outvolume Silva de Andrade and win a decision, while I like a parlay of Nurmagomedov and Borralho.
Jared Vanderaa (-192): Vanderaa should beat the MMA fighter as he can mix in the wrestling and outvolume Sherman to win a decision, but the line is too high to play for me.
Jamie Mullarkey (-265): It’s hard to trust Johnson and Mullarkey is the better overall fghter and will likely edge out a decision.