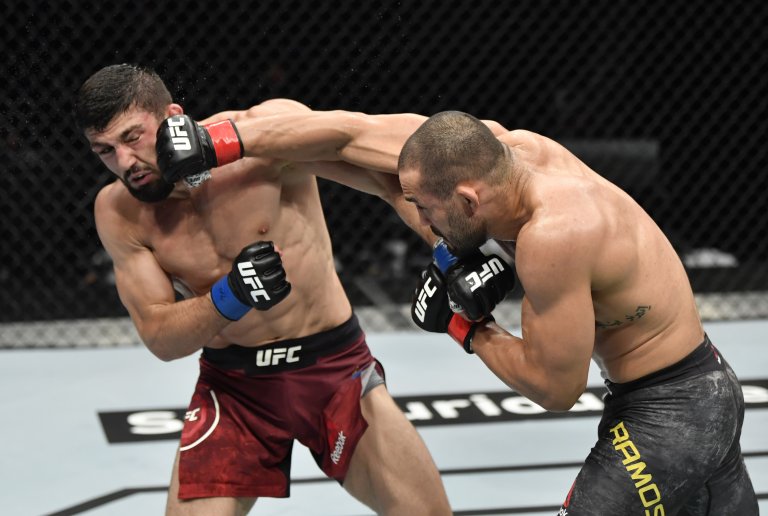 The UFC returns to the Apex in Las Vegas on Saturday, June 25
A battle of top lightweight prospects headlines UFC Vegas 57
See the UFC Vegas 57 odds below, along with our best bet predictions for the main card

The UFC returns to the fight capital of the world in Las Vegas, Nevada for a very intriguing UFC Vegas 57 card. In the main event, top-15 lightweights and two of the best prospects in the division collide as Arman Tsarukyan takes on Mateusz Gamrot. The co-main event sees Neil Magny take on rising contender Shavkat Rakhmonov.

All odds as of June 21. If you’ve already signed up at Barstool, be sure to check out this BetMGM promo code before betting on UFC Vegas 57

Arman Tsarukyan and Mateusz Gamrot finally get their UFC spotlight as both men are massive stars in Europe and will now get to showcase their skills in front of the North American audience as they headline UFC Vegas 57. The winner of this fight will likely also get a big name next time out and only be a few wins away from a title shot.

This should be a very good fight as both Arman Tsarukyan and Mateusz Gamrot hunt for the finish from start to finish and they can both finish the fight with strikes or on the ground. Tsarukyan’s only loss in the UFC was a short-notice decision loss to Islam Makhachev in what has probably been Makhachev’s toughest test of his UFC tenure.

Gamrot, meanwhile, is the former KSW featherweight and lightweight champ and has the five-round experience as he has gone the distance in five-round fights.

Although Tsarukyan and Gamrot may not have the name recognition, this should be a fight fans will want to watch as it should be fireworks from start to finish.

Early on, the two will try and find each other’s range and strike with one another with both of them likely landing good shots. But, as the fight goes on, Tsarukyan’s pace and wrestling will start to be the difference as he will mix in the wrestling and be able to land ground and pound shots.

Both men are extremely durable and I expect this one to go the distance but it will be Tsarukyan getting his hand raised as he will be able to win the rounds with more volume and his wrestling.

In the co-main event, perennial top-15 welterweight Neil Magny takes on the undefeated Shavkat Rakhmonov as this will be Rakhmonov’s toughest test and will determine if he is the real deal or not.

This is just Rakhmonov’s fourth UFC fight and he’s already getting the chance to fight someone of Magny’s caliber, this is the perfect opponent for him to make a statement and prove he’s the real deal.

We saw Magny struggle with Michael Chiesa as Chiesa was able to outwrestle him and hold him down for five rounds. Rakhmonov is likely the better wrestler and is more dangerous as he’s always going for the knockout or submission and I expect Rakhmonov will hurt Magny on the feet and then jump on a choke and tap him out in the second round to pick up the biggest win of his career. Take Rakhmonov ITD or by submission for better value.

Alan Baudot (-113): Baudot is the better striker and will be able to keep this standing and win a competitive decision.
Thiago Moises (-250): Moises will get this to the ground quickly and submit Giagos. He’s a solid parlay piece for this weekend.
Umar Nurmagomedov by submission: Nurmagomedov will take Maness down at will and eventually get the submission win.
Chris Curtis (-157): If Curtis can survive the first round by keeping it standing, which I expect him to do, he’ll start landing big shots and find the second round TKO.