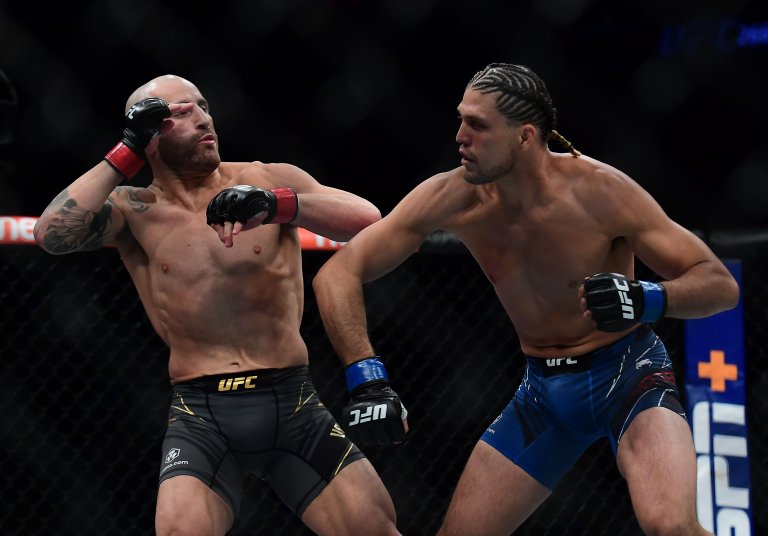 UFC action returns to Long Island on Saturday afternoon
Top-ranked featherweight contenders clash in the main event as Brian Ortega battles Yair Rodriguez
Read on for all the UFC Long island odds, along with with all our best bet predictions

The UFC returns to Long Island for the first time since 2017 for UFC on ABC 3 on Saturday, July 16. Brian Ortega takes on fellow featherweight Yair Rodriguez in the main event, while the co-main event features a UFC women’s strawweight clash between Michelle Waterson and Amanda Lemos.

Fight fans should prepare for an early start at UBS Arena in Elmont, New York. UFC Fight Night: Long Island prelim action gets underway on Saturday morning at 11:00 am ET on ESPN+, followed by the main card at 2:00 pm ET on ABC.

Ortega is the No. 2 ranked contender in the 145-pound division despite appearing in the octagon just three times over the past four years, a run that includes a pair of defeats.

Rodriguez trails at No. 3 in the UFC featherweight rankings. But consistent success has eluded El Pantera during a sparse five-fight run that dates back to 2017.

A fearsome finisher early in his career, “T-City” has seen his past three fights extend into championship rounds, with mixed results. The 31-year-old was outclassed in his first bid for the 145-pound strap, a five-round unanimous decision loss to Max Holloway at UFC 231.

Holloway landed 134 significant strikes against Brian Ortega in Round 4, leading to a doctor stoppage in their fight at UFC 231. pic.twitter.com/cj0KKHVM7R

Following a 22-month layoff, Ortega rebounded with a unanimous decision win over the Korean Zombie in an epic five-round clash at UFC Fight Island 6, earning him another title shot. But Ortega was out of his league at UFC 266 against Volkanovski, despite his late-fight heroics, as the champion outstruck him by a wide 214-88 margin, while also dominating on the mat.

Brian Ortega returns to action for the first time since his title fight against Alex Volkanovski.

Though he was dominated during the majority of the fight, Ortega ended the 5th round strong by edging out Volkanovski on the Verdict Scorecard.#UFCLongIsland pic.twitter.com/EOI8YUpnxU

T-City ranks among the leading UFC featherweights in finishes, submissions, knockdowns and submission attempts, and enjoys plenty of experience in championship rounds.

Opportunity knocks for Yair Rodriguez, who claims to have been promised a title shot if he can win on Saturday. Like Ortega, El Pantera went five rounds against Holloway last time out. But was dominated in every aspect of the fight on his way to a unanimous decision win.

Max throws a lazy leg kick to bait Yair to throw one back and takes him down with the double leg.
you just got played by NCAA Div I Holloway. pic.twitter.com/1r1ybD2idi

Victorious in 11 of his first 12 fights, Ortega has tallied just two wins in his past five outings. That run started with a crushing KO loss to Frankie Edgar, while his recent victories over Jeremy Stephens and Korean Zombie came by the narrowest of margins.

The 29-year-old sits among the UFC featherweight leaders in strikes landed, and has never been knocked down in the octagon. However, he has been taken down six total times over his past two fights, a trend that does not bode well against a submission specialist like Ortega.

Michelle Waterson is desperate for a victory after losing three of four contests, capped by a unanimous decision loss to Marina Rodriguez at UFC Vegas 26. “The Karate Hottie” has seen eight straight contests settled by the judges including a trio of split decisions.

The devastating strikes of Michelle Waterson.

While that run has proven her durability, Waterson could benefit from a return to the ferocious ground game that powered her to nine tap-out wins in her first 18 pro fights.

With the win, Lemos is now 3-0 at strawweight

Currently pegged at No. 11 in the rankings, Lemos owns devastating punching power, and has finished opponents inside five minutes in eight of her 11 career wins.

Muslim Salikhov (-186): The unheralded veteran welterweight currently enjoys five-fight win streak that features two victories. He also sports impressive defensive skills, which should be enough to get him past Li Jiangling despite a significant reach disadvantage.
Lauren Murphy (+165): Murphy got beat up in a fourth-round TKO loss to champion Valentina Shevchenko last fall, ending a four-fight win streak. However, “Lucky” has largely dominated while winning six of eight since moving down to the UFC flyweight division in 2017.
Jack Shore (-177): Many observers were surprised this clash didn’t make the main card. Indeed, Shore has emerged as a sensation during a 16-0-0 start to his career, and has needed just five fights to establish himself as one of the top strikers and takedown specialists among UFC bantamweights.