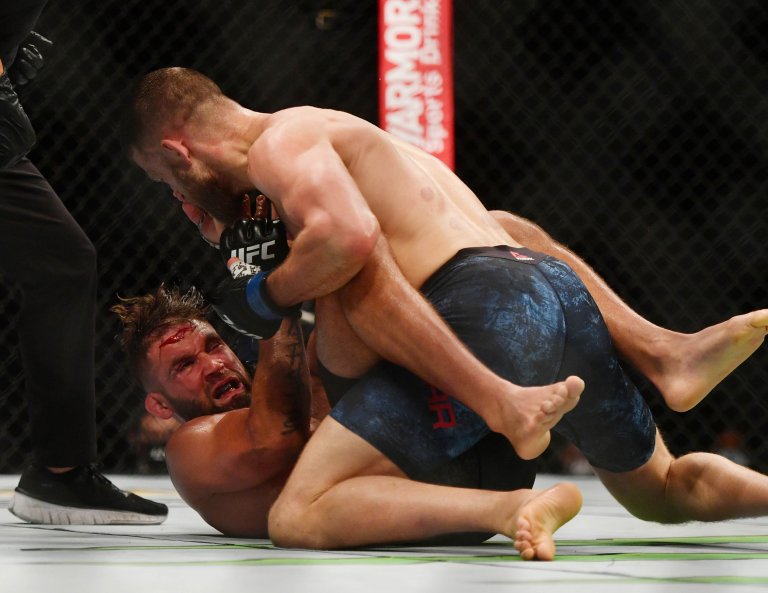 The UFC heads to Austin, Texas on Saturday, June 18
A pivotal featherweight bout between Calvin Kattar and Josh Emmett headlines the card
See the UFC Vegas 57 odds below, along with our best bet predictions for the main card

The UFC returns to the state of Texas but this time in Austin for a very solid Fight Night card on Saturday, June 18. In the main event, top-10 featherweights collide as Calvin Kattar takes on Josh Emmett where the winner could very well earn a title shot. The co-main event pits lightweight legends against one another as Donald ‘Cowboy’ Cerrone faces Joe Lauzon.

The UFC Austin main card airs live on ESPN at 7 pm ET. The table below shows UFC Austin odds for the main card at Barstool Sportsbook followed by best bets.

*All odds of June 14. Check out this Barstool Sportsbook promo code before betting on the UFC

Calvin Kattar will headline his fourth straight main event while Josh Emmett will return to the main event spotlight as a title shot could be on the line for the winner as both men have never fought the champ. They both are also fan favorites given they are primarily strikers with legit one-punch KO power, especially Emmett who might be the hardest-hitting featherweight on the roster.

Kattar has proven he can go five rounds and do so at a high output while Emmett will be headlining his second UFC event and has never gone the distance so how his cardio holds up is to be seen. Whether or not Emmett will be able to KO Kattar is also a big question mark heading into the fight as Kattar has shown off a great chin and is as durable as they come.

Both Kattar and Emmett are strikers as Kattar is a technical boxer while Emmett is more of a brawler who searches for that one-punch KO, which he can land. In his last seven fights, Emmett has recorded 11 knockdowns proving how powerful he is.

However, as we saw in the Holloway fight, Kattar can take a lot of shots and keep moving forward but whether or not he can take a punch from Emmett is to be seen. The wrestling will likely negate each other as well as both men have good takedown defense and aren’t known for their striking.

Ultimately, I expect Emmett to have moments early on and likely hurt Kattar at some point in the fight but it will be Kattar’s volume and pressure that will be the deciding factor. Kattar will turn it up as the fight goes on and end up winning a decision in a very fun fight. Kattar at -240 is getting too high but he can be a parlay piece or look for Kattar by decision to get better value.

In the co-main event, a pair of legends and potentially future UFC Hall of Famers share the Octagon as Donald Cerrone takes on Joe Lauzon. The two were booked to fight at UFC 274 but the morning of the fight, Cerrone got food poisoning and the fight was postponed until now.

Back at UFC 274, I liked Lauzon as the underdog and my pick doesn’t change, instead, I’m more confident. The cut down to lightweight is a hard one for Cerrone who now had to do it twice in a month and his chin was already a concern and at lightweight that only is more of a concern.

I expect Lauzon to blitz Cerrone early and land big punches and eventually get the first-round TKO as Cowboy is a known slow-starter.

Kevin Holland (-240): Holland’s striking will be too much for Means and will find the first or second round TKO.
Albert Duraev (-215): Duraev will be able to take Buckley down at will and eventually find the ground and pound TKO.
Damir Ismagulov (-175): Ismagulov should be able to out volume Kutateladze and win a competitive decision.
Julian Marquez (+165): Marquez has a ton of power and a good ground game but can land the better strikes and edge out a decision as this is a pick’em fight to me so you have to take the +165.