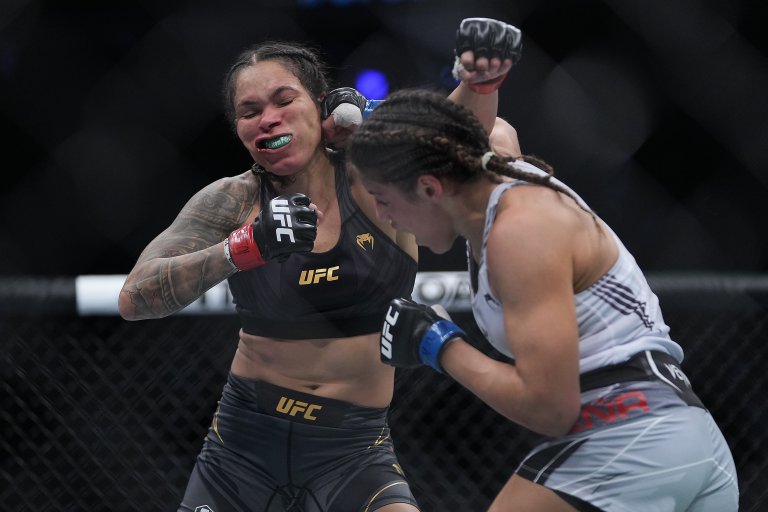 Two championship belts will be up for grabs on Saturday July 30, when the UFC returns to Dallas, Texas for UFC 277. Julianna Pena looks to defend the UFC women’s bantamweight title for the first time as she enters the octagon for a main event rematch with former champ Amanda Nunes. The co-main event features a long-awaited rematch as Brandon Moreno battles Kai Kara-France for the interim UFC flyweight belt.

Early prelims get underway at 6:00pm ET at American Airlines Center, with the main card set to kick off at 10pm ET, with all the action available on Pay-per-view.

Julianna Pena aims to eliminate any doubts that may linger following her stunning second-round submission victory over Amanda Nunes seven months ago at UFC 269.

Now pegged at the top contender in the UFC women’s bantamweight rankings, Nunes returns to action aiming to avenge her first loss in seven years.

Pena shook up the MMA world by claiming the UFC bantamweight strap from Nunes in such decisive fashion. In addition to marking her second straight win by tap out, Pena also established her first win streak in five years with her victory last December.

Juliana Peña’s historic upset over Amanda Nunes who is widely considered to be the pound-for-pound best female MMA fighter in the world. The footage after is the ensuing pandemonium of shocked UFC fighters sitting in the front row. Unbelievable. What a historic moment! pic.twitter.com/dPt37FGdPe

“The Venezuelan Vixen” continues to struggle to garner support at the sportsbooks. The 32-year-old defeated Nunes as a distant +700 underdog, and has sported positive odds in five of six fights, going 4-2-0 over that stretch.

Pena has demonstrated her ability to finish opponents standing or on the mat. Her two recent tap out wins are a reminder of her dominance as a submission specialist early in her career. However, her lack of experience in championship rounds is a major concern, if she is unable to once again tally an early finish.

Nunes saw an impressive 11-fight win streak that featured seven title defenses snapped by last December’s loss to Pena. Despite that setback, Nunes remains the winningest UFC women’s bantamweight fighter of all time, with 11 victories and eight finishes, including six by KO or TKO.

Seven of the wins during that 11-0-0 run came inside five minutes, including a knockout win over Cris Cyborg just 51 second into their UFC 232 clash, which earned her the UFC women’s featherweight belt she still holds. In addition, she outlasted opponents in five-round matches four times during her reign as 135-pound champion.

Known for her impressive physical strength, Nunes has never been knocked down in the octagon, and has been taken down on just three total occasions over her past 12 contests.

Brandon Moreno needed a full three rounds to claim a unanimous decision win over Kara Kai-France when they first met at UFC 245. “Assassin Baby” is coming off an epic trilogy of fights with reigning champion Deivison Figueiredo, going 1-1-1, but failing to hold onto the belt. However, the value of that experience cannot be overstated.

Brandon Moreno is coming off of 3 consecutive fights against Deiveson Figueiredo.#UFC277 pic.twitter.com/lQXlzteiSl

Seven of his past 10 fights have gone the distance, but Moreno’s skills as a submission specialist should also not be underestimated, considering he forced tap outs in 10 of his first 17 fights.

Kai-France has climbed to No. 2 in the UFC flyweight rankings during a three-fight win streak that includes impressive first-round KO victories over Cody Garbrandt and Rogerio Bontorin.

“Don’t Blink” enjoyed steady success fighting at 135 pounds earlier in his career, and has gone 7-2-0 since returning to flyweight, with six of the contests getting decided by the judges. But unlike Moreno, Kai-France lacks experience both in championship clashes and championship rounds.

Other UFC 277 Odds and Picks

Sergey Pavlovich (-134): Derrick Lewis may enjoy the backing of fans in attendance, but it is Sergey Pavlovich offering value at the sportsbooks in the wake of three straight first-round KO wins.
Alexandre Pantoja (-159): Currently pegged as the No. 4 UFC flyweight contender, Pantoja is undervalued in his date with Alex Perez, who has not made an octagon appearance in almost two years.
Anthony Smith (+350): Fresh off three straight finishes, Smith is a worthy value bet against Magomed Ankalaev, who has had his hands full while tallying three straight wins by decision.