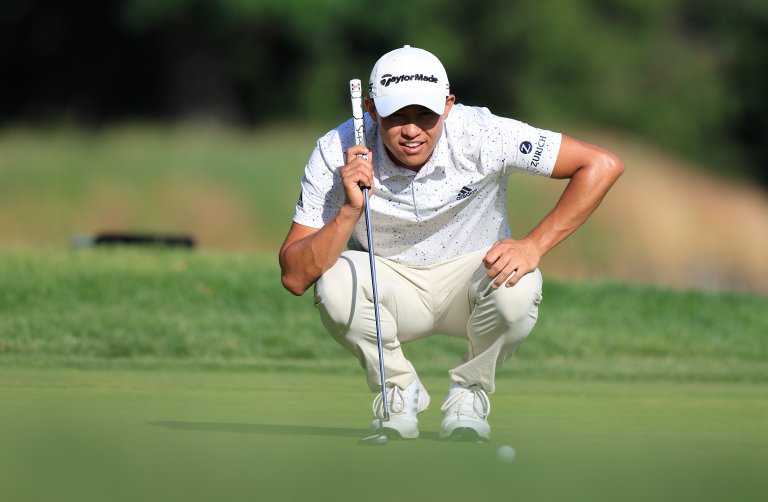 Jun 17, 2022; Brookline, Massachusetts, USA; Collin Morikawa lines up a putt on the eighth green during the second round of the U.S. Open golf tournament. Mandatory Credit: Aaron Doster-USA TODAY Sports

Collin Morikawa and Joel Dahmen co-lead the U.S. Open by one shot over five golfers after round two
15 players are within three shots in a jam packed leaderboard
See the updated 2022 U.S. Open odds below for Saturday’s third round below

Through two rounds of the U.S. Open, it’s a wide open golf tournament with not much separation amongst the leaders. Collin Morikawa, who entered the week with +3000 odds to win outright is tied with Joel Dahmen for top spot. Lurking just one shot behind them are last week’s winner Rory McIlroy and defending champion Jon Rahm, who were the top-two favorites when play started Thursday. A further shot behind is Scottie Scheffler, who won the Masters in April.

There are some notable names that won’t be around for the weekend at the Country Club in Brookline, MA. They include Phil Mickelson, Cameron Smith, Viktor Hovland and Tony Finau, among others. The cut came at 3-over-par, which is eight strokes off top spot.

Read on to see the updated odds and best value bets heading into moving day for Saturday’s third round.

Odds as of June 17th at DraftKings Sportsbook

Of the three heavyweights, Rahm is first in the field in SG: off-the-tee, Rory has been the better of the three in approach and putting and Morikawa best around the green. It truly is a pick’em between the three combatants.

Only Brooks Koepka has won back-to-back US Open’s since the 1980’s (something Rahm is attempting to accomplish), while Rory hasn’t won a major in eight years, and Morikawa has two different majors the last two seasons. Given that we were high on Collin before the event at +3000, no sense in straying away from that.

Scottie Scheffler (+700): Reigning Masters champ Scottie Scheffler is still very bettable at this number, as he sits just two shots adrift. Friday he put together a strong 3-under, 67, which included three birdies and an eagle. He’s first in strokes gained approach and fourth off-the-tee through two days. Scheffler has four victories on the campaign, and is fourth in third round scoring average.
Xander Schauffele (+2800): A strong value play can be found in Xander Schauffele, who enters the weekend just four off the pace. In his first five career US Open’s, he’s been no worse than T-7th, and all four of his stroke play titles on the PGA Tour he’s been the chaser, so he’s shown the ability to emerge from back in the pack. He’s sixth in SG: short game, plus the X-Man is second in Saturday scoring average.