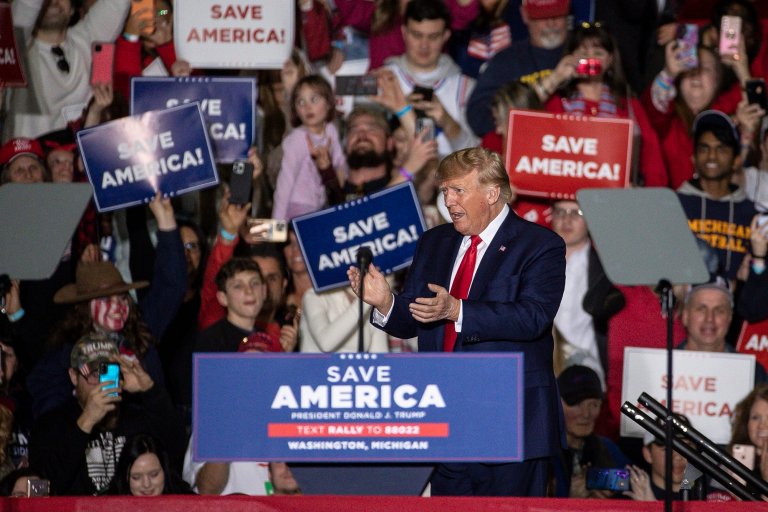 Former President Donald Trump at a rally in Washington, Mich., on April 2, 2022.

Donald Trump, US President from 2017-20, is the +250 favorite to regain the White House in the 2024 US Presidential election odds
Fellow Republican Ron DeSantis is the second betting choice at +300
Incumbent Democrat Joe Biden is next in this betting market at +550

The Trump train was derailed during the 2020 US Presidential election. Oddsmakers are seeing it getting back on track in 2024.

Republican Donald Trump is the +250 betting favorite in the opening 2024 US Presidential election odds. Trump won the White House in the 2016 election, serving as US President from 2017-20. However, he was defeated in the 2020 election by Democrat Joe Biden.

Odds as of July 19 at DraftKings Sportsbook Ontario.

Democrats have won three of the past four US Presidential elections. The last Democrat incumbent to be defeated was Jimmy Carter in 1980. Grover Cleveland is the only President in US history to serve a term, suffer defeat in his reelection bid and then regain the White House four years later. Cleveland served as both the 22nd and 24th President of the United States.

Is Trump Going to Run?

It would appear at this stage in the Republican nominee odds that the nomination for President in 2024 will be Trump’s if he wants it. But does he want it? That depends on who you ask.

Those who know Trump well insist that he has no desire to run for the Presidency again. Trump’s only goal is to be grifting as much money out of his supporters as he can between now and 2024.

“Trump has spoken about how when you are the president of the United States, it is tough for politically motivated prosecutors to ‘get to you.’ He says when he is president again, a new Republican administration will put a stop to the investigation.”—Rolling Stone

On the other hand, there’s also a camp that is strongly of the belief that Trump will announce his candidacy for the White House sooner rather than later. In fact, his plans could be revealed as early as September.

That’s not good news for the Republican Party. They’re hoping to make significant gains in the House and Senate during the 2024 midterms. Republicans want the midterms to be a referendum on Biden’s Presidency. If Trump throws his hat in the ring before the midterms, it could upset that applecart.

There’s also a constituency that believes Trump desperately wants to return to the White House, if for no other reason than to avoid criminal prosecution for at least another four years.

Is DeSantis the Heir Apparent?

Behind the scenes, there appears to be a quiet groundswell of support with the Republican hierarchy to move on from Trump. They’re seeing Florida Governor Ron DeSantis as the perfect follow to Trump.

Trump is actually afraid of DeSantis. What comes next after Trump announced his new candidacy for the Presidency should be really fun to watch. #ThereCanBeOnlyOne

Politically, DeSantis offers the same agenda that Republicans want to put forward across the country. However, he’s more polished and professional than Trump. He might fare better at swaying moderates than the bombastic Trump.

Biden is hinting that he’s considering a second term, even though he’ll be 81 years old in 2024. It’s entirely possible that both members of the senior political tour – Trump and Biden – will have been put out to pasture by 2024.

That being the case, it might be wiser to look for value in other contenders in the Democratic nominee odds. It’s unlikely that Kamala Harris would get the nod. Vice-Presidents generally don’t do well in runs for the Presidency.

That’s where they come down on this issue.

There will be a groundswell of support for California Governor Gavin Newsom. And don’t count out Pete Buttigieg. He’s a great orator and a fighter. The Democrats could use someone at the helm who’s ready and willing to spar with the Republicans.