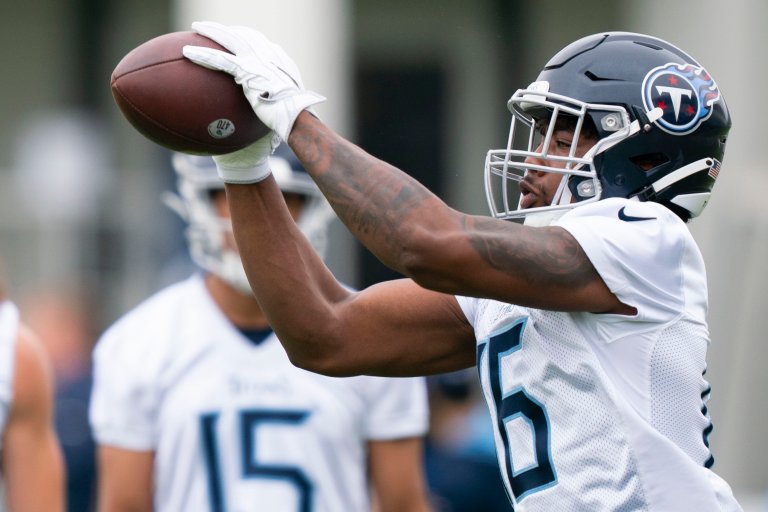 Treylon Burks wasn’t the first wide receiver selected in this year’s NFL Draft. In fact, he lasted until the 18th pick before being taken by the Tennessee Titans.

However, the oddsmakers have made Burks the favorite to lead rookies in receiving yardage in the upcoming NFL season. He is listed as a +450 choice.

Burks is followed by the Atlanta Falcons’ Drake London and the New Orleans Saints’ Chris Olave. Both are at +550.

Odds as of July 29th at DraftKings

Burks Tops the Board

Burks had a fine season for Arkansas last fall. He caught 66 passes for 1,104 yards and 11 touchdowns.

However, Burks drew cause for concern when he quickly departed the Titans’ first practice of OTAs in May because of asthma. However, Tennessee believes Burks has the condition under control and health will not be a long-term factor.

Many scouts compared Burks to AJ Brown when he played at Arkansas. It turns out Burks will now try to replace Brown, who was traded to the Philadelphia Eagles during the draft.

Burks should immediately be a focal point of the Titans’ offense and quarterback Ryan Tannehill as WR2 behind Robert Woods, who is coming off a knee injury.

The Falcons selected London eighth overall – making him the first receiver taken — even though he was limited to eight games last season because of a broken ankle. He still compiled huge numbers with 88 receptions for 1,084 yards and seven TDs.

Marcus Mariota to Drake London. Hope to see a lot of this in 2022…#Falcons pic.twitter.com/HZJomwxjxw

London was a three-year starter for the Trojans and steadily increased his production, averaging 43.5 receiving yards a game as a freshman, 83.7 as a sophomore, and 135.5 as a junior.

London has +700 NFL OROY odds, second to Pittsburgh Steelers quarterback Kenny Pickett, who is at +550.

Olave went to the Saints at No. 11 after starring at Ohio State. Last season, he had 936 yards and 13 touchdowns on just 65 receptions.

Jameson Williams likely would have been the first WR off the board if he had not blown out a knee in Alabama’s loss to Georgia in the CFP Championship Game. The Lions still took him at No. 12 and, despite slowly returning to action, is worth at least a small speculative wager at +2500.

An interesting longshot play is the Buffalo Bills’ Khalil Shakir, who has +10000 odds after being a fifth-round pick from Boise State.

A fluid athlete that wins before and after the catch with sticky hands, solid route running, and pure athleticism

I am excited to watch him at the 2022 Senior Bowl pic.twitter.com/I8pw6pNj6H

Though the Bills have Stephon Diggs and Gabe Davis as their primary wideouts, the underrated Shakir has the talent to rack up yards from the slot.

Buffalo also ranks ninth from the bottom in NFL strength of schedule.

London has recovered from his ankle injury and is expected to be a full-go for the Falcons in Week 1. Atlanta is in rebuilding mode and lacks depth wide receiver. It makes London the pick here to lead NFL rookie receiving leader in 2022.