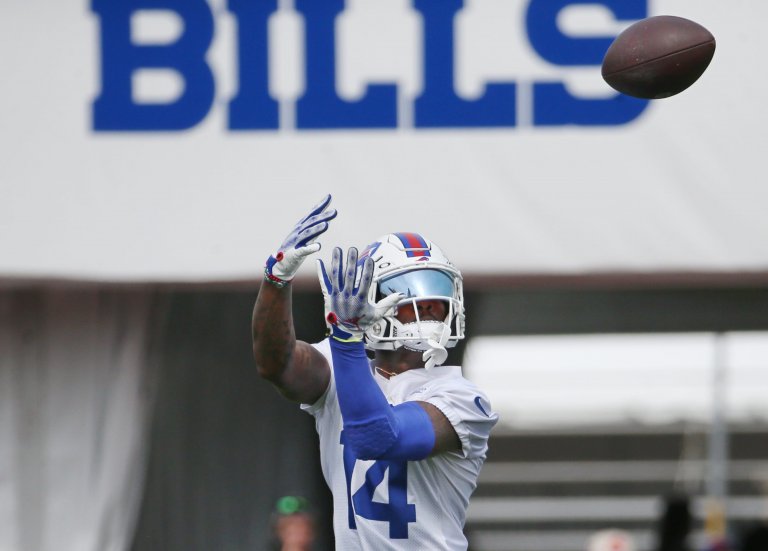 Bills receiver Stefon Diggs reaches out for an over the shoulder catch up the middle on the fourth day of the Buffalo Bills training camp at St. John Fisher University in Rochester Wednesday, July 27, 2022.

The Buffalo Bills top the 2022 NFL against the spread power rankings
Directly behind the Bills are the Tampa Bay Buccaneers, Los Angeles Rams and Green Bay Packers
History suggests one of these teams going to the Super Bowl and one will be missing the NFL playoffs

The Buffalo Bills, Tampa Bay Buccaneers, Los Angeles Rams and Green Bay Packers are the big four in the SBD against the spread NFL power rankings for the 2022 NFL season.

That’s going to be great news for one of these teams and terrible news for another.

Something else to keep in mind when weighing NFL future bets –  at least one team from the top four in ATS +/- has missed the playoffs in each of the last seven seasons.

Which of the Bills, Buccaneers, Rams or Packers is likely to be Super Bowl bound this season? Who among this quartet of powerhouse NFL clubs is going to take a Humpty Dumpty-like tumble from their lofty preseason perch and miss out entirely on the NFL postseason?

Let’s look at both of these scenarios. But first, let’s delve a little deeper into how the SBD ATS NFL power rankings work.

The SBD ATS NFL power rankings differ from traditional power rankings. They factor into the calculation both SBD editor-in-chief Matt McEwan’s NFL strength of schedule calculations, in combination with the +/- of the team’s total betting odds from the opening lines of every game for the 2022 season. This system is rooted in numbers and data and eliminates the element of pure speculation.

“You go up here knowing you have an opportunity to win a Super Bowl every time.” pic.twitter.com/ric1Weiqks

The 2021 NFL season proved to be a unicorn in terms of these trends. For the first time, all of the top-3 teams in the NFL ATS power rankings qualified for postseason play. However, none of them reached the Super Bowl. The Chiefs were closest, losing to Cincinnati in the AFC Championship Game.

Which Team Is Going to the Super Bowl?

Oddsmakers are of the opinion that this is finally going to be the year for the Buffalo Bills. In NFL betting, they’re the +350 favorite to win the AFC in the NFL Conference odds. Buffalo is also the +650 chalk to lift the Lombardi Trophy in the Super Bowl odds.

Seeing as the Bills are the only AFC team in the top-4 of the NFL ATS power rankings, that bodes well for their chances.

Seeking a Super Bowl winner in this group, the Tampa Bay Buccaneers are the choice. Tom Brady has spent his career bucking the odds and doing things not accomplished by any other player in the history of the game. Winning his record eighth Super Bowl at the age of 45 would be the cherry on top of his amazing career.

It’s not just a sentimental pick for Brady, however. Tampa Bay is loaded on both sides of the ball. The Bucs just added future Hall of Famer Julio Jones to arguably the most talented offensive skill group in the game. And offseason moves strengthened the club’s main weakness, the secondary.

Which Team Will Miss the Playoffs?

In a pass-happy league, the Green Bay Packers lost their #1 receiver, Davante Adams, to the Las Vegas Raiders. In fact, only one of the Packers’ top-4 targets from last season is back.

Quarterback Aaron Rodgers, like a lot of Green Bay’s core players, is well into the back nine of his NFL career. Two starting offensive linemen are gone and a third is already injured.

Minnesota is right there with the Packers – the Vikings are 7-6-1 straight up in the past 14 games against Green Bay – and Detroit will be much-improved. While Green Bay was gutting the roster to get under the cap and be able to pay Rodgers, the Vikings were upgrading the roster.

In the NFL playoff odds, Green Bay could be in trouble.