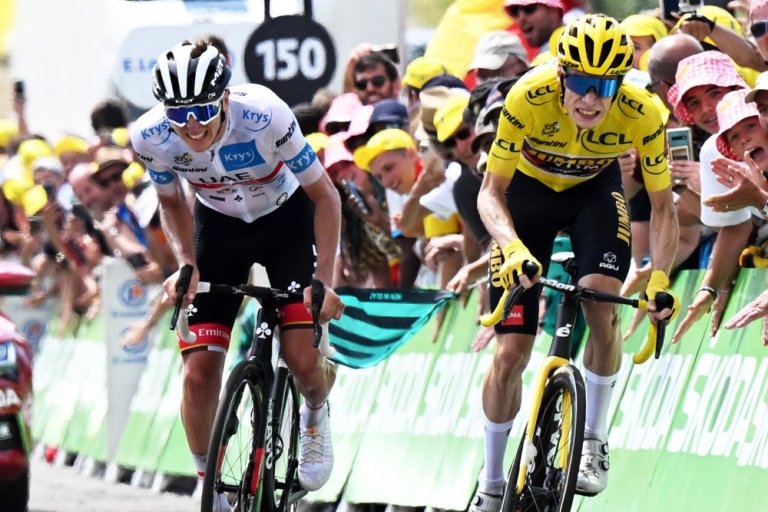 PEYRAGUDES, FRANCE – JULY 20 : Pogacar Tadej (SLO) of UAE Team Emirates and Vingegaard Jonas (DEN) of Team Jumbo-Visma sprinting to the finish line during stage 17 of the 109th edition of the 2022 Tour de France cycling race, a stage of 130 kms with start in Saint-Gaudens and finish in Peyragudes on July 20, 2022 in Peyragudes, France. (Photo by Photo News/Panoramic/Icon Sportswire) ****NO AGENTS—NORTH AND SOUTH AMERICA SALES ONLY****

Stage 20 of the Tour de France (Saturday, July 23) is the second Individual Time Trial
The 40.7 kilometres route between Lacapelle-Marival and Rocamadour is a little bumpy but undaunting
Who are the best Tour de France Stage 20 picks considering the odds?

On Thursday Jonas Vingegaard all but clinched the Tour de France. His Jumbo–Visma teammate Wout van Aert had already sewed up the green jersey. Friday, Christophe Laporte took what looked like a sprint stage, really rubbing in Jumbo’s dominance over this year’s race.

Vingegaard begins Saturday’s time trial, the last competitive stage of the race (Sunday’s low key arrival in Paris is mostly ceremonial) with a commanding 3:26 advantage over two time defending champ Tadej Pogacar. Geraint Thomas is eight minutes behind the leader, but more than three minutes ahead of fourth place David Gaudu. So, it appears the podium positions have been clinched.

Stage 20 (7:05 am ET) begins early on Saturday, but the leaders don’t get going until almost four hours later. While GC riders may be in the mix for the stage victory, Filippo Ganna is largely in the field for days like this, and van Aert has arguably been the most impressive rider over three weeks, and can do it all. Who will be the fastest on the ITT?

Odds as of July 22 at DraftKings Sportsbook.

Laporte made the winning move on Friday, getting the jump on the pure sprinters by bridging the gap to the breakaway, and then holding off the pure speedsters. It has been that type of race for Jumbo–Visma, it seems like every move they make is a winning one.

There’s not a lot to the ITT course aside from it’s length. It’s an undulating and long time trial, with two short climbs at the end.

Let’s break down Saturday’s field while making note of the odds.

It would be disappointing if van Aert didn’t get the chance to lead a team in the next year or two. Someone who can win sprints, escape in a breakaway, or achieve victory in the mountains is a unicorn. He was the runner-up on the Stage 1 time trial, and the climbing at the end of this course could be the difference for a multi-talented rider.

There is no doubting van Aert regardless of what a stage looks like. This one seems suited to him.

He was fourth on Stage 1 this year. Ganna is riding in his first ever Tour, but in two tries at the Giro d’Italia, he has six stage victories.

You always look to the GC riders at this stage in the race. They are still fighting for something, are motivated, and have proven to be the strongest.

Vingegaard has nothing to prove. He only needs to be respectable and the Yellow Jersey is his. That said, he was seventh on Stage 1, and there is a reason he is winning the race.

While Vingegaard took advantage when Pogacar showed weakness, after winning the last two years, and taking three stages this year, Pogacar would surely like to take another consolation prize.

Pogacar’s ITT victory in the mountains on Stage 20 two years ago, taking the Yellow Jersey from Primož Roglič is one of the great comebacks in cycling history. Repeating that Saturday to win the stage is possible, to win the race seems impossible.

Pogacar finished third on Stage 1 this year, while Thomas was 18th. Thomas finished 25 seconds behind stage winner Yves Lampaert. During his career Thomas has had a lot of success in time trials, and he’ll be all out to try and win on Saturday, and secure a podium spot.

Thomas has won three career Tour stages, and won the general classification in 2018.