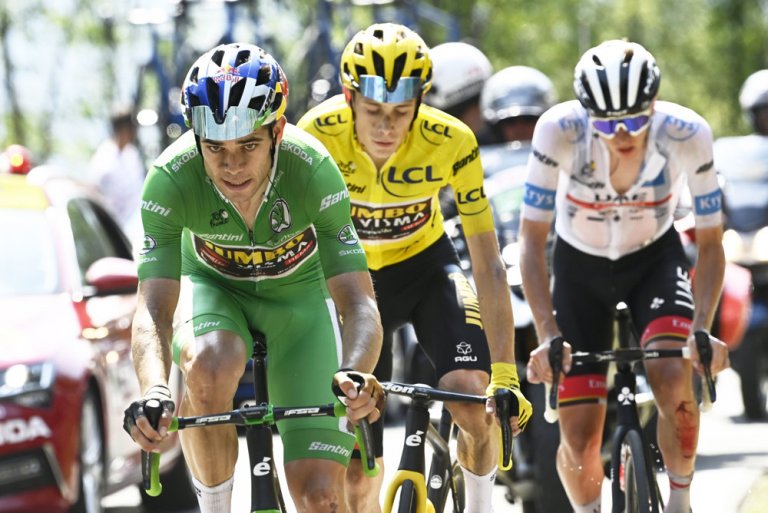 HAUTACAM, FRANCE – JULY 21 : Van Aert Wout (BEL) of Team Jumbo-Visma, Pogacar Tadej (SLO) of UAE Team Emirates and Vingegaard Jonas (DEN) of Team Jumbo-Visma during stage 18 of the 109th edition of the 2022 Tour de France cycling race, a stage of 143 kms with start in Lourdes and finish in Hautacam on July 21, 2022 in Hautacam, France. (Photo by Photo News/Panoramic/Icon Sportswire) ****NO AGENTS—NORTH AND SOUTH AMERICA SALES ONLY****

On Thursday Jonas Vingegaard likely salted away the Tour de France. He won the final stage in the mountains, and widened his lead over two time defending champion Tadej Pogacar to 3:26 with only a flat stage, individual time trial, and ceremonial saunter into Paris remaining.

While Vingegaard and Team Jumbo–Visma can begin to celebrate, sprinters who survived the mountains should be raring to go Friday. Who has legs left, and whether a breakaway can steal the day are the big questions on an afternoon that features only two mild Category 4 climbs in addition to many long flat stretches.

Stage 19 (7:05 am ET) gets going early Friday. Aside from the two short uphills towards the end, it finishes on a false flat but is mostly straightforward and undaunting. Which sprinters have legs remaining, or who can steal the day? Let’s look at some top betting options.

Odds as of July 21 at DraftKings Sportsbook.

Though the big moment at this year’s Tour was Pogacar cracking and Vingegaard seizing control on Stage 11, Wout van Aert dominating the Green Jersey competition while supporting Vingegaard and winning a pair of stages has been incredibly impressive. There are two ways van Aert can win the day on Friday. He can sprint to victory, or breakaway to triumph.

While van Aert has had an amazing race regardless of what takes place on Stage 19, for sprinters that have not won daily honors yet and survived the climbs, the time is now.

Will it be a sprinter like Fabio Jakobsen, Dylan Groenewegen or Jasper Philipsen that has already won on this year’s Tour, another speedster, or a breakaway that takes the day?

Let’s look at Friday’s top options and consider where a bet could be worthwhile.

Wout van Aert has been a revelation to the Tour de France over the past few years. He can win a wide variety of stages, acts as a super domestique, and probably deserves an opportunity to compete as a GC contender moving forward.

There is almost never a stage van Aert is not a factor. It wouldn’t be surprising at all if he boldly tried to win this stage in a break. At the same time, he can win in a traditional sprint too. He finished second in the three prior true sprints of this year’s Tour.

Over the years a dominant sprinter often materializes during the Tour. Sometimes that rider kills it early in the race, but doesn’t survive or is out of legs once the major climbing ends. This year the sprints have been divided among several riders.

Jakobsen is among the second tier of green jersey points this year. He survived Wednesday’s penultimate day in the mountains finishing 15 seconds ahead of the time cutoff. He would have thrown in the towel had he not been eyeing one more day of glory.

The win was his fifth all time on the Tour, and first since 2019.

The 24 year old won the points classification at the Tour of Turkey and UAE Tour this year. Three times he has won stages at the Vuelta a España.

Alexander Kristoff has not yet won a stage this year, and he hasn’t appreciated the weather. That said, he is more than capable.

Kristoff has won four individual Tour stages. It isn’t expected to be all that hot Friday either.

Caleb Ewan has had a really tough go of it this year, and rumors are circulating. That said, he’s still standing, has had plenty of success, and wouldn’t have pushed forward if he didn’t think there was a reward at the end.

Ewan has banked five Tour stages during his career.